Obscurity of the Day: Around Harlem 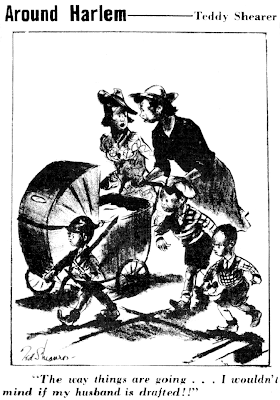 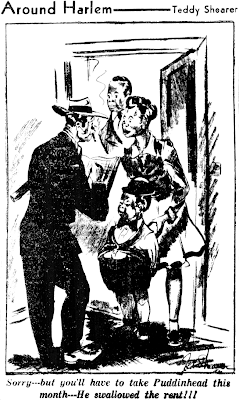 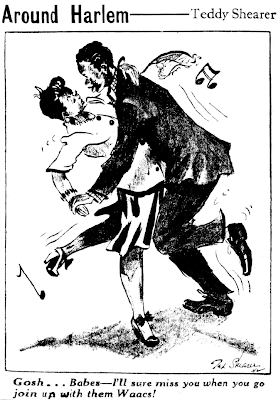 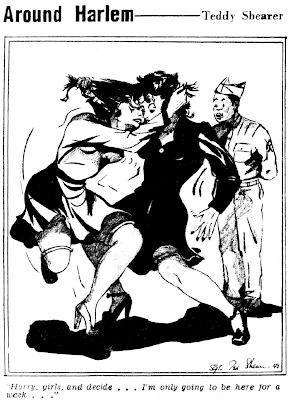 Even though Ted Shearer was a tender 23 years old when Around Harlem debuted on February 14 1942, he was already a veteran hand, having already been contributing art to newspapers for five years by that time. Around Harlem, though, is the feature in which he really seemed to hit his stride as an impressive and self-assured cartoonist, as the above samples more than adequately attest.

Around Harlem doesn't seem to have been syndicated, but only used in the New York Amsterdam News. If it was syndicated the name of the feature might well have been altered to make it less NYC-centric, so I may have seen it elsewhere and not recognized it as the same feature.

Around Harlem was produced while 'Teddy' Shearer was in the service in the heat of World War II, so it's no surprise that many of the gags were about the war and the military. I don't know what Shearer's role was in the 92nd Division of the Army, but it seemed to afford him adequate time to draw his feature on a regular basis. Considering how spotty the production of other features were in the black papers, Shearer was a paragon of punctuality; rarely did he miss a weekly edition.

Around Harlem was discontinued on March 11 1944 in the Amsterdam News in favor of another Shearer panel cartoon, one we'll discuss in tomorrow's post...