Obscurity of the Day: Lohar 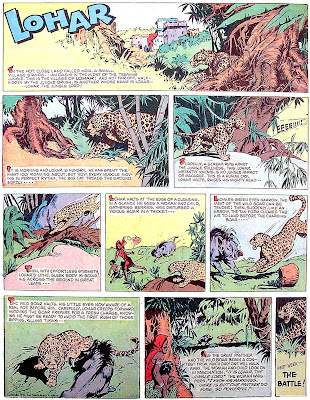 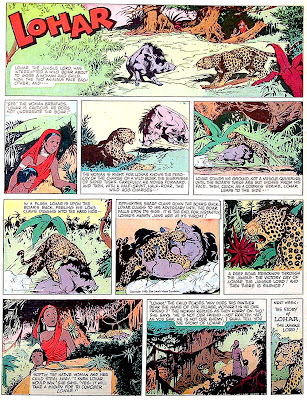 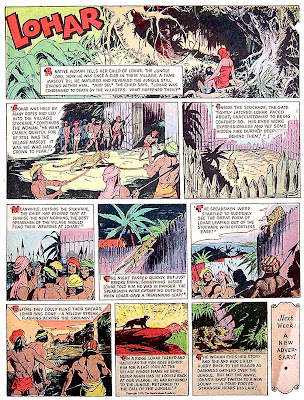 By far the most unusual of the new strips that debuted in the Pittsburgh Courier's color comics section in 1950 was Lohar. I believe this may be the only dramatic newspaper strip ever to star a wild animal in its natural habitat. Not only was the premise unusual, but the strip was really well-written and drawn.

Lohar is the story of a leopard in northern India, and the title of the strip comes from the name of a warrior caste there. Eventually the strip gets rather strange -- the leopard at one point ends up in the Arctic -- but I have read only isolated episodes so I just can't say if the storytelling was loopy or if the plot developments were organic.

Paradoxically, although Lohar was the most intriguing (at least to me) strip in the comics section, it was rarely or perhaps never signed. The credit on the strip I determined through the Editor & Publisher listing, which cited someone named Tom Brady. I know nothing of this person, and wonder if it was one of the other section contributors working under a pseudonym. However, the art style is different enough that I really don't think so.

Lohar debuted with the new Courier color section on August 19 1950, and outlived the section, eventually becoming a daily-style strip in the Courier. The strip ended on October 18 1958.

Comments:
Hi
The artist name is Bill Brady.
If you want to see more images of Lohar go to this link.
http://museumofuncutfunk.com/2014/02/16/when-we-were-colored-exhibition/

Hi Alan --
Sorry, I see no Lohar images in that post, or any art signed by Brady. How did you determine that the artist on Lohar was named Bill Brady? Do you have any biographical information on this artist? Any idea why the strip was credited to Tom Brady in Editor & Publisher?

I new him when I was a child he (Bill Brady ) was a good friend of my father.In a few weeks a comic section will be added to this sit in it you will see many more Lohar.
Could you e mail me I have a few questions for you?
Thanks Alan Messmann
amessmann@aol.com