Obscurity of the Day: Next Door 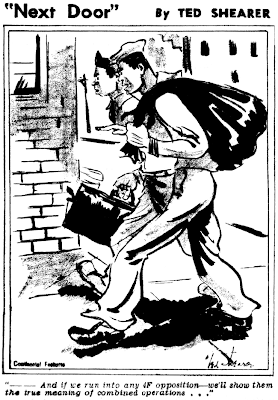 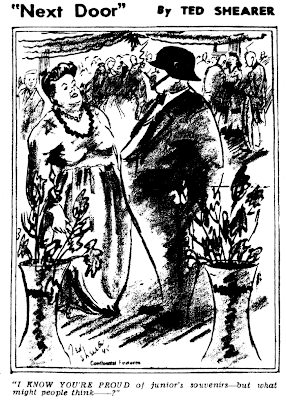 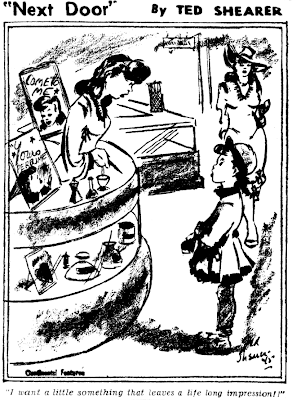 When we left off yesterday, I was saying that the Amsterdam News discontinued Around Harlem in favor of another Ted Shearer panel cartoon series in 1944. That series was Next Door, which actually began life (at least as best I can determine), on August 12 1942 (a date gleaned from the Atlanta World). Next Door and Around Harlem both had the same type of art and gags,and one appeared in papers through Continental Features, while the other appeared in the Amsterdam News. That brings up the question of whether there actually were two features, or if Next Door was simply a renamed Around Harlem. Unfortunately I don't have an answer. I have never pinned down to my satisfaction that Continental Features was definitely the distribution arm of the Amsterdam News, though all evidence points that way. And I have never yet had the luxury of examining two papers that ran the features side by side to see if they match up during the years 1942-44 when they both ran. Feel free to consider that one your homework question folks.

Anyhow, Next Door was a very long-running feature in a field dominated by short-timers. It ran until at least February 22 1953 (date from the Baltimore Afro-American), over a decade, maintaining very high quality art and gags throughout the run. I think near the end Shearer may have self-syndicated the panel, as in the 50s it gains a copyright slug for Paragon Features, a company that has no other credits of which I'm aware.