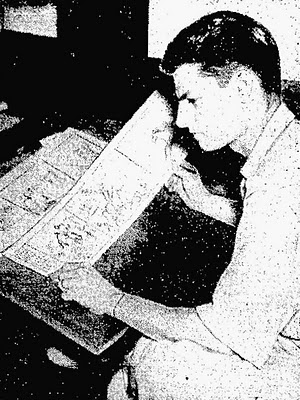 Jack Whiting McGuire was born in Pensacola, Florida on September 13, 1905, according to an January 1, 1946 obituary in the Dallas Morning News (Texas). In the 1910 U.S. Federal Census, he was the second of four children born to John and Blanche. They lived in San Antonio, Texas at 415 Burleson. His father was a machinist at a railroad shop. Some time later his parents divorced according to the next census.
In 1920, the McGuires lived in Pensacola, Florida at 822 East Gadsden Street. His father was a machinist at a shipyard. The Dallas Morning Star said, "He came to San Antonio in 1922, and in 1925 was graduated from old Main Avenue High School. He attended the Academy of Fine Arts in Chicago, University of Texas and St. Mary's University." On May 3, 1925, the San Antonio Express said McGuire was the art editor of the Main Avenue yearbook El Sombrero. The June 27, 1926, Express article, "San Antonio Boys Aspire to Be Great Cartoonists; Talent Shown at Earl[y] Age" said:
McGuire to Attend Academy
Main Avenue High still "points with pride" to Jack McGuire as its leading artistic asset, although he has been out of school for two years past. Since leaving school he has done drawing and lettering for various firms and at present is employed in the art department of an engraving company. He insists that he has had no training at all so far, as, in school, they didn't teach what he wanted to study in the way of drawing. He won a big poster contest in Main Avenue however, with three cartoons. He will go to the Academy of Fine Arts in Chicago in the fall. His home is at 309 Abiso Avenue.


The Morning News said, "In 1927 the artist established his own school of commercial art, first and largest such school in the Southwest. He maintained it until 1942."
The 1930 census recorded McGuire and his wife Loarin (recorded spelling) in San Antonio at 1610 Rosewood. He married when he was 23. His occupation was commercial artist at an engraving company. According to the January 21, 1932 San Antonio Express, he taught life drawing classes at the San Antonio Public Night School. The Morning News said, "…McGuire created [sic: drew] the Jane Arden comic strip in 1932. He drew this strip for approximately six years." The Express reported on July 28, 1935:

The Commercial Art School, under the personal direction of Jack W. McGuire, has enjoyed eight years of continued art classes for the art students of South Texas. It has helped place dozens of students in the advertising art services and engraving plants in San Antonio and other Texas cities….
…Cartooning under Mr. McGuire, who drew the Sunday comic strip "Jane Arden," and now collaborates with John Welch on the cowboy strip, "Bullet Benton" which runs daily in the San Antonio Express, offers every boy or girl who is interested in comic illustration a chance to develop and produce professional work of their own….
...The services of G.L. [George Lee] Reynolds and T.C. [Thomas Connally, his younger brother] McGuire have been added as instructors. Both are well known in their respective fields of commercial advertising.


The San Antonio Light reported, on August 10, 1935, McGuire was "in the East to place a comic strip with one of the national syndicates. He will drop around to renew acquaintances with Norman Rockwell and Russell Patterson before he returns." The McGuire brothers and Lee had an entry in the Catalog of Copyright Entries, Part 4, Works of Art, etc. 1936 New Series, Volume 31, Number 1

Comic Drawn by S.A. Artist
A cartoonist, like a prophet, sometimes is without honor in his own country.
So, at least, finds Jack McGuire, 2424 Broadway, who draws a syndicated comic strip called "Bullet Benton," an adventurous son of the West.

"Bullet" does his stuff daily in but two Texas papers, while he enjoys wide circulation in the New England states and on the West coast, and even is translated into French for Canada and Spanish for Mexico.

Jack has been drawing "Bullet" for about four years now, and has come to the point where he knows the character rather well.

Jack, however, merely draws the strip, for the continuity is written by John Welsh [sic], who lives in Evanston, Ind.

McGuire doesn't even know how many papers actually do carry the strip, for that is all handled through the syndicating firm in Des Monies, Iowa.

But right now Jack has "Bullet" in a big New York rodeo, and he's doing right well, too.

McGuire died in Nix hospital Sunday night after an illness of one month.

Reverend Kermit Gibbons will officiate at the funeral.