Obscurity of the Day: Crazy Quilt 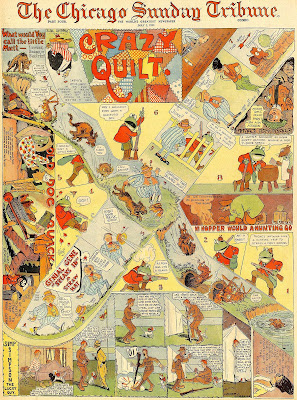 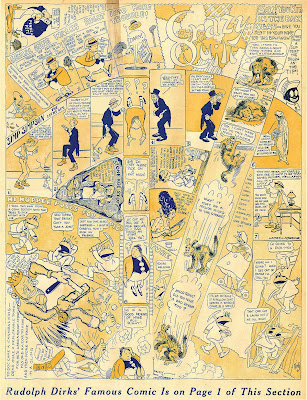 These days it is a nice little readers' treat for newspaper cartoonists to swap strips for a day, or to do a 'jam' strip on special occasions. You'd think that would have been even more common in the old days, when a group of cartoonists often worked right next to each other in a newspaper's bullpen. Not really so, though. It happened, certainly, but rarely.

So that makes it even more special when, in 1914, a group of the Chicago Tribune's cartoonists got together and produced not just a one-off jam page, but an entire Sunday series of them, entitled Crazy Quilt. And when they decided to do jam pages, they really went all out. Each creator contributed a character, some already familiar, some new, and the strips they produced all intersected and interacted with each other. The effect is really impressive, more so if you take the time to really study what's going on in these complex pages. The amount of planning that went into each episode is really impressive, especially since they succeed so well.

Crazy Quilt ran from April 12 to June 7 1914. After the jam page was dropped, many of the series continued on a page which was for one week mastheaded with the Crazy Quilt name, but each strip was separate and not part of a unifying design. Here's a roll call of features that were patches in the Crazy Quilt:

And His Name is Mr. Bones by Everrett Lowry -- ran for a short time before Crazy Quilt, and for many years afterward, ending in 1920. Lowry was at the time of Crazy Quilt running a contest to name the dog, so the strip hasn't yet taken on it's eventual name.

Freddy Frappe Filosophizzes by Dean Cornwell -- new for Crazy Quilt, had a six month run afterward. This was a single panel feature.

Genial Gene by Quin Hall -- ran before and after Crazy Quilt, from January to October 1914.

Hi Hopper by Frank King -- Ran before and after its Crazy Quilt period, from February to December 1914.

Old Doc Quack by Charles Lederer -- a panel that was only used in Crazy Quilt.

Pinhead Pete by Quin Hall -- created for the Crazy Quilt page, it continued afterward, first as a panel feature, and then as a strip, ending in January 1915.

Simp Simpson by Lester J. Ambrose -- started in the Trib's Sunday section in February, it didn't continue after the jam pages.

Stone Age Stuff by Dean Cornwell -- another Cornwell panel, created for the Crazy Quilt page and then ran on its own until January 1915.


Thanks to Cole Johnson for the scans, and to Alex Jay, who will follow this post with a set of Ink-Slinger Profiles of the Crazy Quilt contributors.

Comments:
It looks like modern art influenced this compilation.

Wow these are stunning! What a terrific idea this was! Russ Cochran has reprinted a few of these in his latest project. It's fun to read them in print and be able to twist and turn the page around. Thanks for sharing, Allan and Cole!

Sunday Press Books has just released a collection of all the Crazy Quilts plus other Frank King strips pre Gasoline Alley.