Obscurity of the Day: Our Ancestors 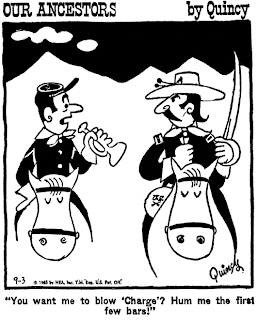 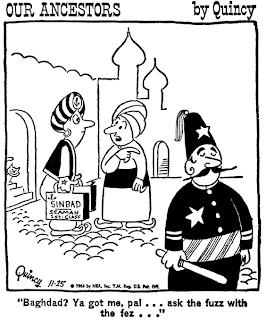 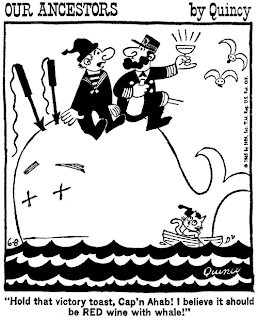 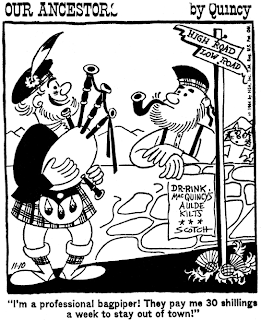 Richard Q. Yardley was best known as the longstanding editorial cartoonist of the Baltimore Morning Sun, but for a short stint he also moonlighted with a daily cartoon panel, Our Ancestors, produced for NEA. The panel was no great shakes as humor, with punchlines that seemed limp from years of use, but the art made the feature worth perusing.

Yardley was in the vanguard of the so-called new wave of editorial cartoonists. Although he started out with a pretty conventional style in the 1930s, he soon tossed out his grease pencil and stipple board and adopted a clean-lined, animated style more closely associated with gag cartoons. His editorial cartoons, though often packed with details and labels, have an openness, an airiness, about them that is amazing to behold. These qualities made his editorial cartoons stand out from the pack. It also, unfortunately, kept Yardley from being taken very seriously by some of his peers. (However, one who 'got it' was Charles Bissell, whose profile of Yardley in the AAEC News will appear tomorrow here on the blog.)

Yardley used his middle name, Quincy, as the credit line on Our Ancestors, indicating that he either didn't feel any great desire to be associated with it, or that his bosses at the Baltimore Sun weren't happy with his moonlighting. My guess is the latter, since Yardley is reported to have been quite a history buff. I'm guessing he probably delighted in coming up with these history-related gags, even if they often play flat, at least to my ear.

Our Ancestors was added to the NEA line-up on March 27 1961 and was cancelled on September 4 1965. The series was revived, presumably in reprints, for their weekly Suburban Features offering from May 12 1975 to 1981.

Comments:
Notice the little cat in Yardley's cartoons, who also appeared on his ed cartoons. Many editorial cartoonists have used a mascot such as this, but few, if any, appear in strips. Any come to mind?

How about a mascot who got his own strip:

Thank so much for posting this Allan. Mr. Yardley's daughter has been a longtime client of ours so I've gotten a peek at his wonderful originals (and some of them are HUGE) and really wanted to learn more about him.