Obscurity of the Day: Gus and Gussie

Paul Fung was generally employed behind the scenes, assisting or subbing for other cartoonists, and brilliantly so, but he does have a few signed credits. Here is the longest-lasting feature with which he was involved, Gus and Gussie. On this delightful strip Fung drew and Jack Lait wrote.

Lait was a Hearst yeoman who at various times was a sports reporter, crime reporter, columnist, syndicate editor, and newspaper general manager -- often wearing several of those hats at the same time. There are claims that in his heyday he had more words published per year than anyone else in the world -- a claim that may well be true, since in addition to his newspaper work he also wrote short stories, plays and novels. In short, this was a guy who torture-tested his typewriters.

Lait probably never spent more than five minutes per day writing Gus and Gussie, but that was enough to make it one of the snappiest strips around. Gus the waiter and Gussie the hat-check girl speak an entertaining Runyonesque patois full of street slang and malapropisms, making every strip an adventure in decoding the duo's jargon.Early on in the strip the focus is on the peppery dialogue and their dealings with the nightclub patrons, but as the series went on the duo branched out into other employment opportunities, and longer, more involved, storylines.

The art by Fung constantly betrays traces of Billy DeBeck and Chic Young, two cartoonists he assisted or subbed for at various times. Whether this is Fung's native style is hard to say as he seemed to be a true chameleon.

Gus and Gussie ran in a modest number of client papers from April 13 1925 to February 24 1930. Fung was called on to replace Chic Young on Dumb Dora at this time, and apparently Lait had no wish to continue the strip with someone else at the art helm. 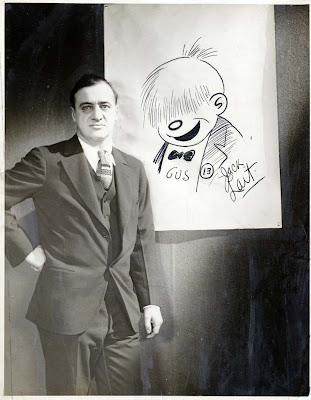 Comments:
Funny you should mention that about BLONDIE...IN some 1970's CHARLTON comic books such as BLONDIE, ROCKY AND BULLWINKLE, and HONG KONG PHOOEY, the art was credited/signed to "Paul Fung Jr." I guess sonny boy followed in Daddy's footsteps somewhat!

Paul Fung Jr. assisted on Blondie in the forties and fifties and took over the strip offically in the sixties. He was a remarkable artist who deserves a post on his own.