Obscurity of the Day: Taken from Life 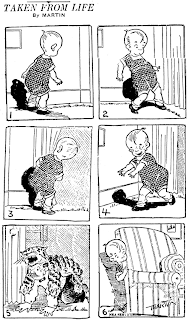 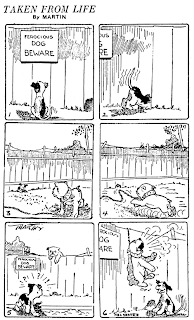 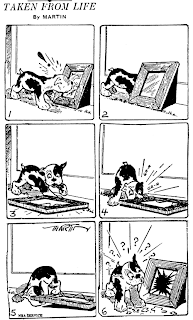 Edgar Martin was still trying to find his niche at NEA as the syndicate published his third feature, Taken from Life. After the self-limiting Fables of 1921, and the good but short-lived Efficiency Ed, Martin tried his hand at pantomime. As any cartoonist who has tried will tell you, doing a daily pantomime feature is one of the hardest tasks a cartoonist can undertake. Trying to tell a story without words, and make it funny to boot, is no mean feat, and doing it six times per week puts your creativity to a Herculean test. For the young and inexperienced Martin, it was a bridge too far.

The typical Taken from Life strip didn't work well as a story, or failed to be humorous, or both. It's almost painful to look at the strips, because as we know from his later work, Martin was a good cartoonist, just not ready or suited for this strip.

Sadly, Taken from Life did not have an abbreviated lifespan like Martin's other early misfires. It began on July 24 1922 and ended February 16 1924, almost two years of uninspired awkwardness. Thankfully it was replaced by Martin's great success, Boots and her Buddies, with which he thrived for decades.

Comments:
"Taken from Life" is generally so unfunny that it almost works as a meta-comic. Its "awkwardness" was recognized by at least one editor (at The (Danville, VA) Bee, which ran it with the following header: "TAKEN FROM LIFE" has not come up to the necessary requirements of The Bee and will be discontinued as soon as a desirable comic can be secured. (10/27/1922)