Obscurity of the Day: School Days 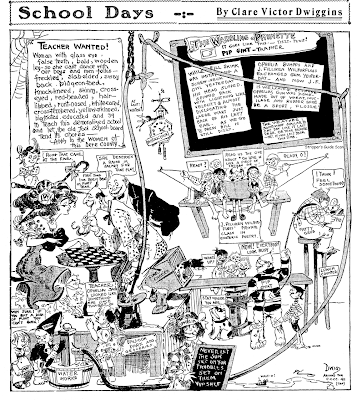 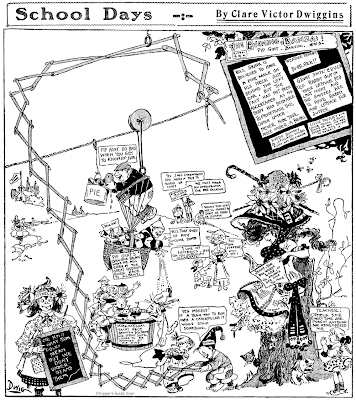 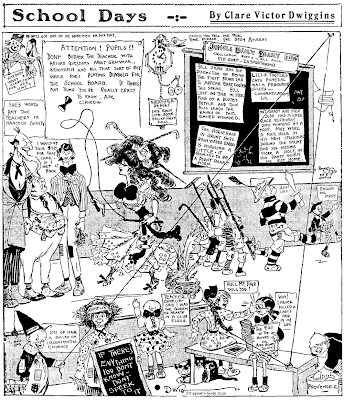 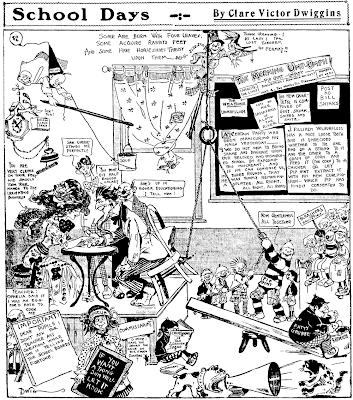 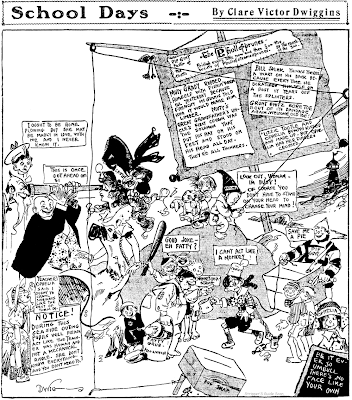 It pains me to call Dwig's School Days an obscurity. But I'm probably right that not one out of ten thousand people have a clue what it is. And who can blame them. After all, the series is a century old. The characters, some of whom had a good measure of fame in their day, were all off the popular radar by the 1930s. And this particular series, the specific one I'm covering today, barely lasted six months, though Dwig would constantly return to it under a number of guises and titles for the next couple of decades.

School Days, a weekday panel series that only ran from April 3 to September 18 1909 in the New York Evening World, represents an enormous burst of creativity from Clare Victor Dwiggins, putting in place a cast of characters and motifs he'd return to over and over. We have the overall motif of boisterous country school kids, the Ophelia character and her equally famous slate, Pip Gint the mischievous prankster, and other cast members who'd be used over and over. In addition, Dwig threw in the interesting motif of rope and pulley pranking (perhaps inspiring Rube Goldberg?), another idea he'd revisit in other series.

This hugely funny series rewards readers who are willing to pause far longer than usual on their cartoon fare. If what they say is true, that the average cartoon or comic strip today has all of 5 seconds to make its point, the School Days panels are so far beyond the pale that they can hardly be considered the same species. If you spend less than a couple minutes perusing each of the cartoons above, I can practically guarantee you've missed something.

Comments:
if it only ran in 1909, is its appearance in the 1922 Alexandria Gazette a reprint?

"...this particular series, the specific one I'm covering today, barely lasted six months, though Dwig would constantly return to it under a number of guises and titles for the next couple of decades...