Obscurity of the Day: Horace the Hero 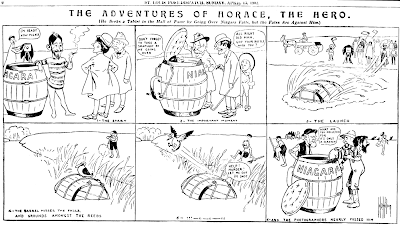 W.O. Wilson worked in newspaper comics for at least seven years (1902-08), worked for three major syndicated papers (New York Herald, New York World and Philadelphia North American), had a Sunday feature that appeared regularly for five years (Wish Twins and Aladdin's Lamp), and has found a new generation today who appreciates him for one of his excellent series, Madge the Magician's Daughter (it actually has an iPhone app!).

Yet, bizarrely, there seems to be no one who knows anything about the guy! I looked through every reference book that seemed likely to yield a crumb or two about him, and I came up dry -- not even a first name! So consider this obscurity of the day more rightly a plea for information -- are you able to contribute? Will our ace people finder Alex Jay work some magic? We'll see...

Today's obscurity is Wilson's first known series, and it was a cute effort, but short-lived. Horace the Hero ran only from April 13 to May 4 1902 in the New York World. It features a fellow who fancies himself a daredevil, and who, predictably enough, has his stunts backfire.

Quiz: only three American newspaper comics that I know of featured a character named Horace in the title; this one, another 1900s obscurity called Hallucinations of Horace, and one more that ran for three decades -- can you name it? And no fair Googling...

Martin's BABE 'N' Horace, topper of BOOTS AND HER BUDDIES.

Dotty's hubby was Horace, but he wasn't in the title, so honorable mention to ShadZ!

I know it doesn't count, but outside of the U.S., the obvious title is A MAN CALLED HORACE by Kettle & Christine for the London Daily Mirror syndicate.