Obscurity of the Day: The Duke of Manhattan 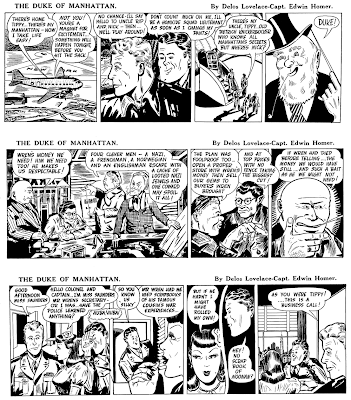 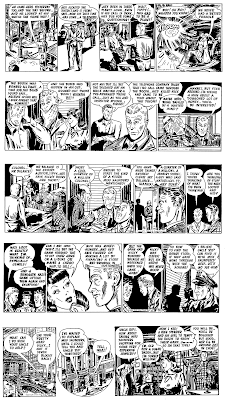 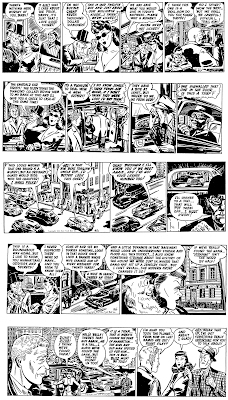 Awhile ago I was contacted by Nick Homer, the son of a creator listed in my E&P Mystery Strips. His dad's strip was called The Duke of Manhattan, and it was listed with McClure Syndicate in 1946. Nick said he knew nothing about any McClure connection, but rather that it was created for the New York Sun and syndicated by them to about thirty papers. I'd never heard of the Sun syndicating comics, and I found it a bit farfetched. The Sun was so very conservative; okay, downright stodgy; I couldn't see them doing something as frivolous as producing and marketing a strip.

However, Nick proceeded to tell me that his father had kept some of the material. He showed me photos of some promos which proved that the Sun really was trying to syndicate the strip. This was amazing to me! Imagine the National Review syndicating a strip -- this wouldn't be all that different.

I noticed in all the material he showed me that everything was strictly promotional -- there was nothing there that proved the strip ever actually ran in the Sun or anywhere else. I told the fellow that I smelled a failed attempt to sell a strip here. Why would dad have kept all this promo material but not one single tearsheet of the actual strip running in a paper? It seemed very unlikely. Also, frankly, the strip would have been a hard sell -- the story in the samples was quite badly written. The writer, Delos Lovelace, despite having some major writing credits, didn't have a clue about the rhythm of telling a story in the short daily spurts necessary. Artist Edwin Homer had kind of an interesting Chester Gould-ish style going, but the offbeat look of the strip definitely would take some time to get used to.

I checked with my expert on New York City papers, Jeffrey Lindenblatt, to see if he'd seen it, and he had no recollection of it. At that point I felt that all the facts were lining up and pointing in the same direction. I told Nick that it seemed to me extremely unlikely that the strip had ever run, and enumerated my reasons for thinking so. I volunteered to check the microfilm of the New York Sun the next time I was at the Library of Congress, but that I frankly didn't hold out much hope.

He took my opinion with good humor, but said that he just happened to be going to Washington soon, and that he would check the microfilm himself as long as he was there.

Well, since this post is an Obscurity of the Day, and not a Mystery Strip, you can guess the result. We don't know why artist Edwin Homer hadn't kept any tearsheets of the strip, but the fact is that it ran in the New York Sun (and maybe even elsewhere). The strip ran in the Sun from May 15 to November 11 1946. As far as we know, there was never a McClure Syndicate connection, and it could well be that E&P simply messed up the entry.

The moral of this story, I think, is that sometimes the only people who believe in you are your family, and sometimes they believe in you despite seemingly overwhelming reason not to -- but that doesn't by definition make them wrong. Your family knows you better than anyone in the world, and that's just one of the many reasons they are so important.

Comments:
The late 40s was an interesting time for New York papers. The Sun, around this time, had Rube Goldberg for their editorial cartoonist, and was working very hard to stay alive (the effort failed; a few years later it would merge with the World-Telegram). Over at PM/the Star, they had Walt Kelly doing double duty as an editorial cartoonist and comic strip producer (Pogo had an early run, there), and this was after "Dr. Seuss" had done cartoons for them in the early 40s. I think "Barnaby" was also in the middle of its run on one of the minor papers around this time. Can't say those lads didn't try to do something different to stay alive.

Who doesn't love a villian who has a swastika tattood to the side of his head? He is smart enough to cover it up when he goes out, though.

I would like to see posts like this under a different label, something like Additions to the Book. This would make it easier for me to look newly discovered/newly released strips that have surfaced since the book was published.
D.D.Degg

Eric -- Barnaby was in PM in NYC. Good point about the Sun taking on Rube Goldberg; guess they were indeed trying for some half-baked makeover as you say. Unfortunately Rube's editorial cartoons were, with occasional exceptions, pretty run of the mill -- if they wanted him for his zany humor, they were disappointed.

DD -- so you want me to systematize and categorize my shortcomings, eh?

Well, when you put it that way...yeah.
Nobody expects The Book to be complete, and if they did you let them know that "although [The Book] seeks to be complete, it cannot be...there is still much ground to be covered-many newspapers remain unsearched,"
Far from shortcomings, these are new discoveries that are a part of completing and fulfilling your mission.
When you find stuff like 'The Duke of Manhattan' or Marc Lutz's 'Can Hed Comix', that ran in the Manteca edition of the Stockton Record in 1994-95, I see that as part of an ongoing success on your part.
I guess you will release supplements eventually, but those will probably come way too few far between for most of us.
Right now I'm trying to decide if I should carefully print 'The Duke of Manhattan' information on the appropriate page in the very small margins.
I hope you'll rethink the label idea.
D.D.Degg

The promo says "in New York about New Yoprk: which makes it sound like it was meant to be a one paper strip. Maybe they thought about syndication and/or even made some inquires to McClure but then for whatever reason it turned into a short run wonder at (maybe?) one paper.