Obscurity of the Day: Speaking of Ancestors 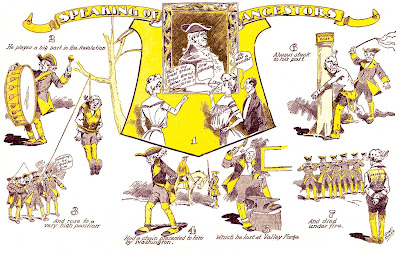 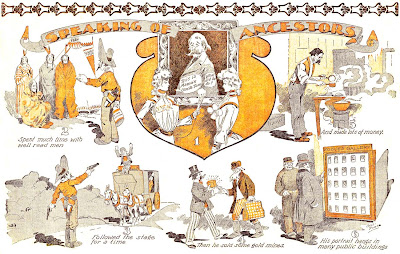 Ah, for the days when a cartoonist could milk their idea and then move on to greener pastures. Here we have Charles Reese, journeyman cartoonist and newspaper illustrator, contributing Speaking of Ancestors to the Philadelphia North American for a grand total of two episodes. Yep, you're seeing the whole series here.

It's a very cute idea, that of trying to put a good face on the exploits of a black sheep forefather, and Reese executes it brilliantly. The wordplay is absolutely delightful, and the vignette style strips are ably and humorously drawn. The juxtaposition between the captions and the cartoons is just delicious. But Reese realized that there was really nowhere to go with the idea and dumped it after a few iterations. Could he have done ten or twenty or even a hundred of these? Sure, but they would have just been formulaic, and an absolute slog for the creator. And what sort of wall-eyed dullard of a reader would have found any pleasure in reading slight variations on the same jokes over and over? I just can't imagine.

Speaking of Ancestors ran on February 21st and 28th 1904 in the North American, and our samples, or rather our run, of the strip is courtesy of Cole Johnson. Thanks Cole!