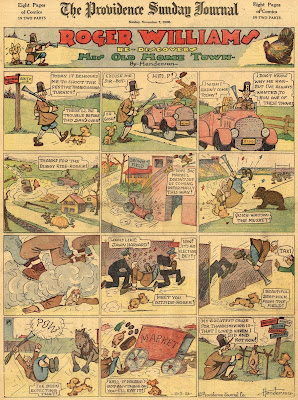 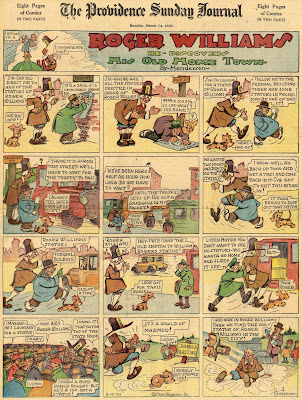 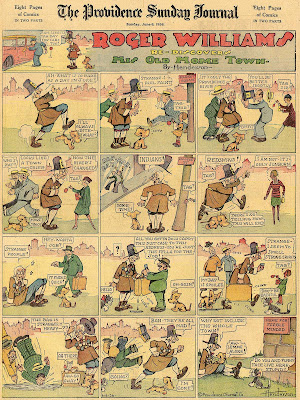 When we cover a locally produced feature about area history, it's usually a ticket to Snoozeville. But not today! Here we have Rogers Williams Re-Discovers His Old Home Town, a rollicking romp around Providence, Rhode Island, hosted by a time-displaced version of the city's beloved founding father. Although a few of the gags can be hard to fathom for this 80-some year removed non-Rhode Islander (what's up with the tag-sellers in the third strip?), it is a delightful slapstick strip that I imagine was a great delight to readers of the Sunday Providence Journal.

The creator of the strip is J.C. "Hen" Henderson, who apparently ended up working for this paper by 1926. Earlier features by him that we've covered are Today's Hook-Up, And He Did, and Noodle the Poodle. I wonder now if Henderson was at this paper all along, and his Associated Newspaper work emanated from here. Ah, yes, the research never ends.

I did not know of this strip's existence until Cole Johnson sent me these samples, and have no definite start or end date to offer -- Cole has samples as early as March 14 and as late as November 7 1926.

Comments:
The tag sellers are doing charity solicitations, sort of like Poppy Day for vetrans; you get a tag to show you've donated. You would then apply said tag to your coat to show how charitable you've been, abd also to ward off other taggers not to waste their time on this one, he's already been took.

This is a very nice find. And BTW the guy in the March 14th strip is figuring his income tax which was due March 15th in those days.