Obscurity of the Day: The Dinkelspiels 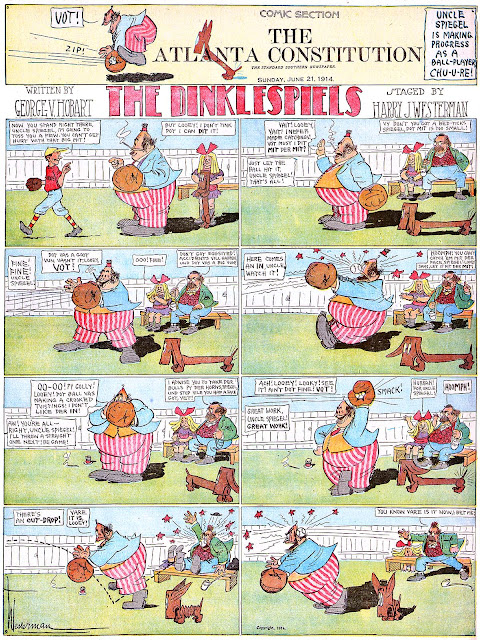 For reasons that I find mystifying, at the turn of the last century some of the most popular prose humor was written in dialect. There were 'humorists' who specialized in just about every dialect flavor imaginable. But I'll be darned if I find any of it funny, and not because of any holier-than-thou dislike of national or cultural stereotyping. No, it's the work I have to do reading it to make any sense of the darn stuff. By the time I go to all the trouble of translating the lingo into something understandable I am certainly in no mood to laugh. Heck, I'm exhausted!

George V. Hobart was a humorist whose highest achievement in dialect humor was a family of German immigrants named the Dinkelspiels. He came up with them for the Cumberland Sunday Scimitar in 1893, and they were popular enough to get him into Baltimore, and then New York City, newspapers with short stories relating their conversations written in German-flavored pidgin English. If you have a constitution that can enjoy such stuff, you can read two books of Hobart's Dinkelspiels online, Dinkelspiel's Letters to Looey and D. Dinkelspiel; His Gonversationings.Hobart's Dinkelspiels also apparently did well on vaudeville stages well into the 1910s.

The last hurrah for The Dinkelspiels seems to have been this comic strip. The faltering McClure Syndicate contracted Hobart to write the series, probably hoping that the addition of some well-known characters to their pre-print sections might put it back on the radar for newspapers. They would later do the same with another series which (sort of) starred Charlie Chaplin, that time taking the unlicensed route to save money.

The addition of The Dinkelspiels to the preprint section didn't help McClure, of course, as preprint seemed to no longer be nearly the economical boon it once was. Apparently by the mid-teens newspapers could take their pick of features from multiple syndicates and get their customized funnies sections printed for about the same cost.

Though The Dinkelspiels was full of Hobart's signature slanguage, which I could certainly do without, it did sport some delightful art. First up was Harry J. Westerman, whose usual cartooning work, mostly done for the Ohio State Journal,  would have never have led me to expect this wonderful highly stylized stuff.

The Westerman art ran from the strip's inception, on February 1, to July 26 1914. Then one of McClure's best artists, Ed Carey, took over until the strip ended on April 11 1915.