Obscurity of the Day: Love Affairs of the Office Boy 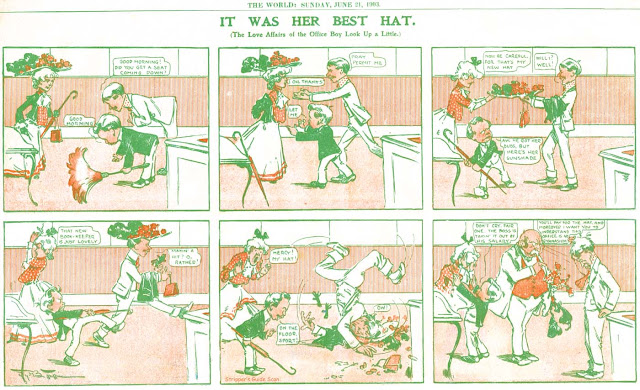 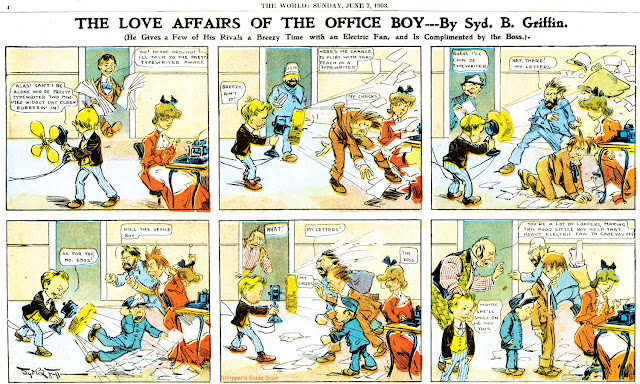 I imagine all young boys had crushes on older women when we were kids. I recall that at six years old, not yet knowing much about the vagaries of genetics, I thought a teenage cousin of mine was the bee's knees, and if she could just overlook the vast chasm of a decade in our ages, that we were surely each other's soulmates.

In Love Affairs of the Office Boy, Syd B. Griffin works that angle, chronicling the misadventures of a young kid who is madly in love with the winsome office secretary. Of course every other young man in the office, most of whom are of more eligible age, are warm for her form, too, so he has to stoop to some pretty rotten behavior in the losing battle to win her affections.

Griffin's art on this feature, much like his other newspaper strips such as Little Umjiji and Four Comical Coons, is nowhere near the quality of his work for the major humor magazines. I assume he either considered the work beneath him, or dashed it off rather quickly so that he could spend much more time on his magazine cartoons.

Love Affairs of the Office Boy ran in the New York World's Funny Side Sunday comics section from May 31 to August 16 1903.