Obscurity of the Day: Did'ja Hear? 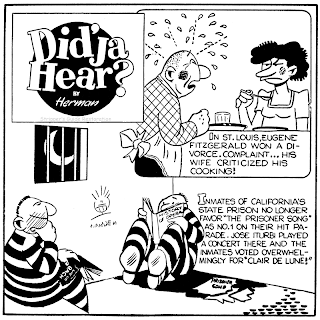 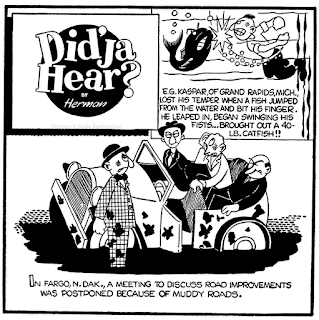 Most of the features distributed by the Western Newspaper Union syndicate are fair game as obscurities, but the various panel cartoons they offered in the late 1940s even more so. Most of the weekly papers that took the WNU service ran the page's worth of strips they offered, but few ran many of the panels, and those who did use them seldom did so consistently.

That's why I don't think I'm doing all that bad to say that today's obscurity, Did'ja Hear?, ran from sometime in 1948 to sometime in 1950. Trying to pin the date down any better than that would require that I find that needle in a haystack, a newspaper that ran all the WNU material every week. Sigh. A boy can dream, can't he?

Did'ja Hear? is yet another in that seemingly endless list of Believe It or Not clones, and it sure didn't bring anything original to the form in terms of content. What it did have is some pretty darn nice stylized art; much different, and for my money much more eye-catching, than the realistic style used in Believe It or Not, Strange as it Seems and others. Unfortunately, I don't really know who did the art. The panel was bylined 'Herman'. But which Herman? I dunno.