Obscurity of the Day: Gasoline Gus 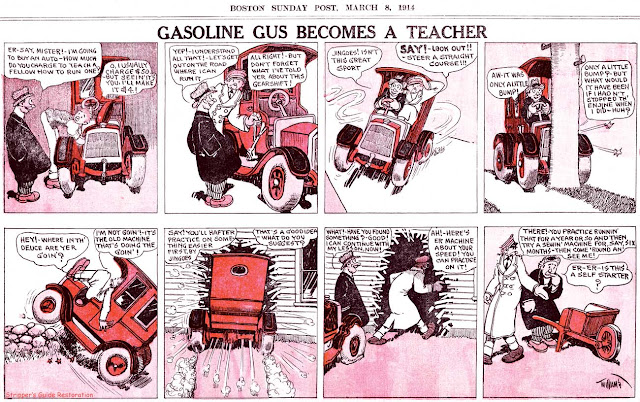 The problem with some folks is that their names are too doggone common. Here's Gasoline Gus by 'Williams'. But which Williams?

Gasoline Gus, a delightful strip about a car fanatic, was syndicated by the Philadelphia North American from January 26 1913 to July 4 1915 (on that date the North American Syndicate was shut down). In an age when motor vehicles were still somewhat the province of the well-to-do and the hobbyist, Gasoline Gus was a slice of life that may be even more interesting today from a historical perspective than it was in its original run.

The strip was revived in reprints, when World Color Printing reused the strip in its Sunday sections of 1919-21. That four year layoff was enough to make Gasoline Gus already look somewhat anachronistic, as automobiles and the people who drove them had, in just that short span,  gone through big changes.

Anyway, back to the Williams question. This is the only North American strip done by a Williams, so no help there. In fact we have no Williamses particularly associated with Philly in this era, so no help there either.

Looking at the signature and the style, though, there is a little resemblance with Orville P. Williams (the big swoosh, though is at the end of the signature rather than the beginning). Besides, he is a guy normally associated with Boston in this era. However, looking at his credits (you know where to check, right?) I see that his workload at the Boston Post seemed to be reduced in 1913. And although the 'Gasoline Gus Williams' was doing work for the North American, I note that the Boston Post was a client of North American material at the time. Hmm ... things are fitting together nicely. Yup, I'm going with it -- this is the work of Orville P. Wiliams.

Comments:
Interesting. Comedian Billy Murray recorded an Edison cylinder in 1915 called "Gasoline Gus and his Jitney Bus." Wonder if this inspired or was inspired by the strip. Of course it could have been coincidence.