Obscurity of the Day: Jasper Jones in the Movies 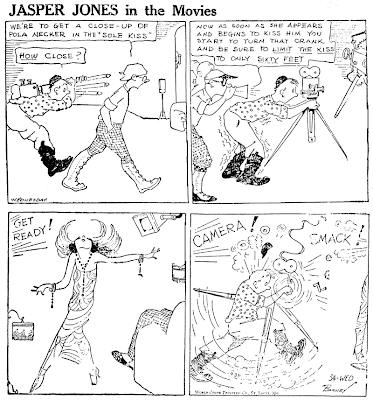 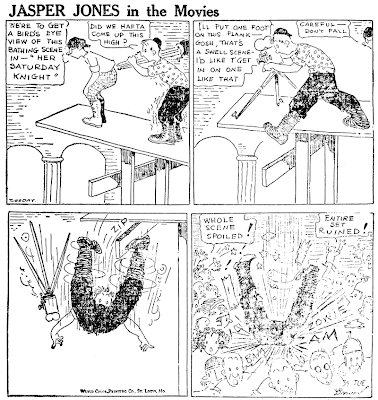 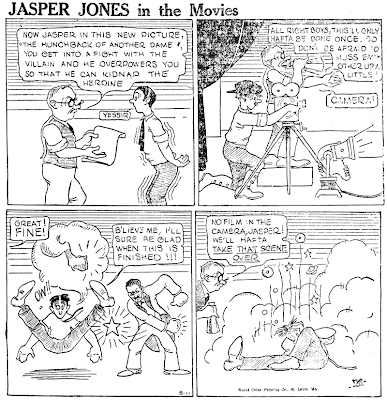 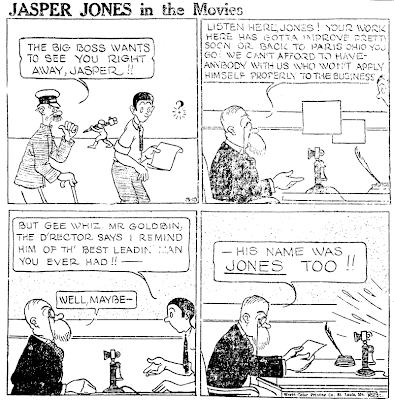 In the 1920s, World Color Printing was having a heck of a time holding onto clients for their pre-print Sunday comics section. The section itself was rather pathetic, filled mostly with reprinted material, and the economics of pre-print sections were less attractive than back in the 1900s.

Looking for other products with which to tempt newspapers, World Color came up with the idea of weekly pages of amusements for kids. The pages would have stories, games, puzzles and comics. The idea actually went over rather well, both with daily newspapers who would use it in their Saturday or Sunday issues, and weekly papers, which saw it as sort of a one-stop shop for a feature page. World Color had at least two versions -- one heavy on comics, another heavy on stories and activities.

I can't vouch for the other features on the weekly pages, but the comic strips were all reprints, some so old that they must have looked quite ridiculously out of date to readers. One exception to the rule, though, was Jasper Jones in the Movies. Not that it was new material, mind you. No, there almost seemed to be a rule against that. But it was quite a bit newer than most of the fare, like Luke McGlook strips from 1915.

You may wonder why I'm approaching Jasper Jones from the wrong end, so to speak. Why discuss the reprint run? Well, it's because I have never seen the strip in its original run. What I can tell you is that when World Color Printing began running the strip in 1924, the first episodes were titled Adam Zapple in the Movies, and they were oddly-shaped affairs, usually two quite large panels in a 3- or 4-column arrangement. Examining these strips minutely, I am able to pick out a syndicate stamp on a few that seems to say something like "Morton Studios" or "Norton Studios", and the copyrights of these strips are in 1922 and 1923. Therefore they apparently ran somewhere as much as two years earlier through a different syndicate, one I've never heard of.

Even later, after the name of the strip changed, there are telltale signs that they come from an earlier run, one that was most likely daily. You can see in some of the samples above the lettered-in day of the week, and even dates (or maybe they are codes) on some. The syndicate stamp is for World Color Printing now, but that could have easily been added later.

Oh, one other detail. Who created this classic of western literature? The earliest strips are signed by G. Barney. Later on the G. is dropped, and a new creator, 'Herb', pops up. For the bulk of the run, strips signed by Barney and Herb appear at random. No matter which signature appears, the art is Lockwood Correspondence School drop-out quality.

The strip ran on the weekly World Color Printing page from 1924 to at least 1933, and if you wonder why the printing quality of the samples is so awful, believe me, I looked through a big stack of those World Color pages looking for these ones, in which the printing is even somewhat legible. World Color Printing must have been shipping out really low quality plates to these papers, because you very rarely see one of these pages that isn't a type lice lovenest.

If anyone knows anything about the original pre-World Color Print run of this strip, I'd very much like to hear from you ... and it looks like Alex Jay seems to have something up his sleeve for us tomorrow in that vein. I can't wait!