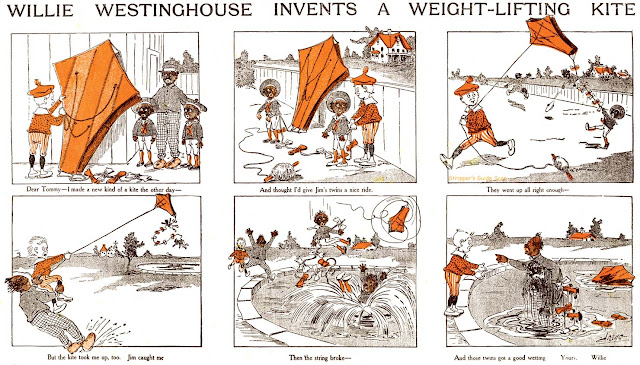 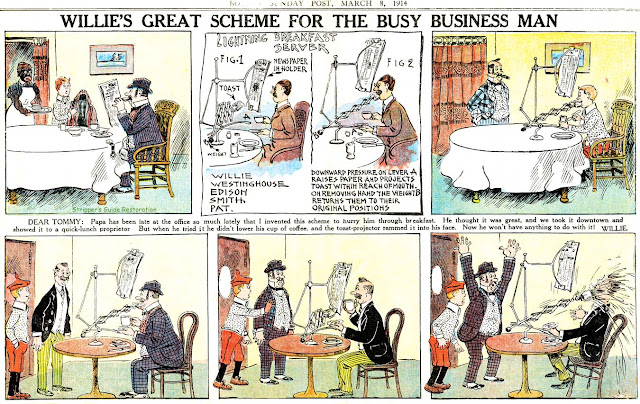 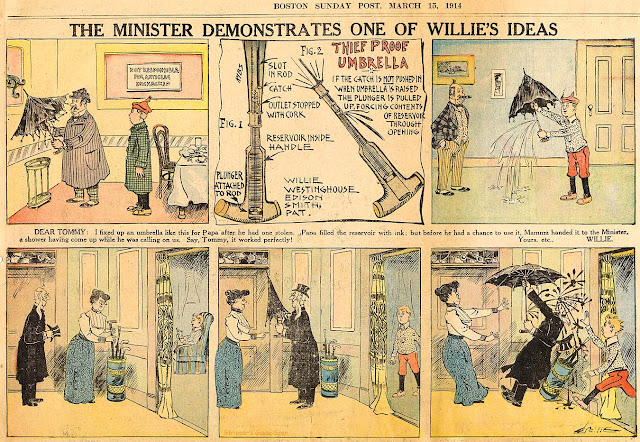 An obscurity it may be today, but a hundred and ten years ago, this strip, Willie Westinghouse Edison Smith, was a popular and long-running favorite. In an era when strips that lasted less than a year were the norm, only the hardiest specimens survived. Willie Westinghouse (as the strip title was often abbreviated) had an edge that made it easier to survive, but nevertheless, it lasted because it deserved to.

Frank Crane (whose scratchy signature is often mis-read as Drane, and who is a different fellow than the famous newspaper columnist of the same era) created the kid inventor with the pedigreed name for the New York Herald, where he debuted May 27 1900. In the typical strip, Willie would recognize a problem, invent some wondrous device to address it, and then have the invention backfire, generally through no fault in the design. This last bit was important, as it made the strip a favorite among engineers of all stripes -- end-users can manage to misuse anything, no matter how elegantly designed. Think of it as a Victorian version of Dilbert.

Crane used the conceit that Willie was writing a letter to his pal Tommy in the strip. This allowed him to minimize word balloons and include a blueprint for the invention, as if it was an insert to the letter. I don't know what the relationship was between the two kids, or if Tommy ever actually appeared in the series, but he sure did get a lot of letters.

Crane left the New York Herald in 1902 and the last Willie Westinghouse strip to appear there was on July 20. Crane took the strip to the Philadelphia North American, where he eventually became the feature editor. His strip first appeared in the North American on November 2 1902, and ran consistently until August 25 1907. This was an impressive run in itself, but the apparent end of the strip was only Crane taking a lay-off. The strip returned on November 1 1908, and ran for six more years, ending on November 29 1914.

Although this was the end of new material, World Color Printing purchased the back-stock of the strip and used it in their pre-print Sunday sections from July 4 1915 until sometime in 1918.

Despite running for so many years, the strip was collected in book form only once -- "Willie Westinghouse Edison Smith, Boy Inventor", published by Frederick Stokes in 1906.