Obscurity of the Day: Medicare 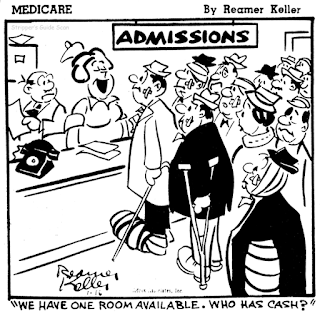 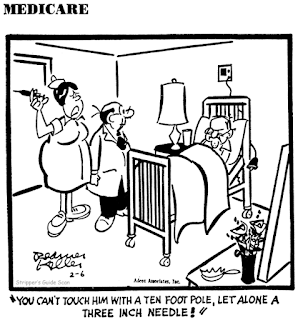 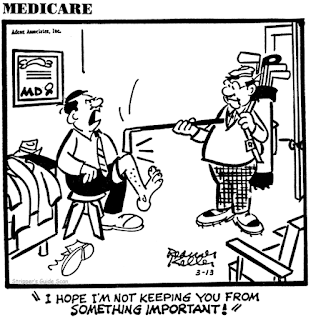 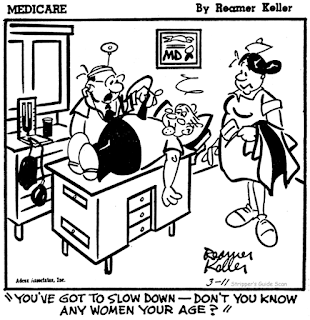 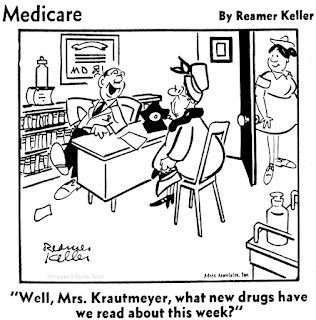 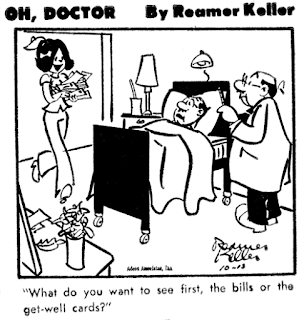 By the time Reamer Keller introduced his new feature Medicare on January 3 1966, he was one of the grand old men in the magazine gag market, and a veteran of several successful newspaper syndicated features. As Keller himself readily admitted, his success was due just as much to the vast quantity of work he produced as to the quality thereof. And his output was incredible -- as you have read here in an article about him posted two days ago, Keller claimed (and I tend to think he wasn't stretching the truth much) to be able to produce fifty cartoons per week.With Keller pumping out cartoons at that rate, throwing an extra daily newspaper feature into the mix wasn't that big a deal for him.

Medicare was created specifically to ride the wave of interest in medical matters that had been spawned by the newly created federal health insurance for the elderly and indigent. Keller and his syndicate, Adcox Associates, reasoned that with medical care in the spotlight, and medical gags pretty easy to come by, Keller might do well, and the amount of work involved was, by his standards, negligible. And he did do well, if not spectacularly. The feature certainly never broke any sales records, but as a pleasant space-filler, with the added sales hook of a well-known magazine cartoonist at the helm, it did just fine.

For an unknown reason, some papers ran the feature under the title of Oh, Doctor. Perhaps they were uncomfortable with using the name of a federal government program for a cartoon. When the feature moved from Adcox to Field Enterprises in September 1974 some papers changed the title to Say Ah!, although the official title seems not to have changed then. However, in 1976, the feature did officially change names to Doctor Dumphy. That seemed to be the last gasp, and the panel series seems to have ended on November 13 of that year.