Obscurity of the Day: Billy Possum 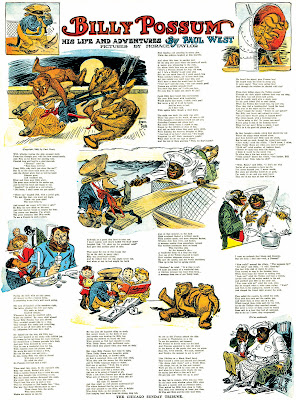 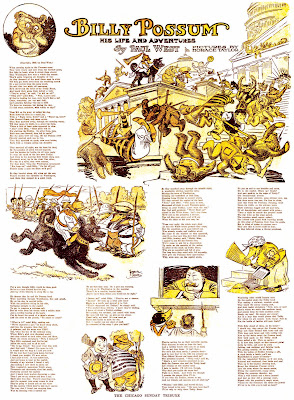 Although the Billy Possum series is awfully heavy on typeset text, I figure that the interesting subject matter and background story, and the two cartoonist creators, tip the scales far enough to make it Stripper's Guide material.

If it weren't for Cole Johnson and Alfredo Castelli, though, I wouldn't even know about it. In the microfilm of the Chicago Tribune that I indexed, this series was missing entirely. Obviously some villain with a razor had gotten to the bound volumes before the microfilmers. Luckily, though, the researcher community comes to the rescue once more.

From Castelli's Here We Are Again I learn that the series ran from May 9 to July 11 1909. The dates are significant, because this is no unassuming little funny animal series. No, the creators, Paul West and Horace Taylor, were doing a little bit of backhanded politicking in this series, not to mention putting in a bid to create a new national toy craze.

We all know about the Teddy Bear and the cuddly toy's relationship to President Theodore Roosevelt. However, what is less well-known is that Roosevelt's successor, William Howard Taft, was marketed to the public with his own furry, cuddly toy equivalent, the Billy Possum.

There is conflicting information about how and exactly when Taft was first associated with a possum. One story has it that the possum was picked because of Taft's penchant for falling asleep at innopportune times -- the possum being known as a good snoozer. Another story is that during the Presidential campaign Taft was served cooked possum at some southern function, and was so loud in his praise for the cooked critters that the connection stuck.

In reality, my bet is that Billy Possum began its life more prosaically, purely as a marketing gimmick cooked up by back-room political operatives. Taft did not have the magnetic personality of Roosevelt, and his backers needed to try everything they could pull out of their bag of tricks to make the public like him.

Pulled along on the coattails of Roosevelt's popularity, Taft was elected to office. Many of the votes cast for him were really for Roosevelt, who had let it be known with a wink and a nod that Taft was his man, would do his bidding, and it would almost be like having Roosevelt himself in the White House for four more years.

Although popular with the common folk, Democrat and Republican alike, the Republican establishment was far less enamored of Roosevelt, and when it turned out after the election that Taft and the rest of the party had no intention of being Teddy's puppet, traditional Republicans were relieved.  The Chicago Tribune was stolidly Republican, and undoubtedly was a less than enthusiastic supporter of the Roosevelt administration. When Taft was elected, the Tribune editors and ownership must have heaved a sigh of relief.

The rift between Roosevelt and Taft is where the Billy Possum series originates. After the election, Teddy was surprised and definitely not dee-lighted to find that Taft had somehow grown a backbone. Roosevelt's ideas were falling on deaf ears in the White House, and he was not pleased. While the Taft-Roosevelt rift may not have risen to the level of open battle, it was a simmering feud that lasted throughout Taft's presidency.

Seeing a chance to appeal to Republican papers, Paul West concocted a story wherein the virtuous, sunny and talented Billy Possum, through no fault of his own, becomes embroiled in a feud with all the Teddy Bears. The Teddies are unhappy that Billy Possum could become the next favorite doll, unseating them from their place at the pinnacle of toy success, where the love of all the children showers upon them. The Teddy bears are quite monstrously evil characters, and thus, through any underhanded nasty method they can come up with, they plot to kill poor Billy Possum.

Of course in the end Billy Possum is going to win the battle, and in the second sample above, gets a personal endorsement from none other than Taft himself, who admonishes the possum to "fight to a finish" with the teddy bears.

West and Taylor's Billy Possum may have been intriguing political satire, but it failed in its real mission, to ignite the interest of the nation's children and create a toy craze. The pages were far too wordy, and the action too violent. Although Billy Possum dolls were test-marketed, and other various doodads produced, nothing came of it. The series and the concept sank from sight with hardly a trace ... even on the microfilm.

Comments:
Billy Possum was concocted after the 1908 campaign, when in January, 1909 requesting, and wholeheartedly enjoying a plate of Possum at a dinner given by the Atlanta chamber of Commerce. This inspired some Atlantians to form the Georgia Billy Possum company, by Andrew and Susan Algood, and Mr and Mrs.Jack Minor of that city. They dreamt up the character (with some inspiration, according to a news article, from an Atlanta Constitution editorial cartoon by staff man Gregg)expressly for licencing, and applied for a patent on 17 January. Things moved fast and soon, along with a whirlwind of promotion, Toys were on sale in New York department stores before the month was up.The dolls debuted, for instance, in Loeser's in Brooklyn.(A picture looks like they've taken the basic Teddy Bear body and modified the head and tail). They also offered BP belts and handbags. Soon there would be BP hats, cake, jewelrey and a song. By February 26, The firm was suing it's manufacturer, the Columbia Toy Company, as they were infringing on the patent by selling their own unlicenced versions. Apparently "Billy Possum" might have originally been a generic term, like "polly Parrot" because Joel Chandler Harris and Thornton Burgess used the name for possums in their animal stories. But in the end, despite many predictions of the demise of the Teddy Bear and the new permanant place in the toy world of Billy, he fizzled very quickly.

That should say that it was President-elect Taft that enjoyed the Possum dinner in Atlanta.

There's also an article in the May 9 Chicago Tribune that points to this new comic, as well as the recent additions of Danny Dreamer, Old Opie Dillock, and the addition of boys and girls pages in the paper, as being done in part as a reaction to the anti-comics crusaders of the time, trying to give "uplift" the comics with more sophisticated language, illustration, etc.