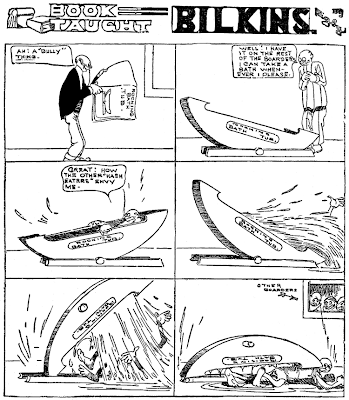 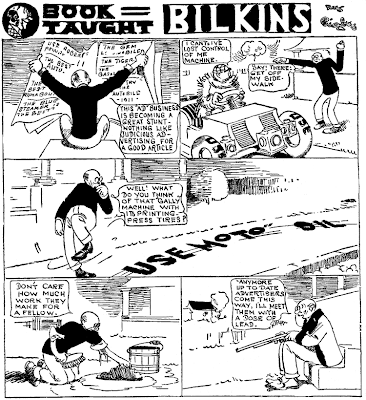 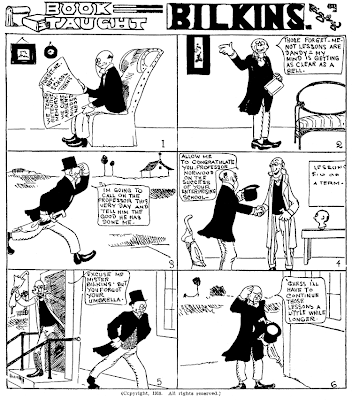 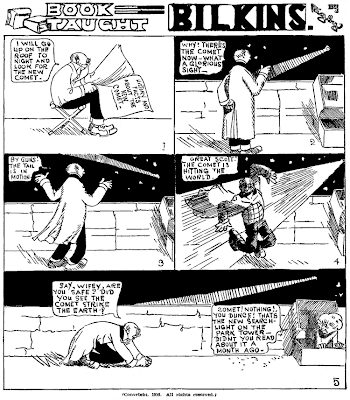 Clarence Rigby never created what we would now consider a classic series, and as a cartoonist he probably registered a tad closer to inept than ept, but you have to give the guy a lot of points for having gotten his work run by a lot of different newspapers and for coming up with a lot of different series, some of which had very long runs.

Here's his longest running series, Book-Taught Bilkins. Chances are you've never heard of it despite the fact that it ran for six years, practically an eternity compared to the mayfly-long lifespans typical of weekday strips in that day. Rigby's weekday strip was the very first continuing series run by the New York Evening Telegram, the surprisingly lively evening paper run by the generally staid New York Herald. The Telegram ran all sorts of oddball strips in the oughts and early teens, some penned by the Herald's major names like Winsor McCay, others by cartoonists who rarely if ever measured up to getting a series in the Herald's Sunday section.

Book-Taught Bilkins debuted on August 22 1904, and for a short while actually flirted with becoming a daily strip. It ran daily from August 27 to September 8, but then faltered, well short of earning a place in histories as an early daily. Presumably because Rigby had so many oars in the water, Book-Taught Bilkins tended to disappear for long stretches -- the two longest were August 10 1905 to March 12 1906 and August 17 to December 28 1906. By May 1907, though, Rigby seems to have settled down, or perhaps the Telegram finally decided to order new material on a consistent basis, and Book-Taught Bilkins ran on a consistent once-a-week basis until the end of the strip on September 13 1910.

The strip itself has a pretty familiar plot for that era. In those days when you could 'send away for our free booklet' to learn how to do everything from car repair to cartooning, much gleeful fun was made of those who did a little 'book-learning' and came away with the idea that they had actually mastered a subject. Mr. Bilkins believes everything he reads, considers himself a self-taught expert in 101 subjects, and suffers the consequences over and over and over.

Digression Dept.: the car tires with ads on them in sample #2 are not at all far-fetched -- I recall an antique car show I once attended that had a 1910s-era model whose tire treads spelled out the name of the manufacturer. I thought it was a brilliant bit of marketing, and wondered why the idea faded away. I searched all over the web and couldn't find a show-and-tell picture though. Sorry!

Digression Dept, Next Door Down: the bottom sample from 1910 is referencing Halley's Comet, which was making its transit in that year.

Comments:
Hello, Allan----Perhaps what you saw at the antique car show were Firestone's "NON-SKID" brand tires. These were introduced in 1908, and have been produced since then for the ever-shrinking early automobile market. The tread consists of large raised letters spelling "NON-SKID" over and over again.

That's probably it. Great marketing gimmick. I suppose, though, that the marketing might have gotten in the way of niggling little details like traction, though.

The last panel in the second cartoon is a bit psycho.
Btw there really was a dad of rocking bath tubs at time. You can google it for adds for them. One was called the Niagara and another the nautilus.
Absolutely nuts.