Obscurity of the Day: One-Round Teddy 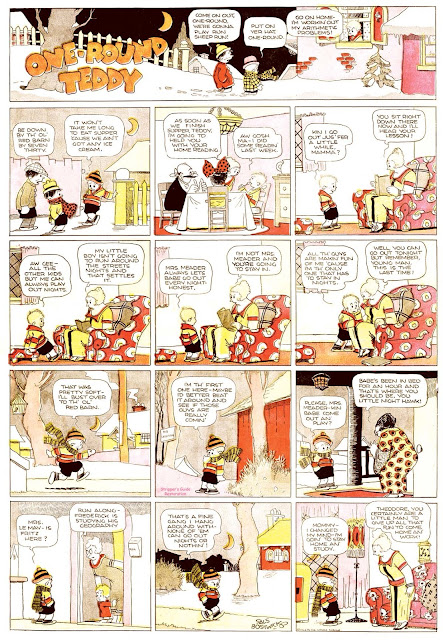 Sals Bostwick seemed destined for greatness. Although not a single one of his series comes anywhere near qualifying for major accolades, Bostwick was off and running as a cartoonist so young, and with such a natural style and verve, that major success seemed to be just a matter of time. As you'll see in Alex Jay's Ink-Slinger Profile tomorrow, however, Bostwick's destiny turned out not to become the famous creator of a long-running series. What a pity.

One-Round Teddy, our focus today, is a pretty run-of-the-mill kid gang effort that was produced to satisfy the seemingly unquenchable needs of the expanded Chicago Tribune Sunday comics section. Although Bostwick was only just entering his 20s, the art style seems that of an old hand -- which he already was when the feature debuted on May 25 1924. Any critic who says that Bostwick got a leg up because of his prior job assisting Frank King on Gasoline Alley is silenced pretty quickly on the strength of the art, if not so much the gags. The Tribune, too, seemed impressed. Never a paper to run a lot of dailies, they showed the measure of their regard for Bostwick by granting him a rarely offered spot in the daily paper with One-Round Teddy, starting August 5.

Whether One-Round Teddy would have eventually earned Bostwick the price of fame is unknowable, because it didn't end up getting much of a chance. The daily strip ended after just one month, on September 6, and the Sunday last appeared January 4 1925.

Perhaps Bostwick couldn't handle the workload -- he may still have been assisting King during this period -- or perhaps the pay was too low. We do know that it wasn't long before he moved over to Hearst's Chicago American, so maybe Bostwick knew he had better in him, and felt he could command a better deal.