Obscurity of the Day: Loco Luke 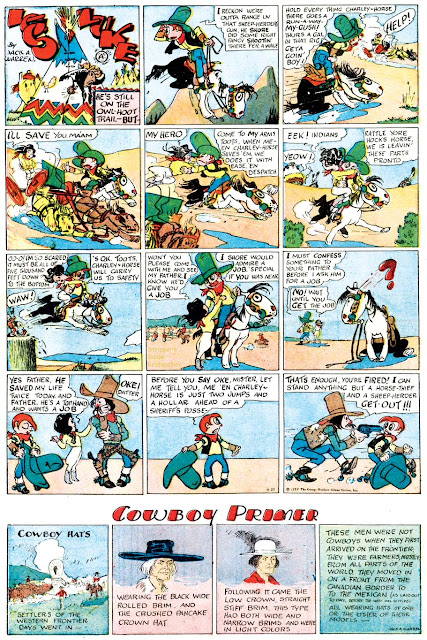 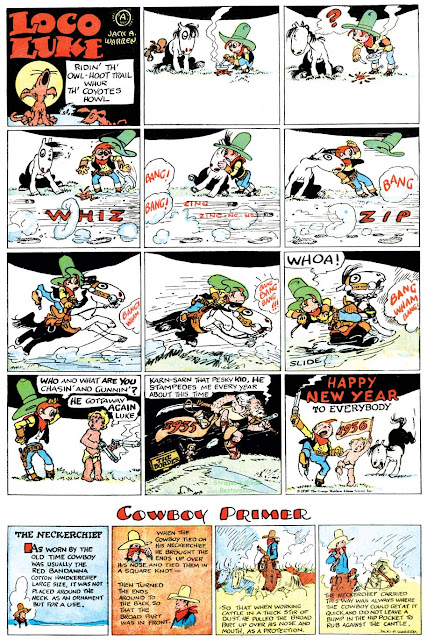 When George Matthew Adams decided in 1935 that he could make money selling a pre-printed tabloid color comics section to small papers, all of his much-vaunted salesmanship and positive thinking didn't help him one bit to make a success out of this stinker of an idea.

I don't know whether Adams, who was running a small but successful syndicate, had some angle that he thought would put the idea over, but the fact was that in the middle of the Great Depression, small papers were just as poor, if not poorer, than their unemployed and underemployed readership. But even if a small paper editor had the desire and finances to get in on this color comics section scheme, the minute he saw it he'd probably bust out laughing -- and not because the comics were so funny.

Although the art in these comic strips was generally professional, most of the writing is almost too bad to be believed. The editor of this section seemed to be entirely without a clue. Although today's obscurity, Loco Luke, was one of the brighter lights in the section, the top sample is a good case in point of a gag that just never seemed to happen. Where was the editor to ask Jack Warren what rock the gag was hidden under?

Loco Luke, as you can see, is a slapstick, zany cowboy strip. The venue makes sense because,  according to a short bio by his grand-son submitted to Lambiek, apparently Jack Warren was quite a fan of all things western. That really shows in the Cowboy Primer topper, which has some interesting tidbits to share about cowboy lore and legend.

The bio also states that Loco Luke is a child, but I think that's just a misreading of Jack Warren's character design on the strip. I believe Warren was just going for a rubbery, loose, animated feel to the characters, and the result makes the characters look a bit like kids, I suppose.

Loco Luke ran in the George Matthew Adams color Sunday section from July 5 1935 to April 4 1936, the entire (known) life of the ill-fated experiment. When the section ended, only two features hadn't entirely worn out their welcome at the syndicate. Al Carreno's Ted Strong was eventually reprised as a daily strip, while Jack Warren's Loco Luke was revamped into Pecos Bill, and a writer was added to prop up the quality of the gags. Unfortunately, even with the addition of a gag-man, Pecos Bill came and went in a hurry, but that's a discussion for another Obscurity of the Day post.

Jack Warren then made the shift into comic books where he produced a great quantity of material, including a lot of work for Novelty Press. His humor strips were a real leavening to the otherwise deadly serious (and often quite dull) doings of Dick Cole, Edison Bell, and The Cadet.

Comments:
Love the art, so I hope you'll be able to show Peos Bill soon.

I have many of my grandfather (Jack Warren's) Pecos Bill strips

Great post on grand daddy - Pappy Warren. My mom Betty Warren died on Nov 8, 1993 (correction). The Pecos Bill strip, which according to Lowell Thomas, was co-created by Tex O'Reiley and Jack Warren.

I'm sure Loco Luke inspired the world famous Lucky Luke (by Belgian artist Morris, a.k.a. Maurice de Bévère). Not only the name Loco/Lucky... I never read any comic historician from both sides (American/Eurepean) explaning this relation betwenn two Western parodians