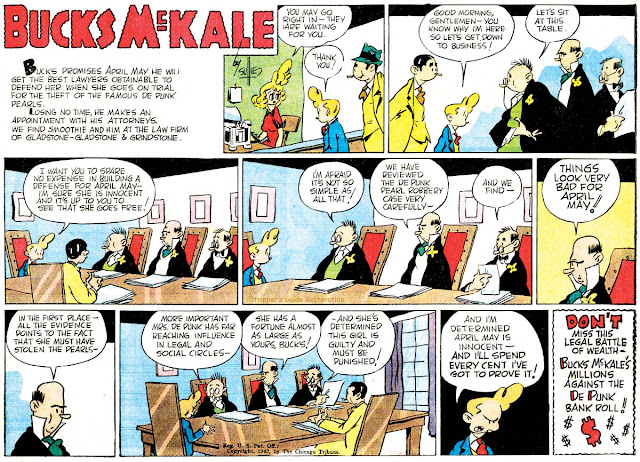 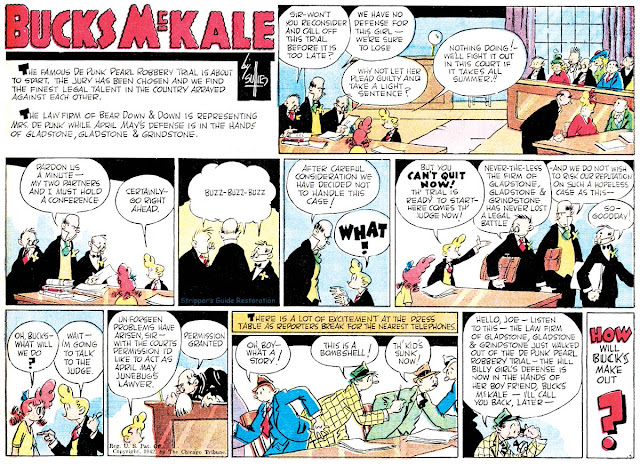 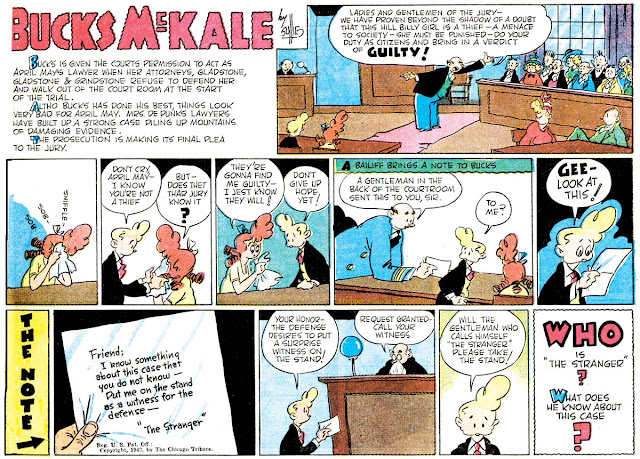 Bucks McKale was one of the earliest new features adopted by the Chicago Tribune Comic Book, starting on June 30 1940. It managed to outlast the Comic Book section itself, if only by a single week, ending on April 11 1943.

Bucks McKale is a story about a fabulously rich kid. How he gained his money I don't recall, not having seen the first installments since I reviewed the material on microfilm about twenty-five years ago. However, what I can say is that despite the superficial resemblance, the feature was nothing like Richie Rich. Bucks McKale's money was rarely an important plot point, except that it sometimes gave him a convenient springboard to adventure with his buddy/mentor/manager, Smoothie. Bucks liked to fly off to exotic locales in his own planes, star in Hollywood movies that he financed, and the like. But once the money got him started on an adventure, there was rarely anything more said about it.

Bucks gained himself a sweetheart on one of his cross-country flights when he and Smoothie crash-landed in a hillbilly area. April May, one of the local yokels, fell instantly and deeply in love with him, and accompanied him on adventures from that point on.She also got to appear with him on the cover of the comic book on Sundays when he got that featured spot.

Signing the strip was someone named Sullie. I was long ago told by researcher Paul Leiffer that this was Vin Sullivan, famously primarily for having been the comic book editor responsible for Action Comics, the birthplace of Superman.

In my book I mentioned this possible ID without much comment. However, I have now looked into the matter some more. I re-read an interview with Sullivan in Alter Ego #27, and looked at the samples of his art there and on various websites. The artwork seems to be an excellent match, no doubt about that. My only problem with the ID lies in that interview. While Sullivan did leave DC Comics in 1940, right around the time Bucks McKale began, it sounds like Sullivan went pretty quickly into other comic book-related endeavors. He also states, in response to the question of whether he considers himself a cartoonist, "I haven't tried to sell comic strips of my own stuff, not as a success, really. So, yes, I think you could call me a cartoonist, because I've done some cartoons for the newspapers and also for the magazines themselves."

That doesn't sound to me like the response of a guy who had a Sunday comic strip running in the Chicago Tribune for three years. Self-effacing, perhaps? Anyway, he's so vague that the comment certainly doesn't shut the door. Unfortunately, the portion of the interview in which he discusses his career immediately after leaving DC, and which might have answered the question definitely, apparently happened during a tape recorder malfunction.

It wasn't actually Sullivan's words or art that ended up clinching it. It was the fact that as research went on with the other contributors to the Comic Book, I kept encountering cartoonists who would later be associated with Magazine Enterprises, the comic book company run by Sullivan. It seemed too great a coincidence that so many ME hands were in the Comic Book, and that a guy who went by Sullie, and drew like Vin Sullivan, was there too.

** EDIT: D.D. Degg has pointed out that Editor & Publisher, which for some reason I never checked while researching this strip, lists the creator as one E.B. Sullivan.  This E.B. Sullivan fellow even has two other credits (albeit on strips so obscure they have not yet been found actually running anywhere). So the Vin Sullivan story is now all of a sudden looking a little less likely. Yes, Vin has a convenient gap in his work history (which D.D. Degg now seems to be able to fill -- see below), and yes, his style is compatible with that used on Bucks McKale, but the last thing we want to do is blithely steal a credit from another cartoonist just because the peg happens to fit well in the slot. Does anyone know of a cartoonist by the name of E.B. Sullivan who might have lived in the Chicago area?

** EDIT2: Alex Jay has found a cartoonist named E.B. Sullivan, and a profile is now on the blog. Is this our man? There is no primary source that definitely ties him to Bucks McKale, or the other two features, but he seems to be in the right place at the right time.


I was looking for info on a strip called Bucks McKale and found your entries really helpful.
I think that what I have can help you settle, once and for all, the mystery of the cartoonist.
My wife was digging through boxes of her deceased parents' belongings and ran across an original piece of art that was made for her dad, probably at the request of her grandfather.
In the 1940s, her father (Kent Godwin) was a young boy in Chicago. His father (Gaylord Godwin) worked for United Press in Chicago.
In this piece of artwork, the character, Bucks McKale says, "Your dad (Gaylord) and my boss (the creator of the cartoon, no doubt) were school mates at Ole Mizzou." Bucks is wearing a sweater with a big gold M on it.
E.B. Sullivan, according to the bio you posted, attended the University of Missouri in the mid-20s, as did Gaylord.
I would think that would settle the question that the strip's creator was E.B. and not Vin Sullivan.
By the way, the bottom of the artwork is personalized with "Best wishes to Kent Godwin from Bucks McKale and Sullies."

Comments:
Really neat-looking stuff. I'd love to see more of this.

Dave Strickler,in his L. A. Times comic strip index, lists the creator as E. B. (Sullie) Sullivan.
http://www.comicsaccess.com/TitlesAlpha.php?Grp=B
Serendipitously your "G" listing of Mystery Strips has a Gargoyle And Gadget by E.B. Sullivan as a daily strip from 1936-45.
Also you say that E&P lists the National Newspaper Syndicate as distributor of Gargoyle and Gadget.. If I'm not mistaken that would place it in Chicago.
That would put E. B. Sullivan in the same place and time as Bucks McKale.
Who is this mysterious E. B. Sullivan?

Well, DD, that's a helluva good question. Don't know why it never occurred to me to check this credit in E&P.

I don't have a clue who Mr. E.B. Sullivan is, but with him having another credit (albeit a mystery one) I definitely need to rethink this being Vin Sullivan. Very weird, though, that Vin's drawing style is similar, and there's a convenient timeframe of apparent inactivity in his life.

During those 1940-43 years Vin Sullivan may have been doing the Sunday Bucks McKale strip for the Chicago Tribune.
But he definitely was partnered with the McNaught Syndicate setting up and editing their comic book division:
http://en.wikipedia.org/wiki/Columbia_Comics
(Okay, it's Wikipedia, but google Columbia Comics Corporation for more.)
D.D.Degg

Hi DD --
Ah, I see; interesting that we come up with a newspaper syndicate connection -- but to a different syndicate! So, with perfectly circular logic, we can say that it is because of his association with McNaught that he went by the pseudonym 'Sullie' on Bucks McKale. Yippee!

Seriously though, Alex Jay has jumped into action and he has a profile of E.B. Sullivan coming up today. No definite connection established, but he was a cartoonist and spent time in Chicago. Have we found our man?

Found a Bucks McKale comic published on April 25, 1943 in the Boston Post Comic Book Section. I guess the end date of this strip is still in question?

Cliff -- The Chicago Tribune comic book ended April 4 1943. Perhaps due to contract, the Boston Post apparently continued it awhile, resulting in differing end dates on many features in that venue. Unfortunately, as I've mentioned in another reply, I did not find these when I reviewed the Boston Post on microfilm. Either I missed them, or they weren't included on the film. What is your last Boston Post Comic Book Magazine section?

I just purchased a copy of Comic Book Magazine (Los Angeles Times, December 15, 1940) featuring our pal Bucks McKale at a flea market for $1. I found your article very informative. Do you happen to know a value for said comic?

My $1 also yielded a selection of vintage newspaper comic sections from 1937 to 1962. Included in the 1937 issue is a very well preserved Mickey Mouse strip art/story by one Walt Disney.

While researching the Straight Arrow promotion I talked with Sullivan a few times. My research on Fred L. Meagher (pronounced Marr)led me to Vesta West and the Tribune's Comic Book Magazine. Here I found Bucks McKale by Sullies leading me to think that it was the work of Vin Sullivan, however, when I asked him he told it was not his work.

Hi, I have just purchased two comics from an auction that appear to be original art, created during WW2. They are signed Sullie in the same way the signature is on the Bucks McKale comic strip. On the bottom, in pencil is the narration for the comic and at the top, on the left, in pencil it says "Private Stuff" and on the right, in pencil it say by Sullie. I have read the debate above and wondered if my findings would help to solve the mystery. I would love to show you the comics however I am not seeing a way to post them here. Thank you!

I've just looked at the Bucks McKale strips posted here. The signature, Sullie, is the way Estill signed some of the Christmas postcards he sent to my mother, his cousin. They grew up together in Palmyra, MO.

Your material on my mother's cousin Estill B Sullivan "Sullie" had an unusable effect. A lady saw my sister Peg's post and contacted us and offered us some comics and other things that E B Sullivan had done. Some were framed copies of "Private Stuff" done while E B was in the air force. It has been wonderful to find out more on him and he was beyond a doubt the creator of "Bucks McKale"

Yes . He was kin to my grandmother Doris White. HER married name was Boettcher. She spoke of him fondly and received many postcards of his artwork

Yes . He was kin to my grandmother Doris White. HER married name was Boettcher. She spoke of him fondly and received many postcards of his artwork