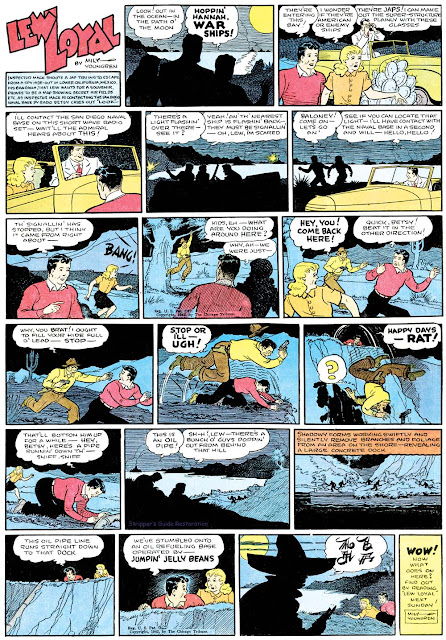 If breathless adventure is your cup of tea, and you're willing to deal with short rations of logic and coherence, Lew Loyal is right up your alley. This Chicago Tribune Comic Book series, which debuted on October 13 1940, must have been considered a big draw. While other strips got one or two half-tab size pages, Lew Loyal received a munificent four pages per issue.

Creator Milt Youngren gave the Trib a lot for their money, too. Those four page adventures read like an over-excited kid trying to tell a story. The events pour out at breakneck speed, and in the process cause and effect become jumbled and important plot points are missed and muddled.

Another apt comparison that can be made is with the typical lesser grade comic book stories of this period. And, of course, that's basically what the Chicago Tribune wanted in their Comic Book section. They must have been tickled pink when Youngren's submissions got the thumbs up as being "just like comic books" from the editors' kids.

Although there is precious little expository material in the strip, I surmise that Lew Loyal (the fellow in the red sweater) is a youngish teen. He and his Uncle Mack, who seems to be some sort of government agent, are constantly stumbling onto nefarious criminal plots to kick-start their adventures, and then when the war begins, Axis saboteurs pop out from every dark doorway and abandoned warehouse. Lew's friend Becky tags along on most of his adventures. The kids are often ducking hails of bullets, while fighting back with their wits alone, usually doing more to bring the villains to justice than their uncle.

Lew Loyal got a demotion in 1942, down to two half-tab pages per issue. The strip outlived the Comic Book section, which ended in April 1943, but didn't last long in the Tribune's regular comic section. Lew Loyal went into retirement as of the October 31 1943 episode.