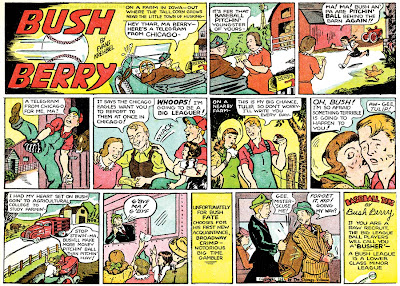 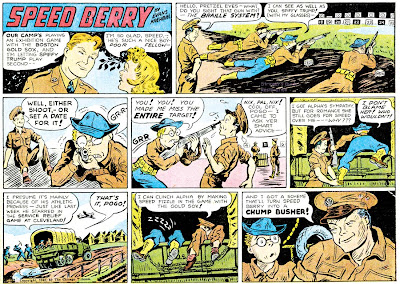 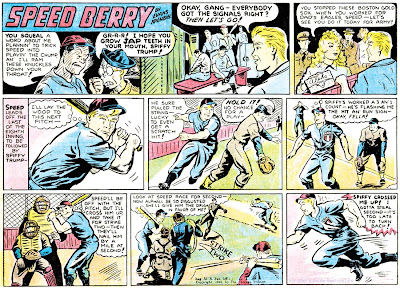 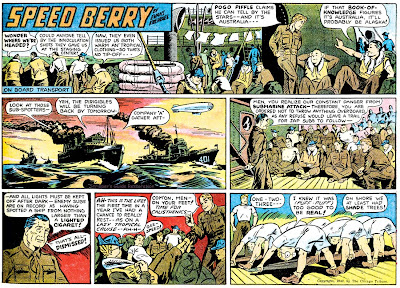 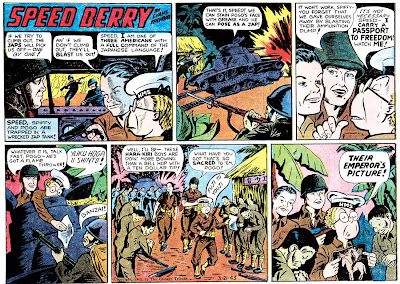 World War II caused most Americans to put aside their pre-war hopes and dreams, and concentrate instead on pulling together in pursuit of victory. The same was true for many comic strip characters, including today's Obscurity, Speed Berry.

The Sunday-only comic strip began in the Chicago Tribune Comic Book section on April 27 1941, then titled Bush Berry. The strip was intended to be about baseball. As is typical of baseball strips, we began with a farm boy who has a rocket for an arm. Called up by a major league team, he seems to be on the road to fame and fortune as the star hurler of the Chicago Eagles. Naturally there are some unforeseen bumps in the road, but 'Bush' Berry has everything going for him.

However, creator Evans Krehbiel apparently saw the writing on the wall in mid-1941, and he had Bush Berry enlist in the Army, where his nickname received a promotion, on October 12 1941, to Speed Berry.  At first Speed's life doesn't change all that drastically. His chums and enemies from the Chicago Eagles all seem to have enlisted with him, and his job in the Army is -- what else -- to play baseball.

Then Pearl Harbor happened, and the tone of the strip quickly changed. Soon Speed and his entourage were on their way across the Pacific, baseball all but forgotten. The strip now became a red-blooded war strip, with Speed and his buddies seemingly single-handedly winning the war. So fine a job did Speed do in the Army that he was mustered out early. The strip was cancelled on August 29 1943, about four months after it was graduated from the Comic Book section, which was cancelled, to the regular Tribune Sunday comics section.

Evans Krehbiel, son of respected artist Dulah Evans Krehbiel, either had a quickly evolving style, or he got a lot of help on this strip. The art varies from cartoony to sketchy to finely delineated over its short three year life. Krehbiel got at least one more syndicated comic strip job, the 1944-45 Wilbur Wackey. Lambiek cites two additional features, Bitsy and Becky's Senior, neither of which I have ever seen. Bitsy is only known to exist as a set of originals, none of which have copyright dates or syndicate slugs. Becky's Senior was advertised by American International Syndicate, which claimed a whole slew of features that no one's ever seen actually running in a newspaper.

Comments:
how come your scans are always so clearplicy must and bright?