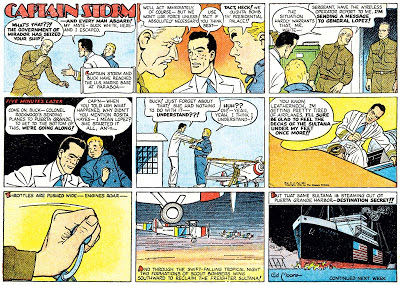 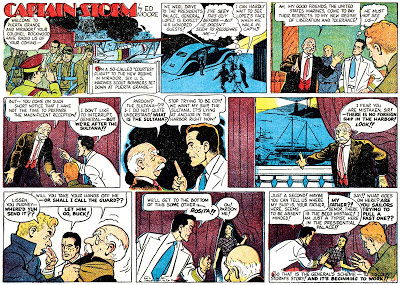 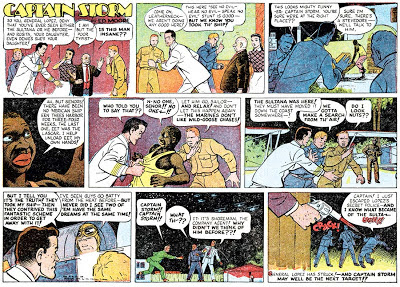 Among the better features of the Chicago Tribune Comic Book was Captain Storm. In a line-up designed to appeal to comic-book crazy kids, and to compete with The Spirit pull-out section available from the Chicago Sun, there was a lot of second-rate stuff  in the 'comic book', but Captain Storm was a cut above. The strip barely got off the ground, though, running just five months from November 13 1940 to March 2 1941

The strip was nominally about the skipper of a freighter ship, but the heroic Captain Storm seemed to spend more time everywhere else, because the first story arc has him losing his ship to thieves.The writing, the art and the plot are all top-notch work and I don't doubt that they were reader favorites.

The strip is by Ed Moore, whose work resembles another Chicago-trained cartoonist, Dick Moores, enough that I get the two confused. Ed Moore did some assisting work on Dan Dunn and Don Winslow prior to creating Captain Storm, the only newspaper strip on which he got credit. However, Moore was also working at the same time in comic books. Perhaps he found that to be more lucrative or less demanding than Captain Storm, and that explains its short run. Moore worked in comic books and assisted on newspaper strips into the 1960s, then switched to advertising work, according to Ron Goulart in The Great Comic Book Artists, Volume 2.