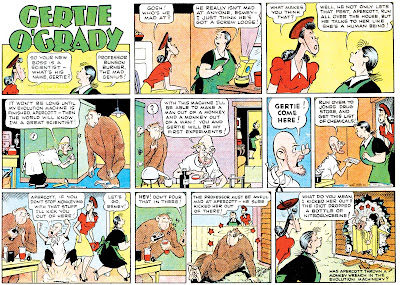 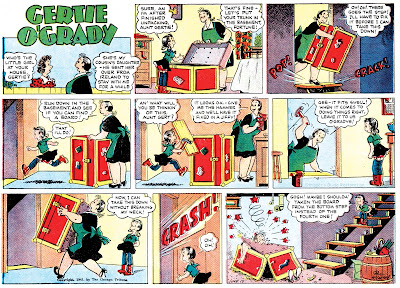 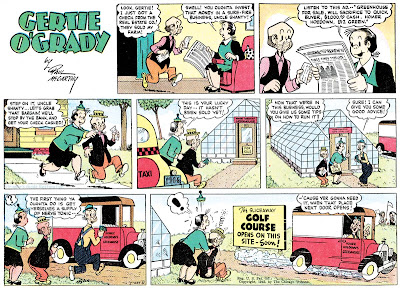 One of the longest running features in the Chicago Tribune Comic Book insert of 1940-43 was Gertie O'Grady. The strip debuted on June 30 1940, shortly after the comic book itself, and managed to outlive the comic book section by a short while, ending November 14 1943.

Gertie O'Grady concerns a middle-aged Irish woman, whose role in life is never really spelled out in any great detail. She seemed to be a maid in early episodes, then a boardinghouse proprietor, but through most of the series she had no clear career. Her comedic foils started off on the zany end, with a mad professor and a giant ape, but later switched to a poor Irish immigrant girl named Fortune, and then she finally hooked up permanently with Uncle Shanty, an Irishman of the old school. The Irish humor in the strip was stereotypical, of course, but 180 degrees away from the coarse, racist Irish humor you would have seen in strips thirty years earlier. In Gertie O'Grady, the Irish are treated as loveable in their picturesque, idiosyncratic ways.

Cartoonist Paul McCarthy was at the helm of the Sunday-only strip. I know little about him other than that apparently he later went on to be one of the artists behind the extremely successful Sad Sack line of comic books.

EDIT 12/31/2017: Just found a half-tab example of Gertie O'Grady dated 3/20/1949 -- six years after the end of the original series. Although there's no overt clue on the tearsheet,  my guess is that this is from the New York Sunday News, and they commissioned this as one of their filler strips. It is apparently new material, because Gertie has slimmed down and prettied up considerably, while Uncle Shanty has become more decrepit looking. Has anyone seen any other later examples?