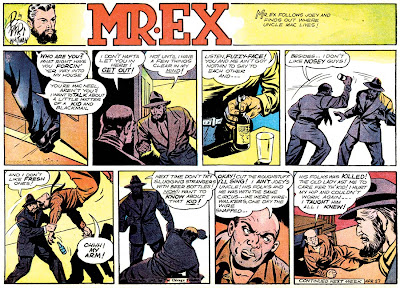 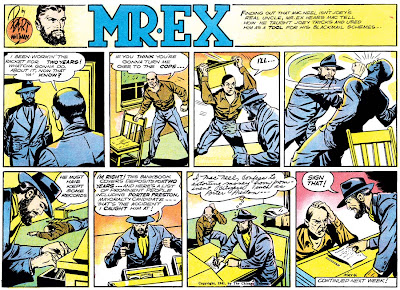 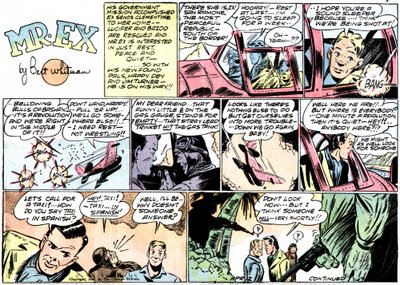 Mister Ex was some sort of a secret agent, forever embroiled in international intrigue of all sorts. The stories, breathlessly told with no time wasted discussing background, tell us just about nothing about our hero. His gimmick, I'm told, is that he was a master of disguise, but that seldom figured into the plotlines in any significant way.

At the beginning of the series,which debuted January 19 1941, our hero was bearded, a rarity in those days. Bert Whitman, the creator of the strip, probably thought it would be a great way to identify his main character. However, I guess the American public just wasn't ready for a hirsute hero, and the soup strainer disappeared in less than six months.

The strip started off slow, with Ex in a small-time drama regarding a mistreated kid. It wasn't long, though, before the hero was getting involved in a banana republic revolution, then pretending to be a Nazi to infiltrate a spy ring, then going for a nautical adventure hunting German subs. It was all very exciting, and once Whitman got into the groove he wrote a pretty good little adventure strip. Once the Comic Book section ended, though, Mr. Ex only made it a few months in the regular comic section, ending July 4 1943.

But that's not quite the end of the story. In the final panel of that July 4 Sunday it was announced that the strip would continue, renamed The Whizzer. However, the next Sunday no whizzing was to be found in the Trib's comic section. It wasn't until September 5 that a strip bearing that name appeared. The renamed strip only ran once more, on September 26, before it disappeared for good. Question is, did The Whizzer appear on a regular basis elsewhere? All I can say is that I haven't found it anywhere. Anyone? [I originally posed this question way back in 2006, and I haven't heard anyone yet volunteer any additional information]

Comments:
The quality of the artwork sure took a dive between the second and third strips you reproduce. Whitman was feeling deadline pressure, perhaps? Interesting, though; I'd like to see more of this strip.

Hi Alan,
I have come across two more dates for The Whizzer comic page - September 19th and October 3rd, 1943. These are both from the Boston Sunday Post (I also have the Sept. 26th example you mention above). Cliff

Hi Cliff --
Great catch there. Any chance that you could send a scan of one of these, preferably the final one? Would love to share with thje blog readers.