Obscurity of the Day: Betsy Bouncer and her Doll 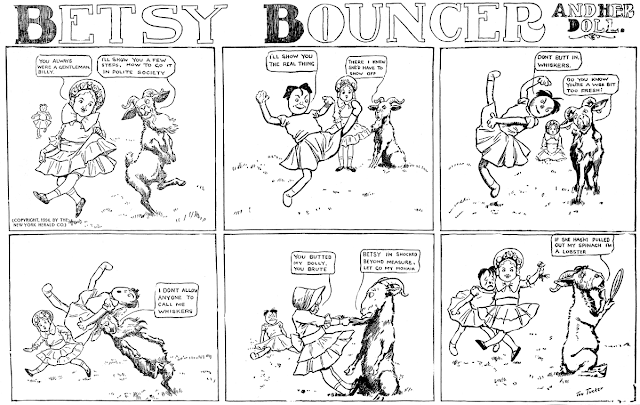 Thanks to Barnacle Press, I know that the single example of Betsy Bouncer and her Doll in my collection (above) is not perfectly typical of the series. If you go over to their archive of the strip, you'll see that the standard gag was that the mean doll would try to do something nasty to Betsy, but her prank would backfire. In the above example the doll might want some chiropractic therapy as a result of her pranking, but I think the poor goat gets the worst of it, and at the hands of the supposedly sweet li'l Betsy at that.

Betsy Bouncer ran in the Sunday comics section of the New York Herald from August 14 1904 to May 14 1905, and is the only known credit for someone who signed themselves 'Tom Tucker'. Except I don't think there really is such a person.

As much as I distrust my own abilities as an art spotter, I have to climb out on a limb on this one and say that I think Tom Tucker is actually a pseudonymous E.W. Kemble. The style is right, though predictably not of the highest caliber since his considerable reputation is not at risk. The signature, too, is quite 'Kemble-ish'.

But why would Kemble, who freely signed his Hearst comic strip work until he parted company with them in 1902, take a pen name? I think I may have that answer. According to the Wikipedia bio of Kemble, he went to work for Collier's Weekly in 1903. My guess is that they didn't like the idea of him moonlighting, and so he did this series under an assumed name.

The evidence, of course, is slight. But I find the source (moi!) utterly convincing. What say you?