Obscurity of the Day: On the Sidewalks of New York 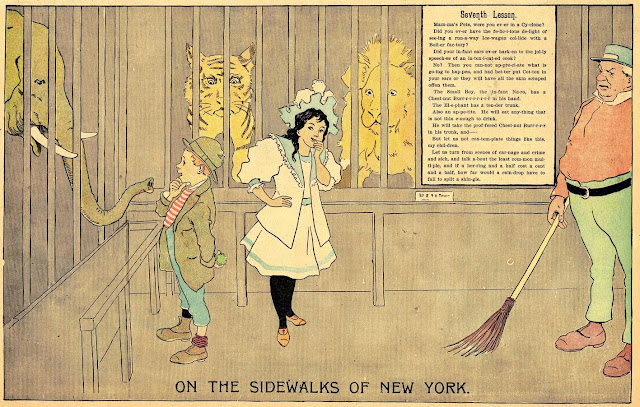 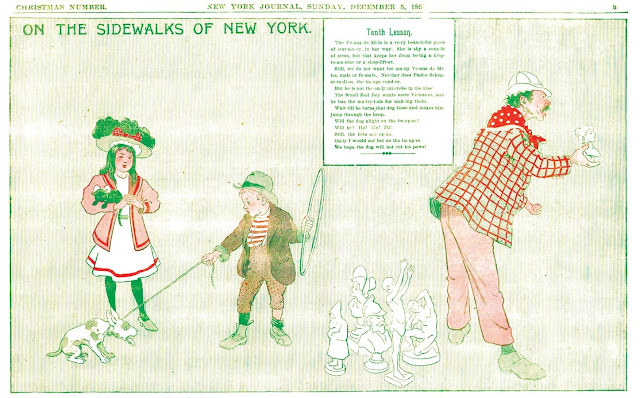 T.S Allen, who made his cartooning name imitating the street kids of Australia's Phil May, could well have made his debut in the newspaper comic-stripping series world with this New York Sunday Journal feature, On the Sidewalks of New York. Unfortunately you can't tell that by the listing for the feature in my book. I only had the series running from January 1 1899 to April 15 1900. However, according to Cole Johnson, who supplied the samples above to prove his point, an earlier series of On the Sidewalks of New York was running by November 1897, and ended around February 1898. Only problem with it is that Allen wasn't bothering to sign it. But I'm reasonably sure this is his work.

Since I know that Allen's first non-series cartoons for the weekday Journal appeared in October 1897, it appears that this series is, by a far piece, his earliest. Worse, if the numbering on these samples is correct, the presumably weekly series would have started no later than October 3, or even sooner if a week were missed here and there, which was likely in those days. That puts Allen's arrival date back some.  Too bad these panels either didn't appear in the microfilm, or escaped the eyes of the indexer, as a start date for Allen's first series, and perhaps his career at the Journal, would be nice to have. Yet another item for my "to be researched" list. Oh well. Good to have job security.

A big thanks to Cole Johnson for the samples!

Comments:
WOW-- a prelude to mayhem. (I knida hope that agitated Tiger gets that little bastard for screwing with the poor elephant) Is there any way you can post a few more of these sometime?