Obscurity of the Day: Duffy 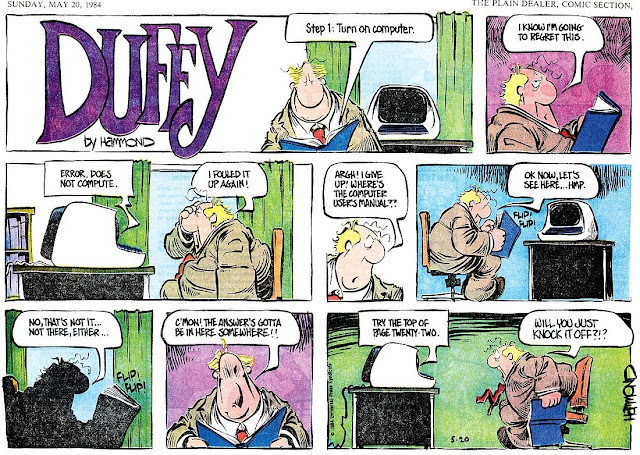 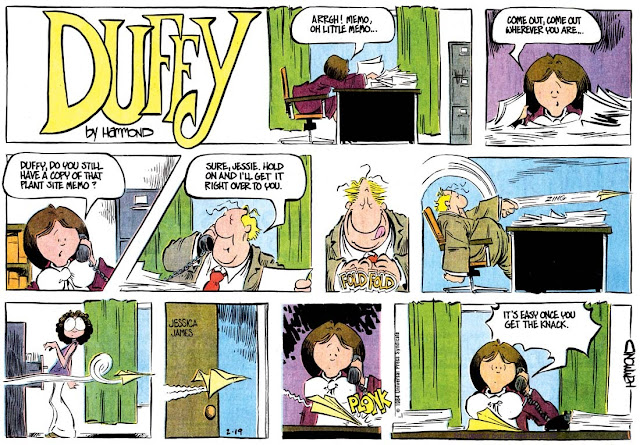 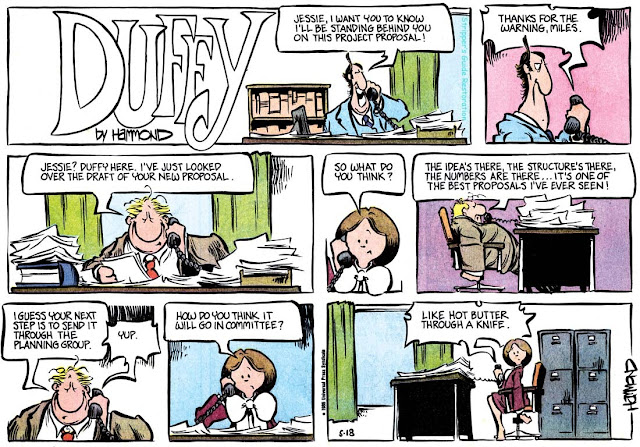 It may be unfair to label Bruce Hammond's Duffy as an obscurity. The strip lasted almost a decade and a half, at its most popular was claimed to be running in 90+ newspapers, even got the reprint book treatment once. On the other hand, it is a strip that certainly did seem to fly under the radar for much of its existence.

The strip debuted as a Sunday and daily feature on November 16 1981. The setting was a business office, and the main character, Duffy, was a disheveled middle-management paper-pusher type. His comic foils include Jessica James, a ladder-climbing junior exec, Naomi, a nuts-and-berries secretary, Miles Van Smoot, an air-headed executive, and the boss, W.G., who is heard but never seen.

With most of the gags about office politics, technology, and upper management, you could think of this as a precursor to Dilbert, but I think that would be off-base. Duffy owed a little more, I think, to the style and gags of Jeff MacNelly's Shoe. Take off the bird wings, and move the Treetops Tattler gang into a generic office setting, and you get close to the feel of Duffy.

Although Duffy fared well out of the gate, by the late 1980s it seems to have disappeared from most of the 90+ papers that had run it in its best days. As an office-based strip, perhaps On The Fastrack, which debuted in 1984, siphoned off some clients, and certainly in the early 90s Dilbert was killing off the market for all other workplace humor comics.

Hammond and Universal Press Syndicate finally pulled the plug on Duffy sometime in 1996, by which time my impression is that its client list was very, very short.

Comments:
Duffy will be forever known as the comic that replaced Cincinnati's own Judge Parker in the E------r on March 29, 1982.

As you have seen in the Cincinnati Post Comic Strip Index Retro, the Post got rid of Rex Morgan MD in 1994. The comic that replaced it? Dilbert.