Obscurity of the Day: Mayor Mudge 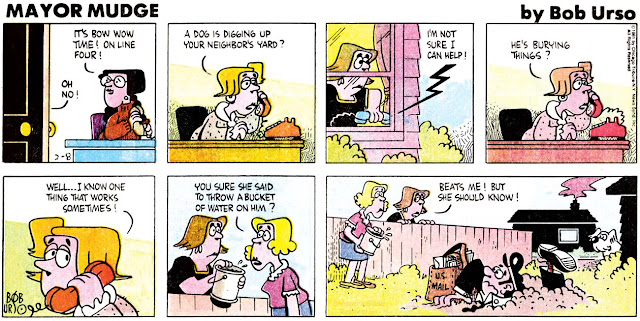 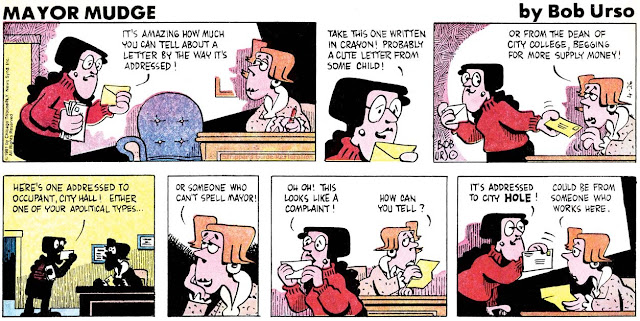 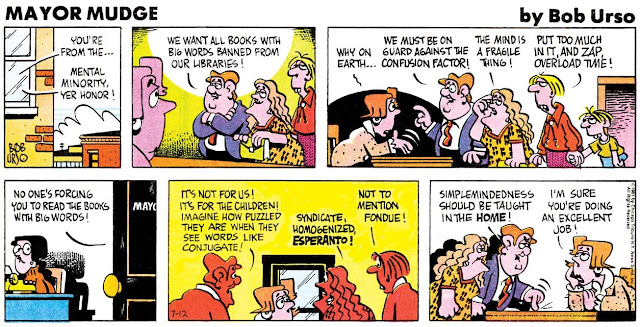 In 1980 it might not have been the smartest strategy for cartoonist Bob Urso and the Chicago Tribune-New York News Syndicate to try to interest newspaper readers in Mayor Mudge. A scant six years after Nixon resigned from office, they faced a real uphill battle to convince readers to willingly take the side of a politician, even if it was a woman who ran for city mayor on a lark.

Urso did provide himself with a rich vein of humor to mine. Imagine a whole town full of wacky and unreasonable voters all knocking on the mayor's door to provide straight lines. Then you've got a city hall full of petty backbiting bureaucrats, not to mention an involuntary house-husband (in the days when that was still a noteworthy familial arrangement). The strip was obviously still finding its footing in the early months, but it did manage to get off some good gags -- the last example here being a sidewise slam at the Moral Majority, for instance. And I don't know how the third sample got past the censors -- if I'd been drinking coffee when I read that one there would have been a pretty good spit-take.

Mayor Mudge came and went with no notice or fanfare that I can detect. As best I can tell, the series began in December 1980 with Mudge unwittingly dumped into the race for mayor, and my latest samples come from September 1981. Anyone with further information about the extent of this run please contact me. Also, if you have any biographical information on Bob Urso, who seems to have not existed apart from this feature, please let me know.

Comments:
From a quick Google Search, it seems he is still teaching art at a university level and is also a miniature gun officionado. Has even written a book on them.

i always assumed it was loosely based on mayor jane byrne of chicago, who had just gotten in around that time. similar hair, even. at least that's what it looked like to my 11 year old eye.