Obscurity of the Day: Pigtails 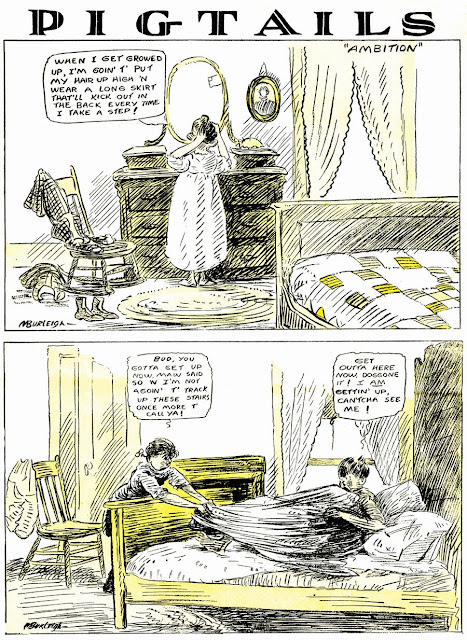 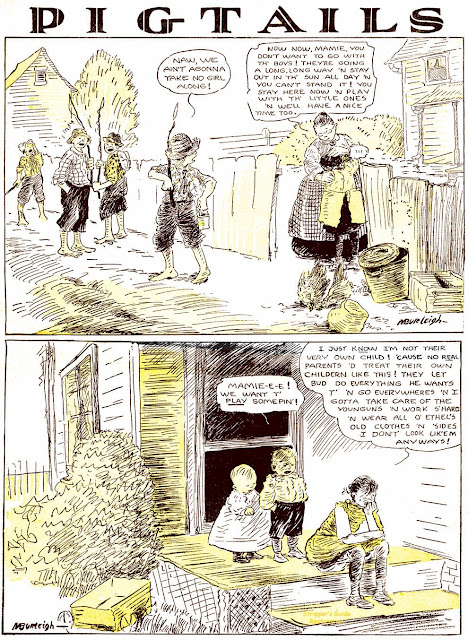 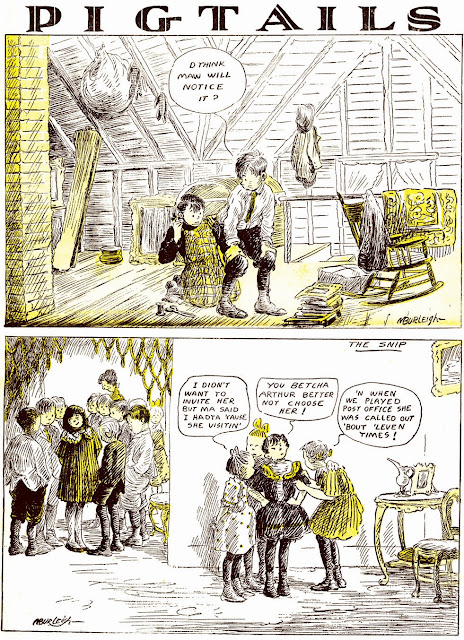 When the Chicago Tribune lost Clare Briggs, it must have been pretty traumatic -- he was such a presence in that paper. So it's not surprising that in subsequent years they tried in various ways to replace his spirit. Who would have guessed that one of those replacements would be a woman -- Mildred Burleigh.

Briggs was a very masculine sort of cartoonist -- he set many of his cartoons in pool halls, golf courses and around poker tables. His men often had a stogie clamped in their jaws, they could talk  tough, and they bemoaned the indignities of having to put up with their better halves. As children his characters were wild boys, running barefoot down to the swimming hole, and, when corralled into a schoolroom, dipped the little girls' pigtails into inkwells.  Not that Briggs couldn't draw cartoons from a woman's perspective -- he did so and he did so very well. But men were his specialty.


Mildred Burleigh drew in an amalgam style of two Tribune greats -- Briggs and John T. McCutcheon. Her subjects were straight from one of their favorite idea wells, too -- nostalgic for childhood. The difference was that her cartoons about kids focus primarily on the perspective of little girls. A quick glance at a Pigtails cartoon would give no inkling that neither of those old masters was at the helm. Not until you read the word balloons would you be let down just a slight bit. While Burleigh had the art chops, her writing was a bit unfocused compared to those masters.

It sure didn't help that the Sunday version of the cartoon, which ran from February 25 to August 19 1923, consisted of two panels that sometimes seemed, and sometimes didn't have, anything to do with each other. The middle example above, for instance, seems to be a two panel strip, while the other two have separate subjects for each panel. Rather confusing to the reader.

The original version of Pigtails, which ran in the Chicago Tribune on Sundays in a daily format, ran at least from June 12 1921 to October 15 1922. The second version, the color Sunday, ran in the Tribune's sister paper, the New York Daily News, from February 25 to August 19 1923. It has yet to be determined whether the Daily News version is merely reprints of the Tribune cartoons, or new material.