Obscurity of the Day: Little Filipino and the Chick 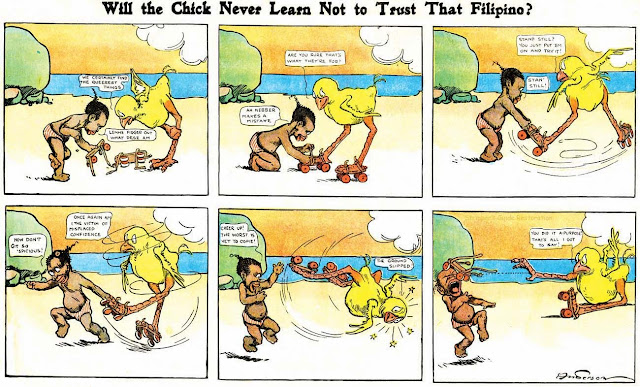 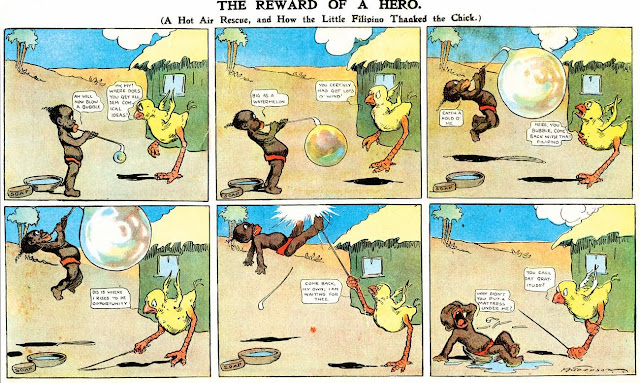 When I was taking literature classes in school, I was often astounded at the hidden meanings my teachers could extract from the texts we studied. I've never become really adept at 'reading between the lines', or at least I've never learned to do it to my complete satisfaction.

In the bizarre 1903 New York World series Little Filipino and the Chick, it's abundantly obvious that the comic strip isn't merely about a child and his overgrown baby chicken. What it's really about, though, I cannot decode to my satisfaction.

Cartoonist Carl Anderson (yes, the fellow who many years later created Henry) gives us a whopper of a clue in the title, that the little kid is a Filipino. Okay, that makes sense. In 1903 the U.S. had just officially concluded a war with the Phillipines, having convinced them that when the U.S. is feeling warmly paternalistic and takes control of your country that you better darn well not get uppity and try to say "no thanks."

Although the war was officially over, there was no shortage of insurrectionists (that's what you call freedom fighters when they're on the wrong side) making life interesting for the American occupiers. It seems reasonable, then, that the Little Filipino, who seems dead set on making that poor chick miserable, is meant to represent the Phillipine insurrectionists, or the Filipinos in general.

The giant chick is where I run into trouble. It seems reasonable that it represents the U.S. But why would Anderson use that particular representation? An eagle, maybe, but an overgrown baby chicken? And if not the U.S. in general, who or what does the chick represent?

Whatever it all means, here's what I do know. It ran in the New York World's Sunday Funny Side comic section from February 1 to September 27 1903.

While you're pondering the hidden meaning of Little Filipino and the Chick, you will also no doubt notice the sumptuous coloring of the strips. Trust me that your computer screen doesn't hold a candle to the coloring of the original pages. Here's a blown-up detail from one strip: 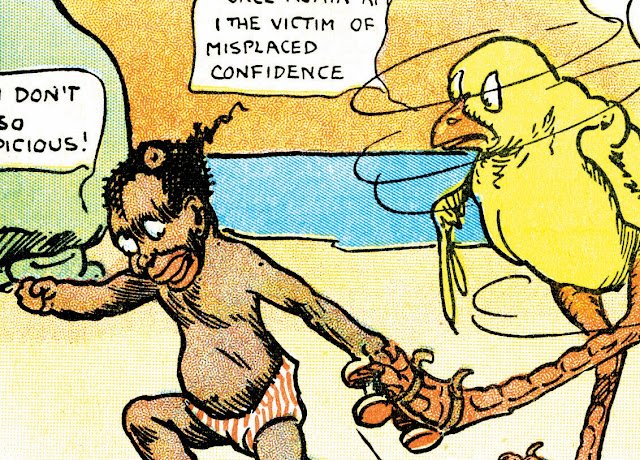 If you look at this image at full size (click once or possibly twice on the image) you'll see the intricate patterns of dots that make up the color. Note that there are varying patterns, too. Some patterns look like a shotgun effect, some are regimentally straight, there are even ones that are in solid lines. Amazing, isn't it? If you've ever wondered about the technical work behind coloring a newspaper comic strip, then you want to head on over to The Back Flap Blog, where Phil Normand has explained some of the technical wizardry behind newspaper coloring in an easy to understand way. Great post, Phil!

Comments:
Hello, Allan---The "FILIPINO AND THE CHICK" idea was one that dear to Anderson's heart. In 1896 they can be found in the early Sunday N.Y.JOURNAL , with the "Filipino" more conventionally an African native. As late as 1916 he apparently was considering making an animated cartoon with the bizarre characters.