Due to circumstances well within my control ---- I just forgot to create the posts --- there will be no Sci-Friday, Herriman Saturday or Jim Ivey's Sunday Comics this weekend. All of those regular features will return next week.

Comments:
Bummer...I'm missing my Adam Chase fix! Glad all is well, though...

It does happen from time to time, we all understand this.

It's like getting on the school bus and then remembering that you forgot your lunch, or to do your homework! Enjoy the day off.

I am lost in a sea of Crossover Events and angry emotionally-stunted pundits. GAAAH-- Get back in there and take one for the team for God sake! 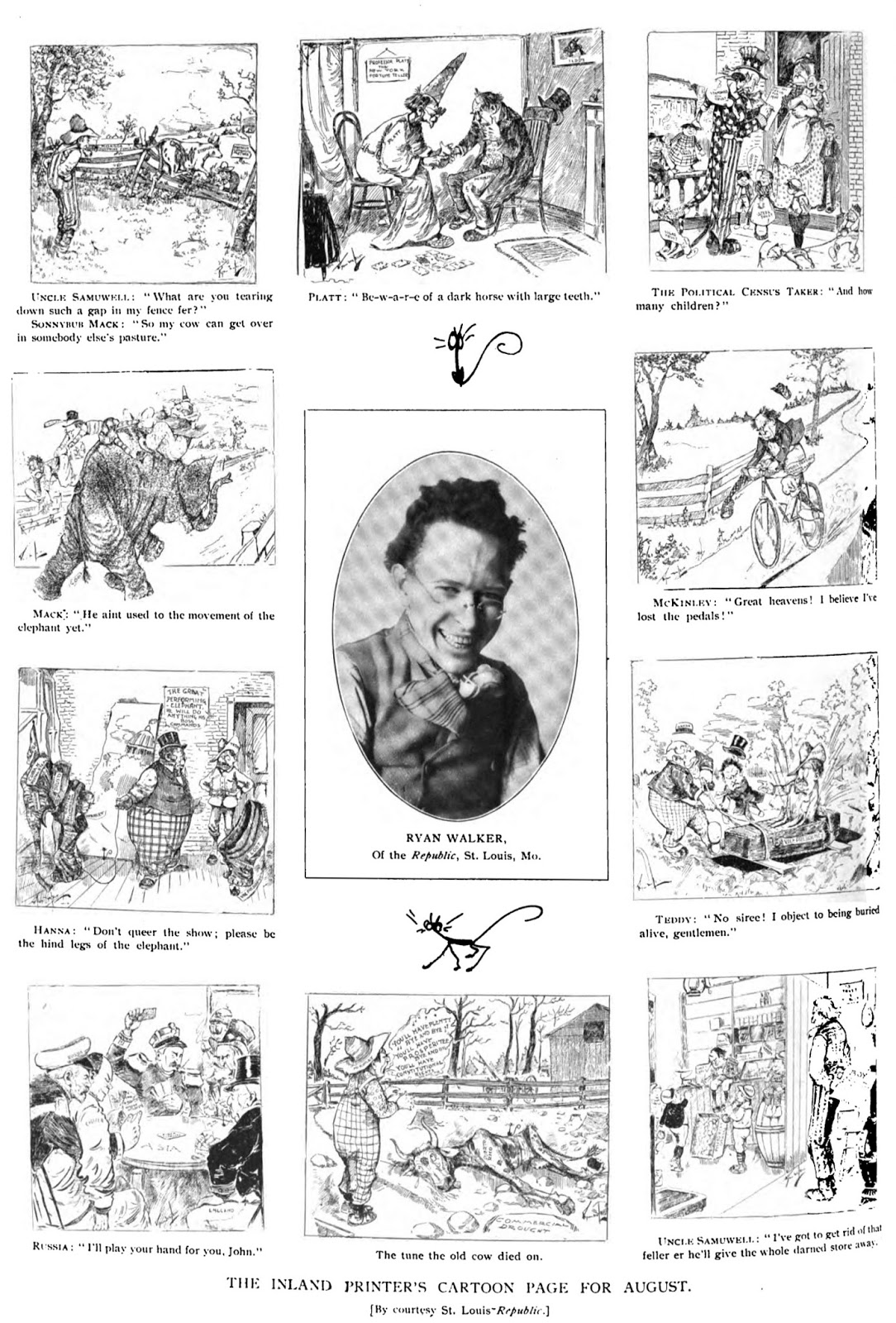 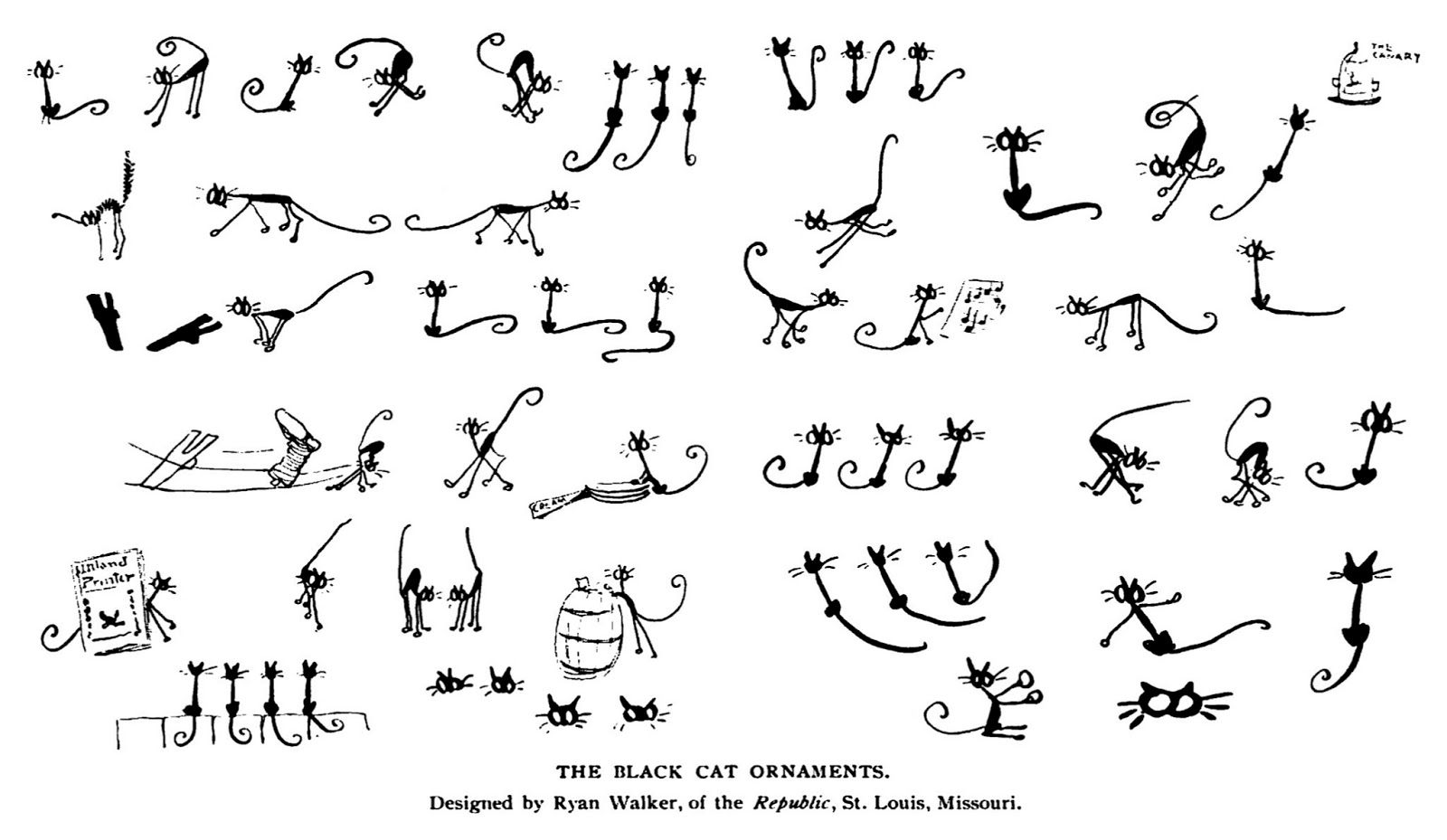 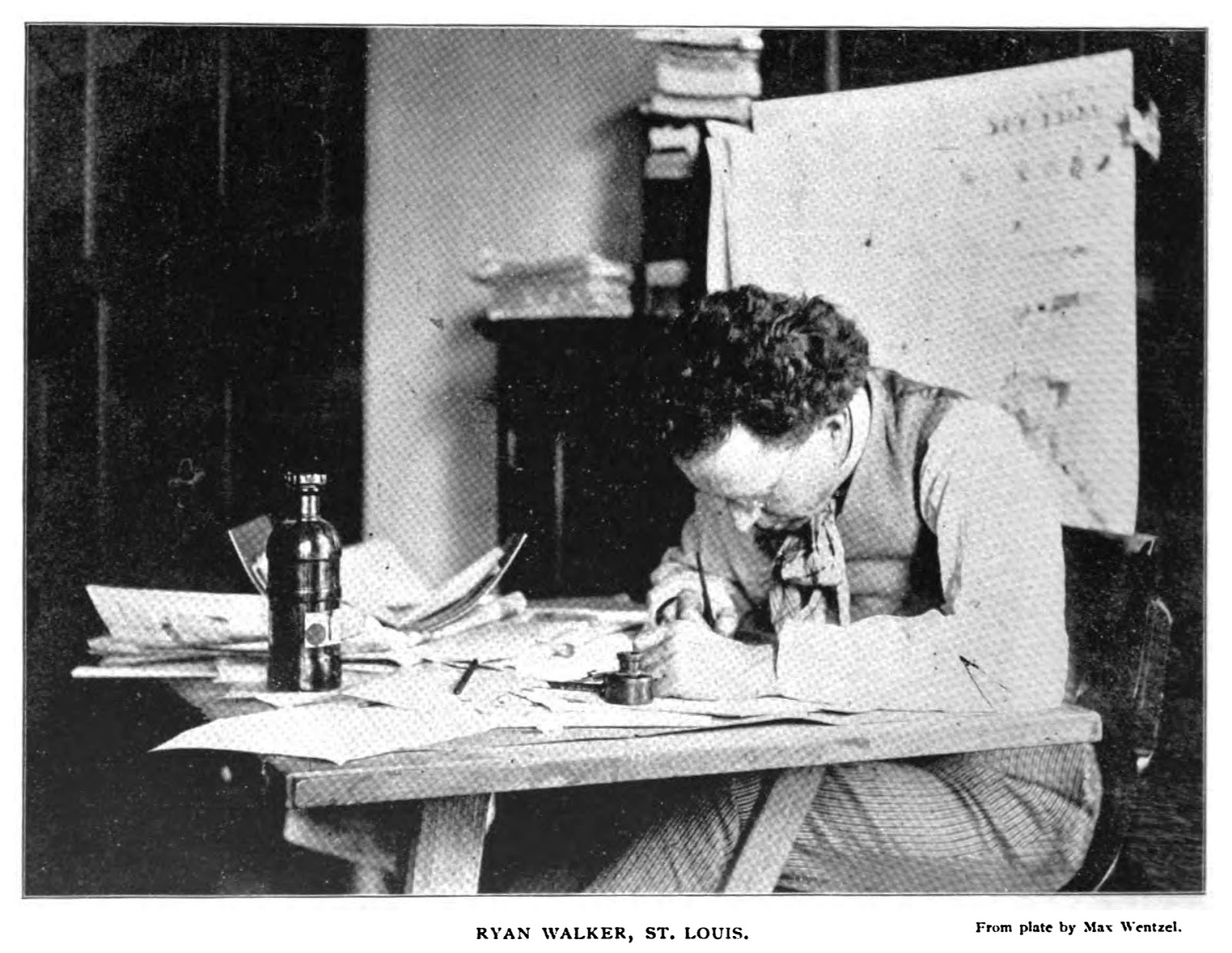 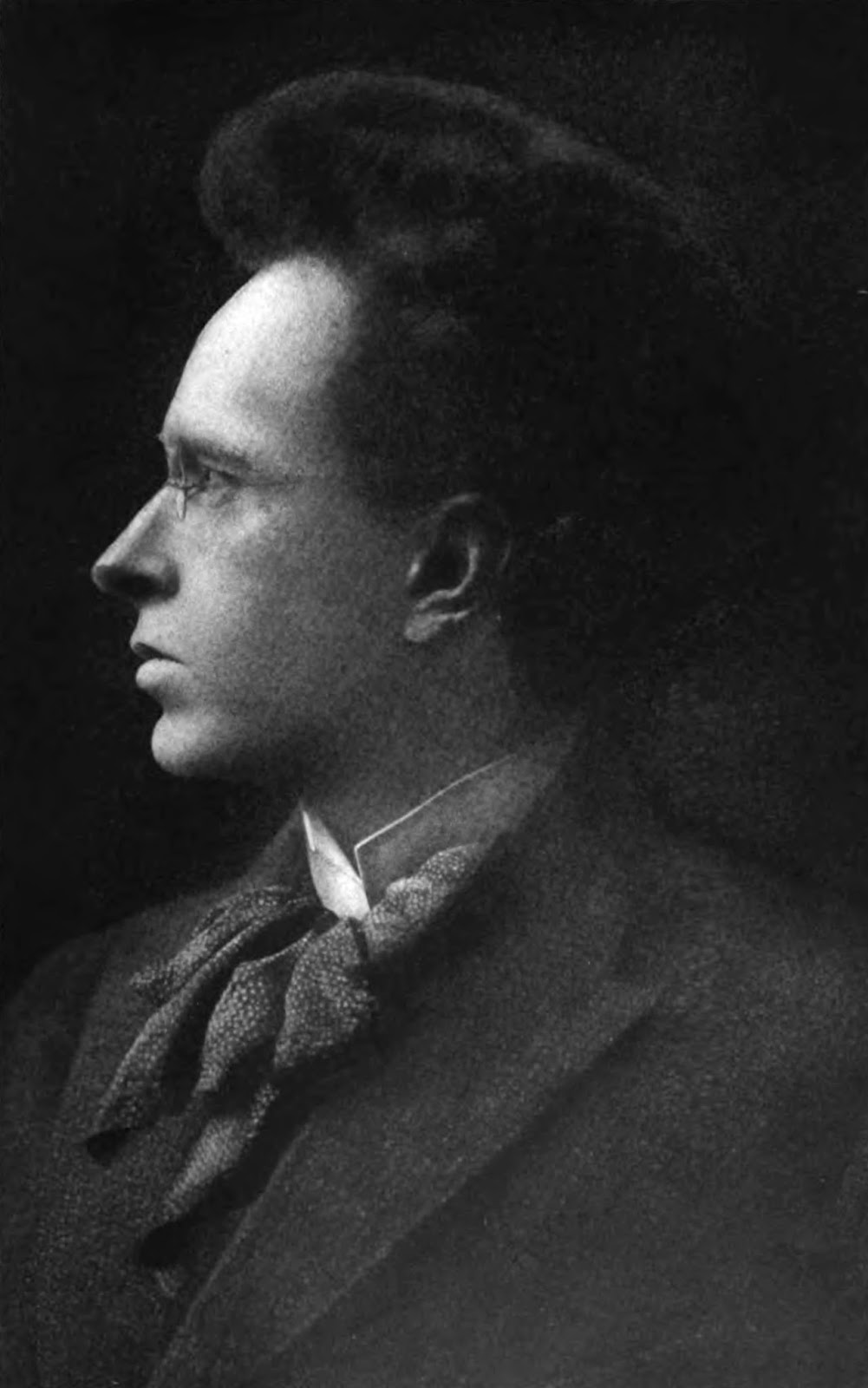 The Arena, April 1905, published the above photograph and a 15-page illustrated article, “Ryan Walker: A Cartoonist of Social Protest”.

The New Adventures of Henry Dubb can be viewed here.


Walker’s life was examined in the Daily Worker, which also published his obituary. The 1850 U.S. Federal Census listed Walker’s mother, Dulcina, whose maiden name was Ryan.

Obscurity of the Day: Fenton (plus Clyde)

Long before Wiley Miller became a comics page star with Non Sequitur, his first attempt at comic strip success was with Fenton, which debuted from Field Enterprises on March 7 1983. It was not a painless birth. Fenton had first been accepted by the Chicago Tribune-New York News Syndicate, but they sat on the strip for almost a year before Miller gave up and took it elsewhere. Eventually Field Enterprises bit, but they also sat on it for a year before releasing it. When Field did finally get around to offering it, the sales were pretty good. Wiley says that by the end of the first year he had over a hundred papers, not a bad start at all.

The strip deserved success. It offered a fresh voice, good art, and consistently nail-on-the-head sardonic humor. The titular star of the strip is an assistant to the mayor of Cynical Falls, but his real job is to be the town curmudgeon, a business in which he excels. His foils include his grandson, the mayor and the mayor's daughter, and the local monks (!). The tone is in the same vein as Non Sequitur, but Miller ties his hands a bit with a regular cast, a problem he remedied in his next strip.

I don't know the circumstances which ended the strip, but there are a few obvious possibilities. Wiley may have canned the strip when he got his new gig drawing editorial cartoons for the San Francisco Examiner, or there may have been friction problems when Field Enterprises sold out to Rupert Murdoch, and then quickly turned around to North America Syndicate.

The latest I can attest Fenton to running is December 22 1985.

As anyone who was there at the unveiling of Non Sequitur's vertical Sunday orientation can attest, Mr. Miller is not merely an excellent cartoonist; he's also a marketer and inventor -- sort of a Thomas Edison of the comics page. His ideas on how to snag new clients didn't begin with Non Sequitur, though. As you see in the Sunday above, Fenton had an ancillary panel feature starring a horse called Clyde. Since that panel is copyrighted and dated separately, it is my assumption that Miller wanted to try selling it separately (a great item to take the place of a quarter page strip's title panel, dontcha know). I have not actually seen it running separately, but knowing Wiley that's what he was up to. Clyde debuted as part of the Fenton Sunday on June 2 1985.

The marketing savvy doesn't even stop there -- Clyde the horse ties into another venture of Wiley's. At the time, he also had a little cottage industry going with his wife, who attended a lot of horse shows. They offered note cards at the shows featuring horse cartoons. You don't have to guess if the horse in those cartoons was a dead ringer for Clyde. That wily Wiley, always thinking!

Comments:
I am a fan of Henry Syverson, whose work was featured in the Saturday Evening Post in the early years. Do you have any information on him?
Thanks, Annemarie 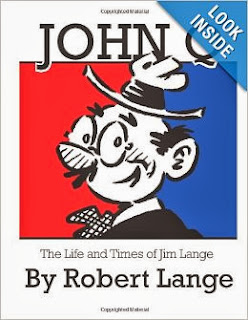 John Q: The Life and Times of Jim Lange

How do you in good conscience write a negative review of a book written by a son about his dad? I know I sure don't want to be that jerk. But I think it only fair that prospective buyers be forewarned about what they are purchasing .

Based on the title of John Q: The Life and Times of Jim Lange, I assumed that I was purchasing a biography of the Daily Oklahoman editorial cartoonist. In fairness, when I ordered the book on Amazon, there was a 'Look Inside' feature that I didn't bother with. Who needs to see what the inside of a biography looks like?

Well, if I had taken the time, I would have seen that the book consists of short paragraphs on each alternating page, and a photo or cartoon on each facing page. Some of these short paragraphs (some are just a single sentence) comment in some way on the photo or the cartoon, or tell some tidbit about Lange. There is no biography here, just reminiscences plus some accolades written by Oklahoma notables.

If the book had been called an admiring son's memorial or a scrapbook, that would be much closer to the mark. To say the book tells the "life and times" of Lange is nonsense.

I also think the price is on the high side. A bunch of blurry black and white photos and a very small selection of cartoons (I count about twenty-five), and so little text that I could literally read the whole book while standing in a supermarket checkout line -- $16 seems out of line.

I commend Robert for wanting to memorialize his dad, but I think this book is the sort of thing to be shared with relatives and personal friends. It is not really a commercial product that would appeal to cartoon fans or those who fondly remember his work in the Oklahoman. 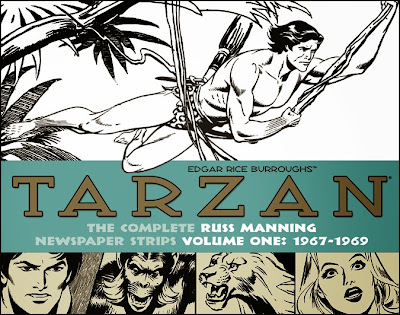 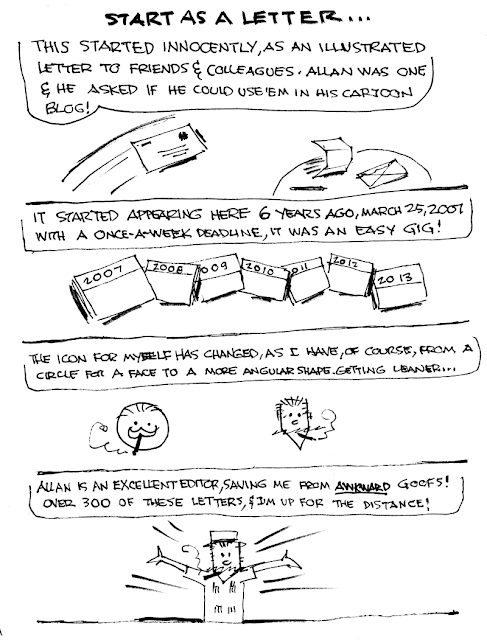 Comments:
I truly look for each weekend to Jim Ivey's Sunday Comics. Thanks Jim and Alan and keep 'em coming!

Jim Ivey's Sunday Comics is an essential part of my Sunday Funnies routine.
Echoing thanks to Jim and Allan.
D.D.Degg