There are few things that succeed in both scaring me and filling me with joy as rediscovering a forgotten newspaper comics syndicate.

Joy, I guess, is obvious. A researcher is delighted to make a discovery, of course. But scary? You betcha. Innocently paging through some weird old obscure paper and suddenly coming upon not just a single unfamiliar comic strip, but a whole bloody page of them makes me feel like I am far away from having a complete grasp on newspaper comics history. One obscure feature, no big deal. But a dozen of 'em? Sheesh. Makes me feel like a rank amateur!

So that was the feeling I got when I first happened upon a page of comics and panels from the very obscure Van Tine Features Syndicate, which discovery happened about ten or so years ago. In the case of finding Van Tine, there was a sense of relief, too, layered on top of it.

I had read that there was a newspaper comic strip version of Baron Munchausen and even seen a sample or two of it -- but never in a newspaper. Because Baron Munchausen was done by star golden age comic book artist Klaus Nordling, I'd seen samples in comic book history publications. Of course none of those appearances gave the name of a newspaper where the sample was found (that would make things too easy), but I knew something was probably out there somewhere!

A decade or so down the road and I haven't really learned much more about Van Tine. Oh, I've found more newspapers that ran the syndicate's weekly offerings, but I haven't been able to uncover any background information. Who ran this syndicate, and how did it operate? How did they put together their bullpen of cartoonists, and how did the whole operation end up in the dustbin of history?

What I can say is that the entire syndicate offering of ten comic strips and panels, plus a puzzle feature or two, had debuted by September 2 1935. I have two different papers for which that is the starting date (as dated on the features themselves -- the papers in one case ran the material late and in one case early). Unfortunately the strips read like second installments, so perhaps the syndicate's first releases were to be August 26.

I also know that the syndicate imploded in April of 1937, when almost all of their features started appearing in reruns. I've seen a few of the features running as late as 1939, but I'm certain that has to be newspapers using old stock -- I'm guessing the syndicate itself stopped distributing material shortly after the reprints began.

Here are a few other tidbits. Of Mr. (or Mrs.?) Van Tine I know nothing, except that I found some slight indication that it could be A. A. Van Tine -- which doesn't help any in uncovering other information. Also, the syndicate's business offices were on Broadway in New York City. Also, they seem to have been distributed little magazines about advertising in 1937, about the time that the syndicate business was falling apart.

The syndicate's offerings were a complete package -- there seems to have been no selling of individual features. The offering was a full comics page, and most subscribers ran it as such without much tinkering. Perhaps the most amazing thing about these offerings is that in the year and a half they ran, the features were all consistent. Nothing was dropped, and there was only one addition.

Follies of the Great -- Ripley-ish panel with art by Chuck Thorndike, and written by someone bylined Plotkin.

Bozo and the Baron -- a top-hatted kid and a big dog, badly drawn by Larry Antonette; I'm not sure which name in the title goes with which character!

Don't Be Like That -- a strip whose only continuing character was the 'host', Sir Rodney. Very well drawn by Ray I. Hoppman, an old-timer who always seemed to pop up at these fly-by-night syndicates.

Baron Munchausen -- from the perspective of history, this Klaus Nordling strip, done under the pseudonym Fred Nordley, should have been the headliner of the bunch.

Rumpus -- I've mentioned that Art Helfant sold to every hole in the wall publisher or syndicate he could find, and Van Tine was no exception.

Don't Laugh - Superstitious Beliefs -- A Ripley-esque feature that gives the impression of a strip, but each panel is actually a separate vignette. The author was 'Blumey', who, according to copyright records, was Abraham Blumenfeld. Blumenfeld copyrighted this feature in 1931, so he'd been shopping it around for quite awhile. Art was by someone named Ernest Smythe sometimes, other times by someone who signed themselves with a little symbol that looks like a box with the characters /a in it.

Oddities-Land, Sea and Air -- another Ripley copycat, this one with amateurish art by someone named C. Y. Renick.

Here 'n There -- pioneering newspaper cartoonist Gene Carr still plugging away here. These look suspiciously like he just put a new title on some of his old Everyday Movies and Just Humans panels of the 1920s.

Kitty Kelly (and Nelly Shannon) -- the only Van Tine feature to have an ongoing story, about a pair of would-be models/dancers/actresses. Kitty originally got solitary billing, her gal pal was added to the title on 1/6/36. Gene Carr once again proves that he can draw any type of strip more than passably. However, he jumped ship from this one after 5/25/36, and was replaced by someone who signed themself just 'Ro'.

Johnny Beans -- Gene Carr left Kitty Kelly to start this feature about a kid, the only change to the line-up during Van Tine's existence.

So there's my brain dump on Van Tine Features. To get any further I guess we'd need the help of someone who is an expert on tracking down these obscure cartoonists. Hey! I know of such a guy! Alex Jay, can you please tell us some more about some of these guys?

(You can't hear it through the interwebs, but Alex said yes; he'll be contributing a whole batch of Ink-Slinger Profiles in the coming week or so about these creators. Thanks Alex!!!). 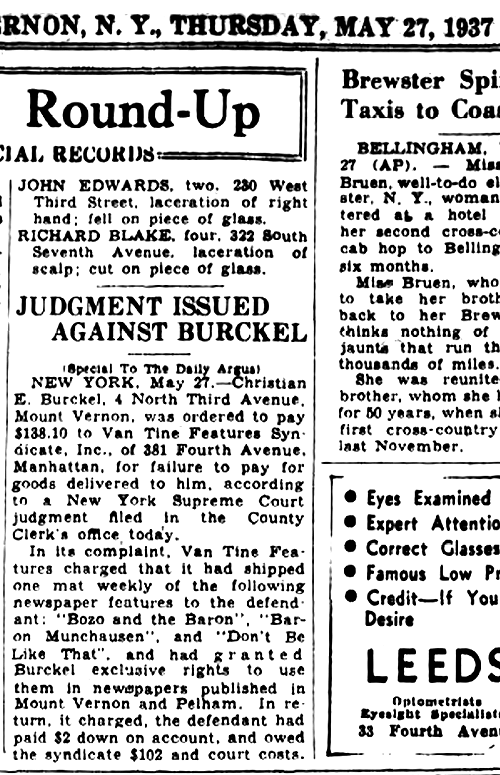 Alex Jay sent me this clipping from the Mount Vernon Argus. The small item tells us that that the syndicate did charge for its wares, as opposed to offering them in trade for advertising space (a few syndicates did try the latter model). It also tells us the likely price for the service, $2 per week with a one-year contract. That's very cheap, even for the Great Depression, but then it might have been discounted as the timing here is close to when the syndicate sank out of sight.