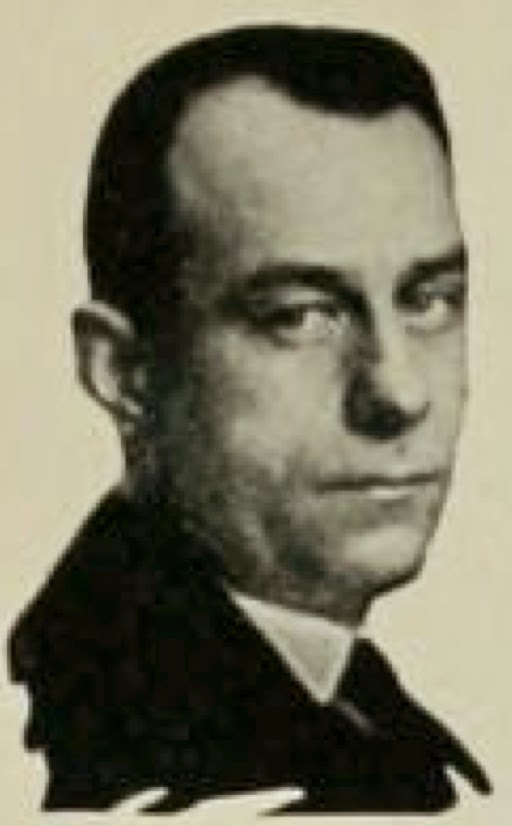 Eugene Gilroy “Gene” Carr was born in New York City on January 7, 1881, according to his World War I and II draft cards, which had his full name. Census records said his parents were Charles and Sarah, and he was the second born. Who’s Who on The World (1922), said Carr was educated in public schools and never studied art. The New York Sun, May 2, 1915, published a profile of Carr and said:


Eugene Gilmore Carr had an unusually inauspicious beginning in the work for which he is now so well known. He is a New York boy, born here on Manhattan Island in 1881, and all through high school he was drawing pictures more often than studying mathematics or physics. When he left school he went straight downtown to the office of the now defunct Recorder and asked for a job. He got it, but held it only a short time, when he thought he saw a better opening in lithographic work. He landed his second job in that field, but quit in a week because he didn’t like to have his hands continually gummed up with paint and inks. Then he went back to the Recorder and made his first drawing on a certain day. It appeared the next morning, and when he reported for work that noon he was filled with joy and pride As he was going up the steps into the building he met one of the editors coming down, who said casually:

“Say, Carr, It’s lucky your first drawing for the Recorder was printed to-day?”

“Because It’s the last issue of the paper. The Recorder busted as soon as the presses stopped running early this morning.”

Somewhat dismayed, the young man hustled upstairs and found the story to be true. Then he applied for work at another newspaper office, obtained a chance and was promptly fired. This seemed discouraging, and he thought he would try another climate—Philadelphia, for instance. So he stepped on a train to the Quaker City and tackled the Philadelphia Times.

Sure, he could have a chance; commence right off, said the Times people, and breathing a prayer of thankfulness Gene Carr grabbed a pen and a sheet of nice white board. He finished his picture, turned it in, and went to his lodgings, happier than words can tell. He woke up to find the Phila- [text missing] of existence, vanished off the face of the earth. After thinking over the situation a few minutes Carr decided that if he really was a second Jonah—and of this he had little doubt—he would make a record as such. If be was going to bust everything he came in contact with he’d bust something worth while. So he came back to New York, picked out what was at that time one of the largest and most prosperous papers in the country, and got another job. But his luck had turned. The paper didn’t “bust,” and Gene Carr just kept on climbing.

Exploits of “Lady Bountiful” Will Be Pictorially Pet Forth in Vaudeville Offering.

Miss Mamie Gilroy believes she has obtained a great subject for vaudeville in the exploits of “Lady Bountiful,” which have been set forth pictorially in the columns of an evening newspaper by ’Gene Carr, the artist. The actress thinks there will be much comedy in the misadventures of the heroine trying to do good to gamins of the street.

Robert Davis is writing the sketch, while to Louis Gottschalk and Jean Schwartz has been assigned the task of composing suitable music to accompany it. Miss Gilroy will be supported by a small company. 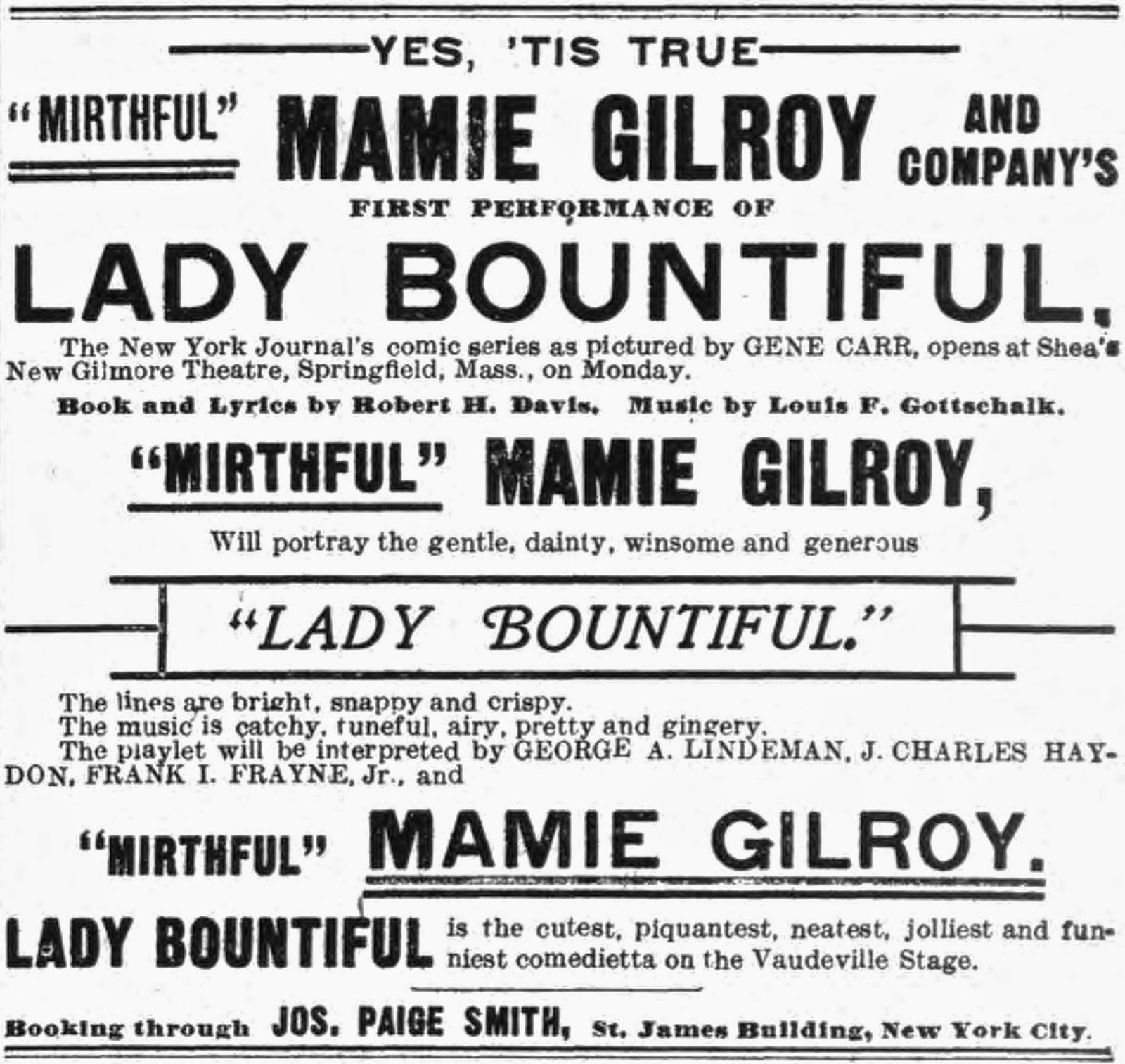 Carr's older sister Irene was the model for Lady Bountiful as told in The Evening World, April 27, 1903:

Lady Bountiful as Gene Carr Made Her, with His Sister as the Model.

The ceremony was of more than passing interest, both from the beauty and social standing of the bride and the fact that by it the original of the “Lady Bountiful” sketches was made a matron.

As Irene Carr Mrs. Harrison was the model from which her famous brother, Gene Carr, drew his piquant and stylish “Lady Bountiful.” Owing to the fidelity to the beauty and grace of the model with which Mr. Carr drew his patroness of his merry street urchins, Miss Carr had more than a local celebrity, and ofttimes, to her great embarrassment, she heard staring strangers remark how much she “looked like Lady Bountiful.”

After the ceremony, at which Gene Carr acted as best man, there was a reception at the residence of the bride’s parents, No. 1239 Tinton avenue, Bronx.

Mr. and Mrs. Harrison left for a trip to Atlantic City and the South.

Some of his daily cartoons and comics for The World, from 1903 to 1011, were All the Comforts of Home; Handy Andy; Home, Sweet Home; Mr. Al Most; Mrs. Nagg and Mr.—; Phyllis; and Willie Wise can be viewed here. The San Francisco Call published Carr’s Sunday strips Stepbrothers and Mr. Al Most; samples from 1903 to 1912 are here.

The 1900 U.S. Federal Census recorded the Carr family of eight in the Bronx, New York at 1275 Union Avenue. Carr’s father worked at the police department. Carr was a newspaper artist. Who’s Who said said Carr married Helen Stilwell, an artist and writer, on August 22, 1906.


Got the Wrong Man

Warrant Out for Gene Carr on Murder Charge.

Wanted in Connection with Killing of Cameron Cool, Wealthy Horseman.

Wife of Illustrator Declares That He Was at Home on Night of the Crime and That Some One Must Have Been Using His Name—Says There Is Some Mistake.

New York, July 26.—When the telegram from Chief Long of Wilkes-Barre was received here it was turned over to Detective McKeon. With the telegram came a supposed description of Carr or Vallee, which had him wearing whiskers and heavy eyeglasses. The police were also informed that the man wanted was a cartoonist. Detective McKeon went to the office of the newspaper where the artist named was employed and learned that he was on his vacation, and is living near Red Bank. Nothing further was done when it was found that Carr was out of the city.

Gene Carr, a humorist artist on the World, was married a few months ago and removed from his home in the Bronx to Red Bank. N. J. He is a native New Yorker and is only 27 years old. He is clean shaven and seldom wears eye glasses it is said.

At Red Bank Mrs. Gene Carr said that her husband had learned that there was a warrant for his arrest and had hurried to New York on the 9:57 train to straighten things out Mrs. Carr said that some one must have been using her husband’s name as he was at home on December 26th last, the date on which Cool was murdered. She said her husband had told her that he never heard of Rosalind Williams, Mrs. Craig or Mrs. Vallee.

Mrs. Carr. who was Mrs. Stiltman, a widow when she married the artist, owns a handsome country place in the town of Red Bank.

Detective McKeon found Mrs. Craig, late to-night and she accompanied the detective to the World office, where Gene Carr was in company with several detectives. After looking over the group Mrs. Craig declared Carr wasn’t the man. The Wilkes-Barre authorities will be notified.

In 1910, Carr and his wife resided in Middletown, New Jersey on Riverside Drive. His occupation was recorded as artist. The 1915 New York State Census listed cartoonist Carr, Helen and their daughter, Cleanthe, in Forest Hills, New York at 66 Tennis Place. Who’s Who said “…Carr is an enthusiastic golf and tennis player, and a collector of old London sporting prints.”

Carr signed his World War I draft card on September 12, 1918. His address was Room 56, Gardens Apartment, Forest Hills, New York. He was a newspaper artist for the New York World. The description said he was of medium height and build with gray eyes and brown hair.

The 1920 census recorded the Carrs in Forest Hills at the Gardens Apartment on Dartmouth Street. His occupation was caricaturist for a newspaper. The Newtown Register (Elmhurst, New York), October 1, 1921, said: “Gene Carr, well-known cartoonist, whose home was in the Gardens Apartments, moved last week to Manhattan.” 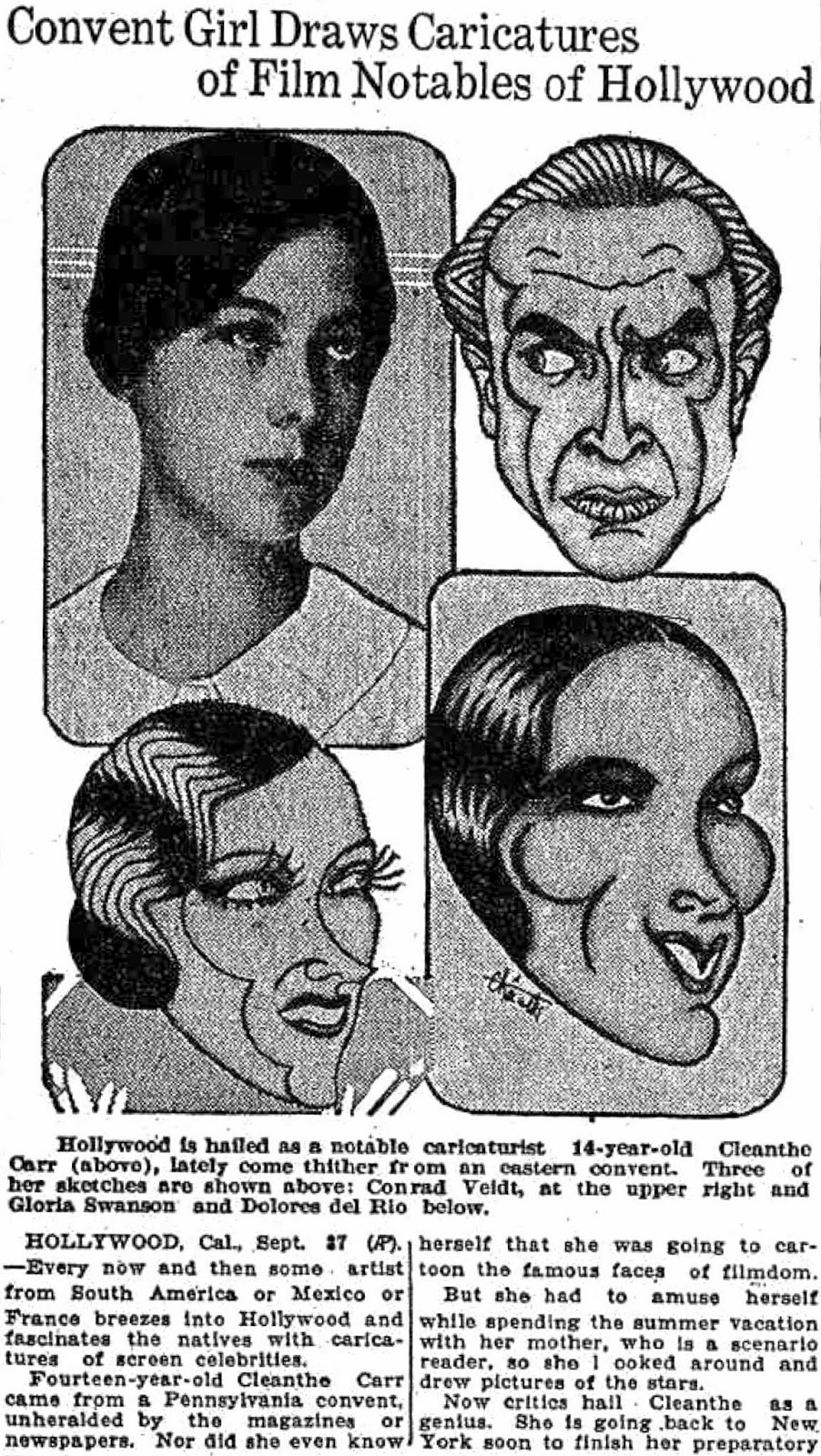 A collection of Carr’s Metropolitan Movies was published as Kid Kartoons in 1922.

Carr lived alone, according to the 1930 census, in Manhattan, New York City at 17 West 32nd Street. He was a magazine illustrator. In 1935, Carr created Here ’n There and Kitty Kelly, the Hollywood Extra which were syndicated by Van Tines Features, who also owned the copyright. 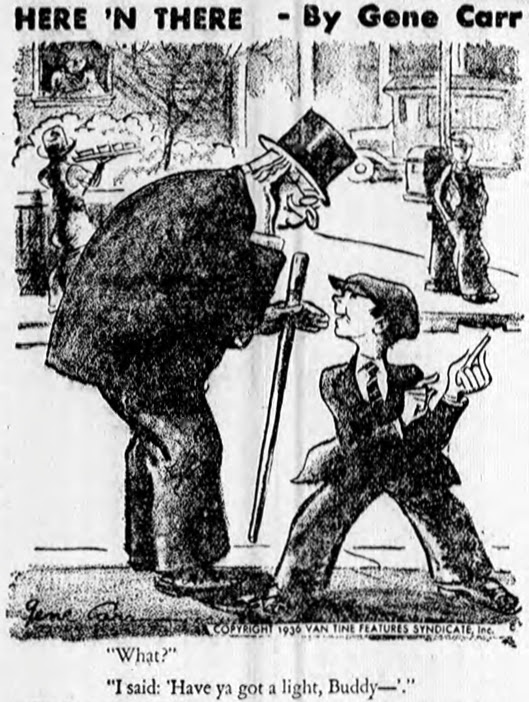 During its run, Kitty Kelly was re-titled Kitty Kelly and Nellie Shannon. At some point, an artist named “Ro” replaced Carr.

The 1940 census recorded Carr in Englewood, New Jersey at 143 Tenafly Road. His second wife was also named Helen; they had a 15-year-old son. Illustrator Carr’s education ended with the eighth grade.

In the 1950s, Carr resided in Vermont. The 1952 Bellows Falls city directory listing said he lived at 19 Westminster Terrace and worked as an illustrator/cartoonist at 3 Canal. The 1954 directory said his residence number was 29.

Carr passed away December 9, 1959, in Walpole, New Hampshire. His death was reported by the Associated Press the following day in the Nashua Telegraph.


Walpole, Dec. 10—Gene Carr, 78, cartoonist who created some of the best known humor characters in the early part of the century, died last night after a brief illness.

Carr, who never studied art formally, was born in New York and worked for newspapers there and in Philadelphia. He also contributed humor cartoons to national magazines.

Among the characters and cartoons he created were “Lady Bountiful,” “All the Comforts of Home,” “The Prodigal Son,” and “Metropolitan Movies” which ran in the old New York World for many years.

Carr is survived by his second wife, Helen, to whom he was married in 1937, and by a daughter, Cleanthe, of Hollywood, Calif., by his first marriage.

Comments:
I bout a 11x141/2" Sketch E Carr signed at a Salvation Army Humorous a old man casting a fishing line in his bedroom has 2 fishing hooks in the frame if anyone knows value let me know thanks