Obscurity of the Day: Dolly Doo Does Her Dad 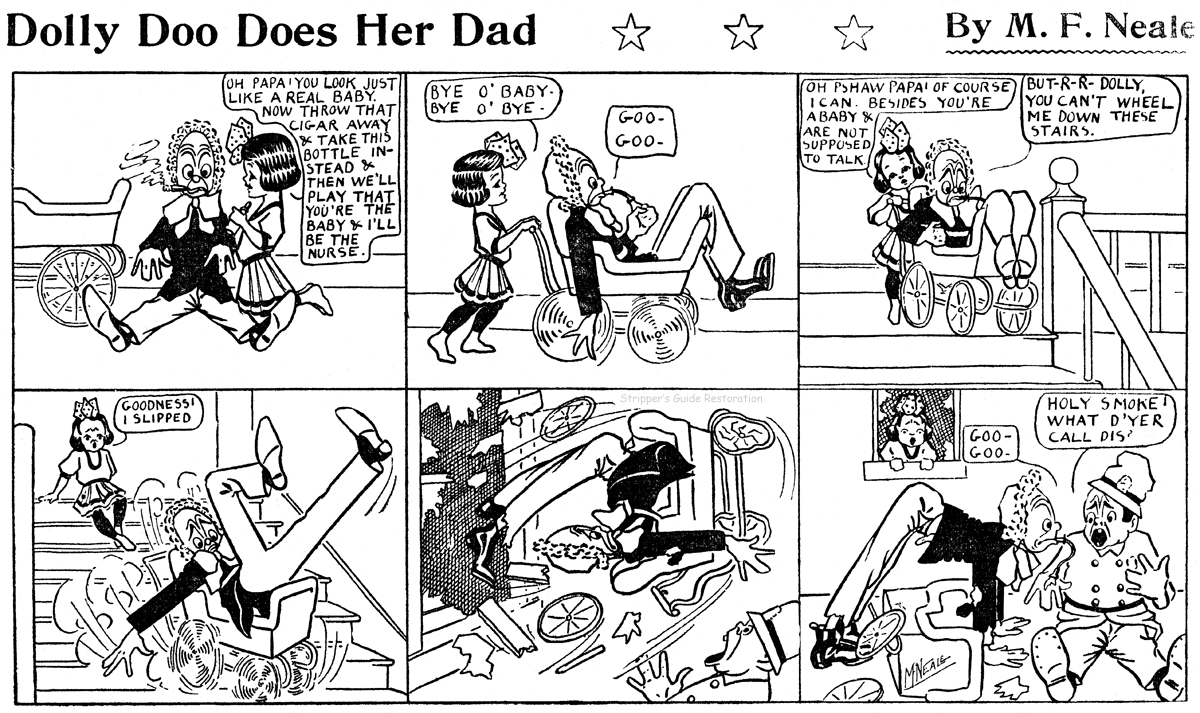 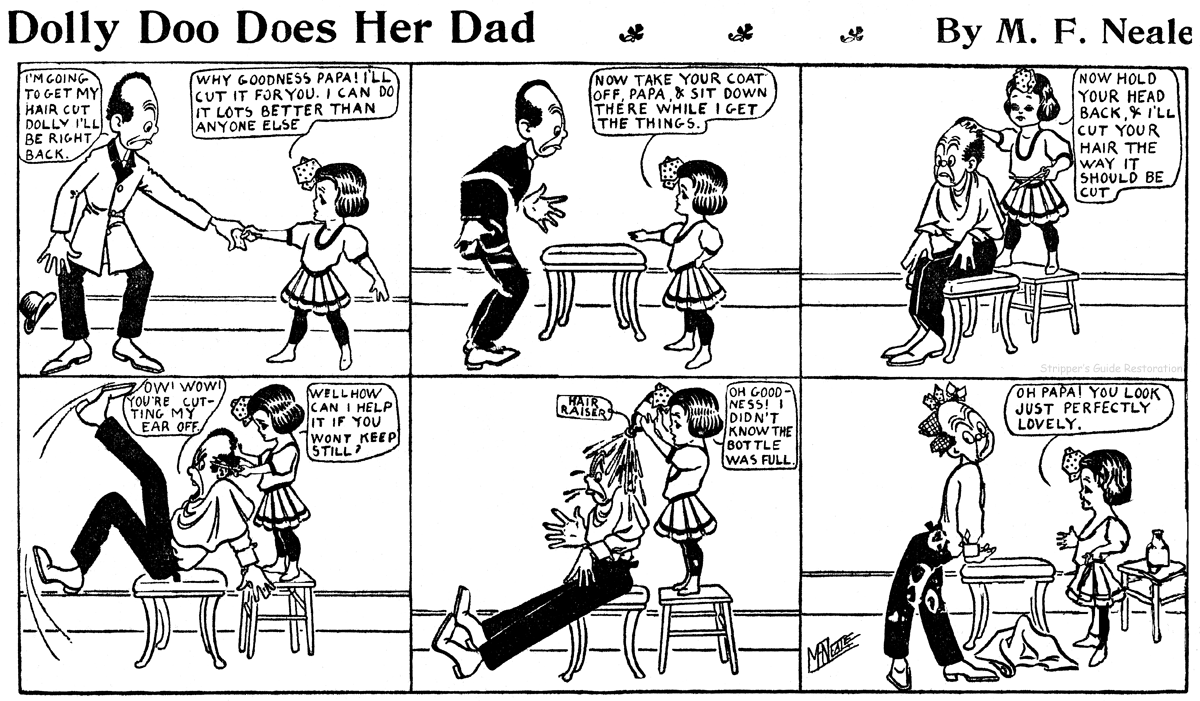 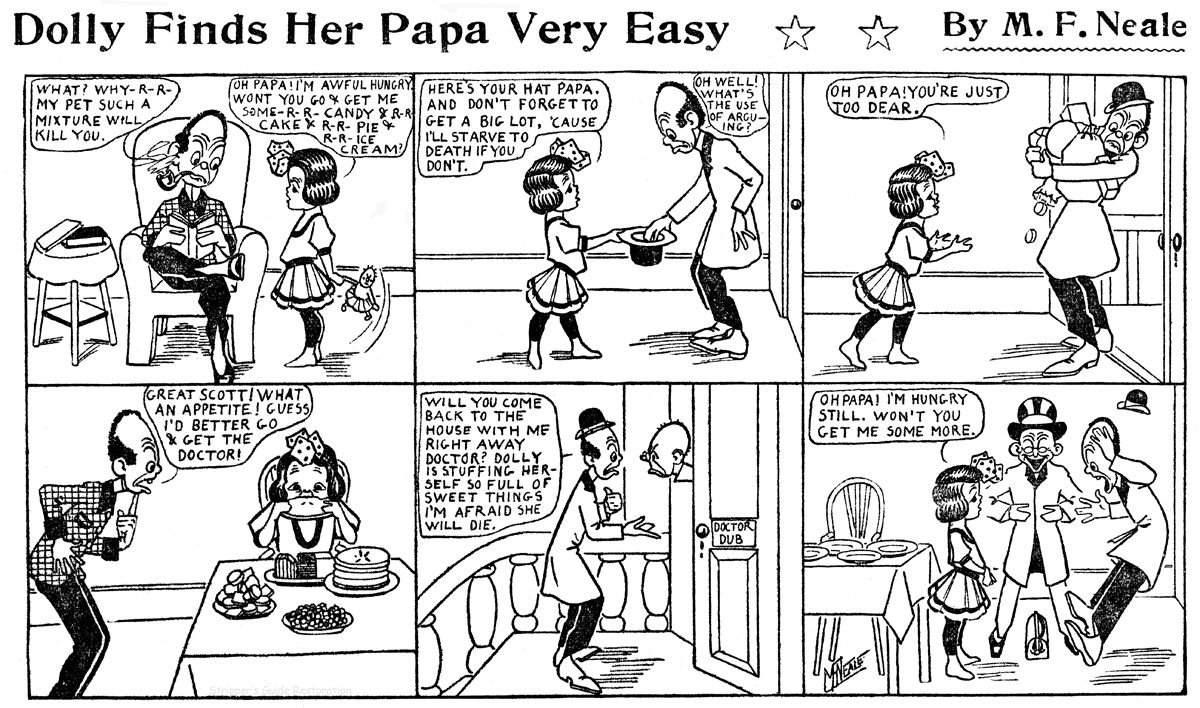 Y'know, when I'm confronted with a title like this, it is awfully hard to keep my mind out of the gutter, and make some snide comment about how there was a movie by the same name very popular in the Times Square theatres of the mid-1970s.

I mean, what kind of sicko pervert brain must I have to land there. After all, this lovely little series by M.F. Neale, which ran three times in the New York Evening World from March 12 to April 9 1908, is a model of innocent fun. Here we have daddy and his curiously grown-up looking little girl, no mother anywhere in evidence, and this little darling girl is just doted on by her loving papa. He loves her so much, in fact, that he'll submit to any domination she pleases. In fact, he seems to revel in any humiliation she can think up, including dressing him up like a baby and taking him out in public. Does papa get mad? Of course not. He must keep playing the baby role until his mistress, I mean his daughter, tells him otherwise. What a wonderful docile and well-trained papa. He is a willing and happy slave to her every whim. What a heartwarming example Mr. Neale has given us of innocent familial bliss.

I want to apologize to you, dear readers, for my behavior. I'm a bad boy for having expressed such awful thoughts. I really should be severely dressed down for my transgression. Perhaps even corporal punishment is necessary to set me back on the straight and narrow path ...

Comments:
My Great Uncle was Eric Gustav Michelson, who was born in Boston, Mass., in 1893. His parents were from Sweden. He was married to Hester ne Cowan, in Los Angeles in 1919.
As an artist and graphic artist, he studied at the Boston Normal Art School, the Vesper Georges School and studied painting under Hanson Puthuff. He attended Industrial Design under Joe Sinel, Posters under Prof. Glass (Munich) At one time had a permanent exhibit at West Point and New Delhi. He also worked for the Army and I believe the Corps of Engineers.
I'm only listing a partial list of his accomplishments as we are compiling a more comprehensive biography. He died in Paradise, CA in 1977. The family has several of his prints and paintings. My father, Ralph, lived with them after his mother passed. She had four sons, and my dad went to California (From Worcester, Mass)with "Uncle" Eric.
"Rick" Michelson (San Diego)