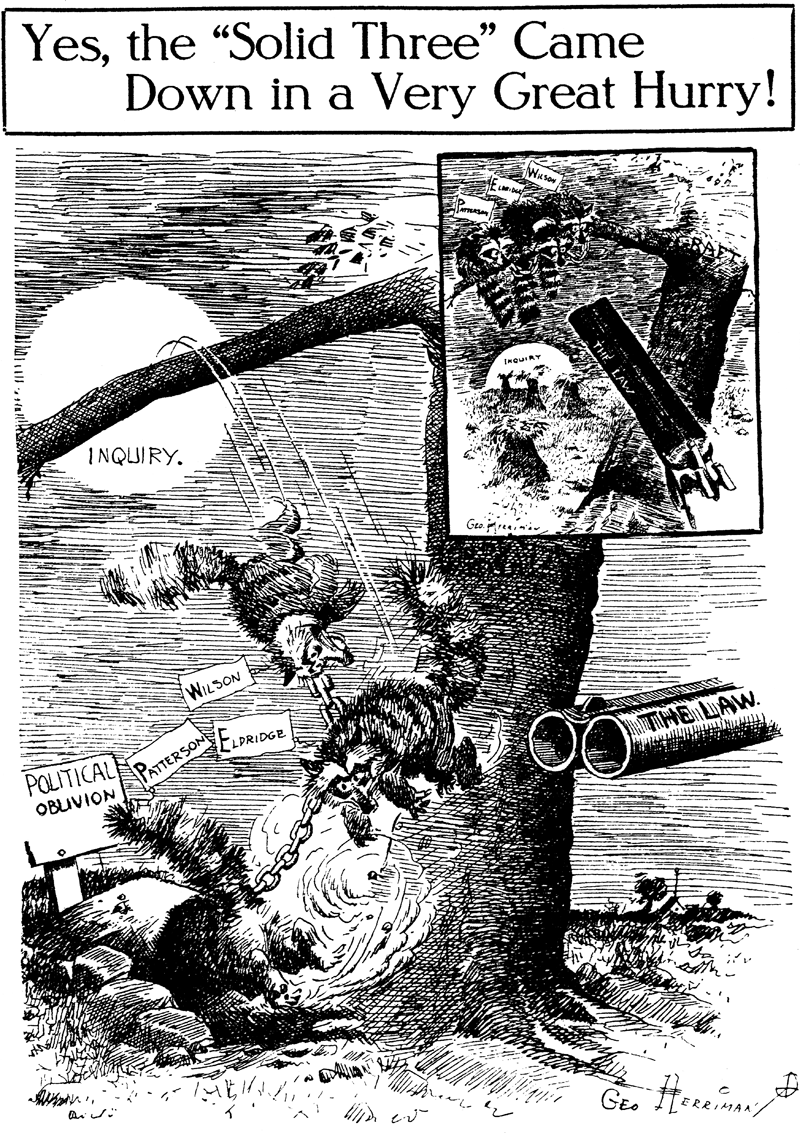 Friday, September 11 1908 -- A front page cartoon from Herriman, and in a vignette shows his previous cartoon about the "Solid Three".

County commissioners Patterson, Eldridge and Wilson, dubbed the "Solid Three", put together a bond issue for the county and sold it off, probably to favored friends, at a high interest rate. They did this without proper public meetings and without going through the normal channels to determine a fair interest rate. On discovering this breach of the public trust, Angelenos were, not too surprisingly, up in arms. 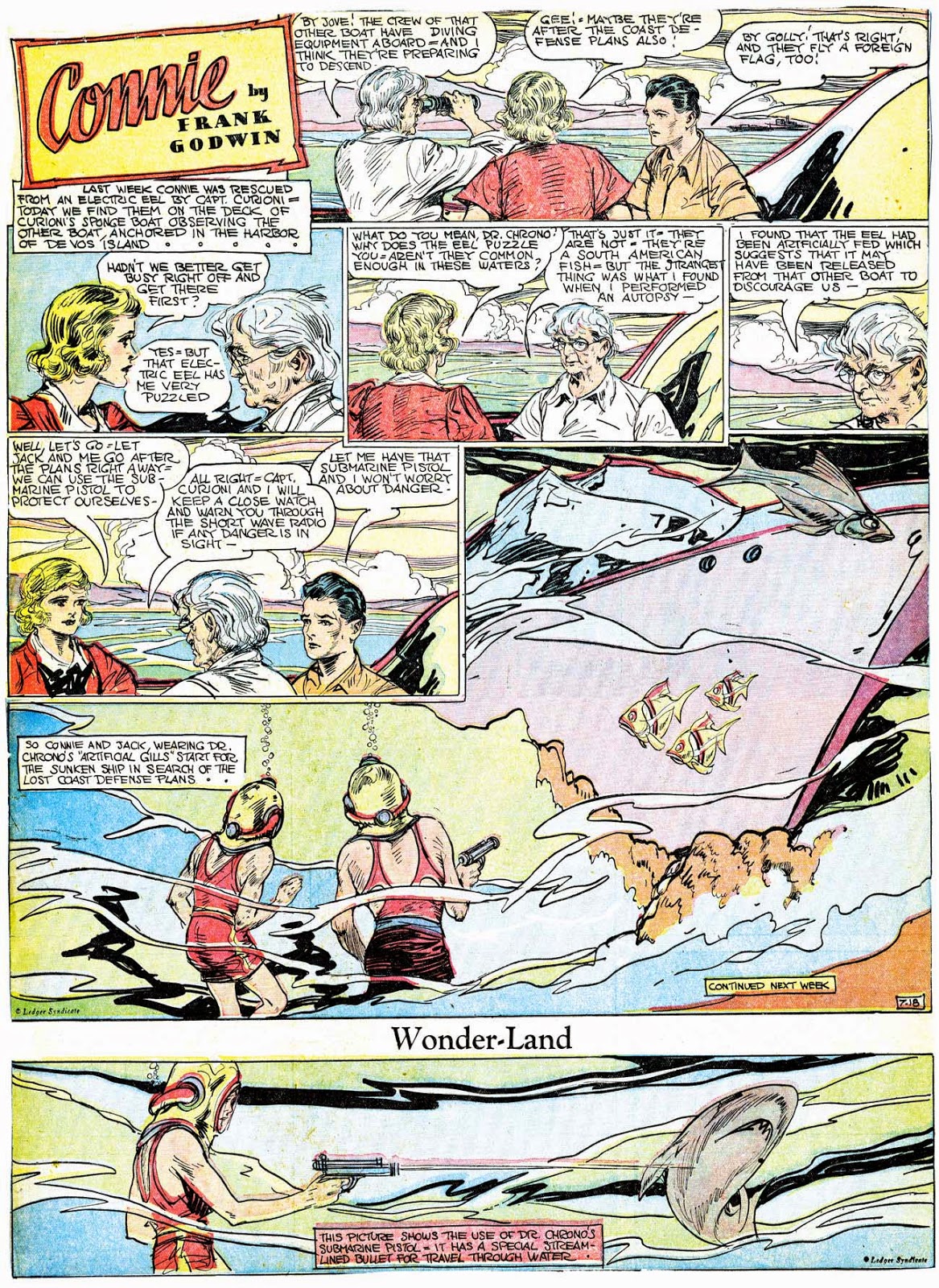 Today we have a mystery feature, sent in by comics sleuth Mark Johnson. He tracked down Chatter by Doc Duck in at least three newspapers, the Buffalo Courier, Mt. Vernon Argus and the Portsmouth (OH) Daily Times. The running dates he found for this daily panel are from November 10 1913 to December 20 1914.

Now I generally have a rule that if a feature isn't signed and no syndicate is credited, as is the case here, I figure that if the creators cared that little, why should I? But look at the art on this feature! Wow, it is delightful. It looks to me like it just might be the work of Walt Kuhn, who loved cartooning birds when he wasn't making hoity-toity modernist paintings.

What do you think? Is it Walt Kuhn or someone else? And does anyone have any ideas on tracking down the syndicate that distributed this? Was it Life Publishing, perhaps, who earlier syndicated Kuhn's Funny Birds? Got any earlier or later running dates?


PS -- Be sure to watch the American Experience program "Ripley: Believe It or Not", airing at 9 PM on January 6 on most PBS stations. Check it out at their website.

I think Kuhn is a good guess.

Hello Allan- I notice that above, you mention Funnybirds by Kuhn, but you don't have a posting for it. If you ever do, I have spotted it running in the Meriden Morning Record from 20 May to 23 November 1912. It is replaced by titleless gags until 14 December by misceleneous artists like Crawford, Mayer,Sullivant, Robt. L. Dickey, etc. But these all have the copyright line Chas. Scribners sons.

It is replaced on 16 December with what is more or less a clone of the Funnybirds, "The Feathers Family" by Bob Addams. It lasts until 18 January 1913.It has no copyright line, and captions are drawn by the artist, making it look like a self-syndication item. It would seem possible that the Addams panel was created to directly compete with "Funnybirds."
Looking at these, I now think maybe, despite you and Cole's opinions, "Chatter By Doc Duck" might be by Addams and not Kuhn.
Sad to notice that's Cole's input was one of his last acts on this plane, but he enjoyed debates where we'd guess the artist.

Hi Mark --
For my book I considered The Feathers Family to be a continuation of Funny Birds, since there was only a ten day gap of miscellany between them and they were both syndicated by Life Publishing. You'll find a more complete run of the whole series in the Brooklyn Eagle. 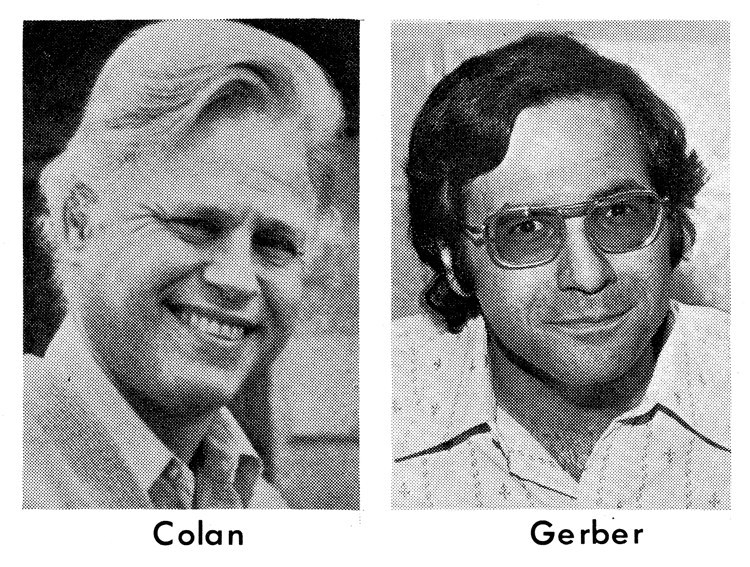 "Howard The Duck" is the June entry into the newspaper comics arena as a daily and Sunday superduck. Howard is a star of Marvel Comic Group's heroes and is being presented in newspapers by the Register and Tribune Syndicate. In 15 months, he has become one of the hottest selling personalities in the Marvel group books.

The men behind Howard The Duck are Steve Gerber and Gene Colan. Gerber, whose work experience prior to joining Marvel Comics in 1972 included stints as a teacher, ad copywriter, car salesman, a radio announcer and a columnist for an underground newspaper, graduated from Saint Louis University in 1969 with a radio-television-film major. He says he was raised on Ralston, Twinkies, Warner Brothers' cartoons, and ", . . hamburgers, bagels, Toll House cookies, and Marvel Comics. If it's true that we are what we eat, my creation of Howard The Duck was not only logical, it was inevitable."

Gene Colan, the artist for Howard, attended Art Students League of New York, and two years with the Air Force found Colan in the Philippines where he drew for the Manila Times. Back in the U.S., he found a job with the Marvel Comics Group and has been intermittently associated with them for 20 years.

One description of Howard as a cigar-smoking, wise-quacking cartoon character says he's "so human that in times of crisis he's out to save his own tail feathers." And another is that the fearless, feathered fury indulges in sarcasm and social comments that are far from ducky.

Comments:
Thanks for this vintage article. Coincidentally, I just finished updating the newspaper listings at my Howard the Duck site:
http://nemsworld.com/howard/
If anyone can provide further newspaper titles that carried the duck, please speak up. I figure there are about 50+ newspapers yet to be identified.

Obscurity of the Day: A Musiversicle -- Try It on Your Piano

Musical comic strips (that is, strips in which a few lines of a song are offered) have been tried on occasion, rarely with any great success. Without a doubt, the longest-running strip of this type was Them Days is Gone Forever by Al Posen, but even that probably qualifies as a borderline obscurity.

I don't know if Mr. Holden counted himself primarily as a songwriter or a cartoonist, but I can say that as far as I know, this was his sole contribution to the world of newspaper strips. A pity, as he had a pretty appealing style. 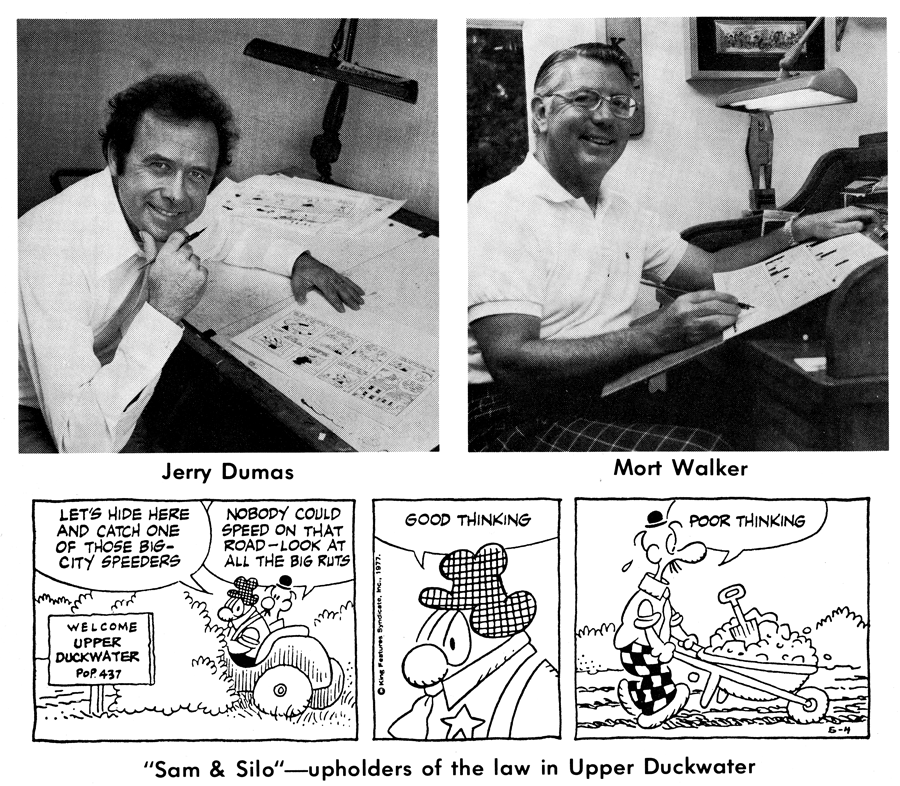 Mort Walker, the most prolific creator of comic strips in the past 25 years with three current successes in syndication around the world, is teaming with his longtime collaborator Jerry Dumas for a new strip based on Keystone Cop-type antics of a small town sheriff and his deputy.

The new strip titled for its main characters "Sam & Silo" premiered April 18 in over 100 newspapers from King Features.

Prior to the debut of "Sam & Silo," Walker was the only cartoonist who has three successful strips syndicated— "Beetle Bailey," "Hi •& Lois" and "Boner's Ark"—appearing in nearly 2,500 newspapers around the world.

Because of his cartoon output, Walker long ago organized a "laugh factory" in Greenwich, Connecticut where he collaborates with Dumas, Bob Gustafson, Ralston Jones and Dik Browne, creator of "Hagar the Horrible."

Founds museum
Walker writes children's books, has designed games and furniture and in 1975 Mason/Charter published a study of cartooning, "Backstage at the Strips." During recent years, the cartoonist has spent considerable time and money getting the Museum of Cartoon Art founded in Greenwich.

Dumas has worked with Walker for almost 22 years. His writing and drawings appear frequently in The New Yorker.

The new daily and Sunday strip draws on the small town background of both Dumas and Walker. J. F. D'Angelo, King Features president, says, "This is an uncomplicated strip and its chief asset is humor. That's what a real comic should be—funny."

Comedy relief
The cartoonists say they feel readers want "a little relief from super-sophisticated comics that comment constantly on politics." They set the new strip in the town Upper Duckwater (pop. 437) and concentrate mainly on capers of the sheriff, Sam, and his deputy, Silo. They aim to create "old time humor in an old town setting" and to be "just plain funny." Dumas says that "Upper Duckwater is a combination of every village and town I've ever been in love with."

Of Sam and Silo, Walker explains, "It's a case of double stupidity and together they really foul things up." Dumas adds, "Deep down Sam and Silo are nice guys. Mort and I like both characters; if we didn't like them our readers wouldn't either."

Comments:
Interesting they doesn't mention it continues the characters from "Sam's Strip".