Obscurity of the Day: He Has a Good Friend in Johnnie Queerim 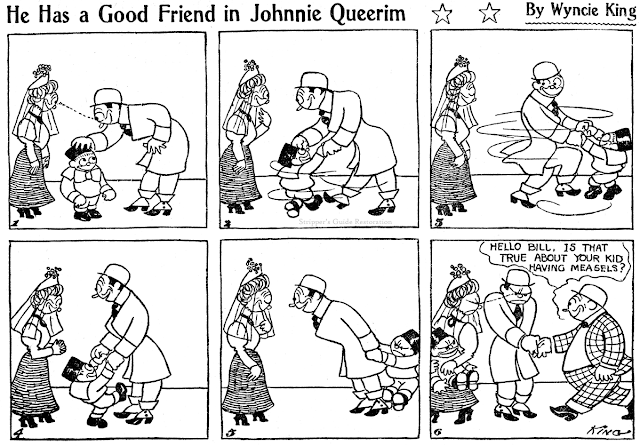 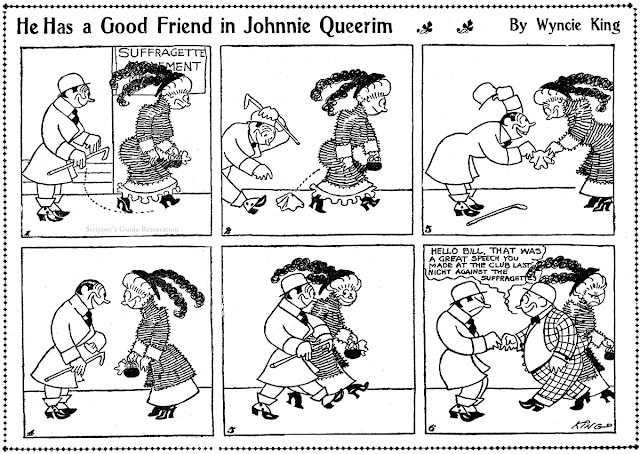 With an eye-catching title like He Has a Good Friend in Johnnie Queerim, you've got to be just a  tiny bit disappointed when you realize that this strip is just about some schmuck named Bill, who gets inadvertently ratted out by his buddy Johnnie Queerim every time he's got some little scheme cooking.

Did we really expect this 1908 series to be about a committed non-traditional relationship between our two stars? Okay, no, not really. In fact according to an etymological dictionary, the use of 'queer' in that sense was first recorded not until 1922, so the cartoonist probably wasn't even expecting readers to do a double-take on that title.

Wyncie King, the cartoonist of today's obscurity, penned the strip for the New York Evening World from January 31 to March 17 1908, with a total of only five episodes printed in that interval. Though Mr. King had a long cartooning career, much of it at Louisville papers, this is as far as I know his only newspaper comic strip series.

Comments:
I always thought Mutt and Jeff were more than friends!

"Queer" is also a verb meaning to sabotage, as in "Don't queer the deal"--hence its use here.