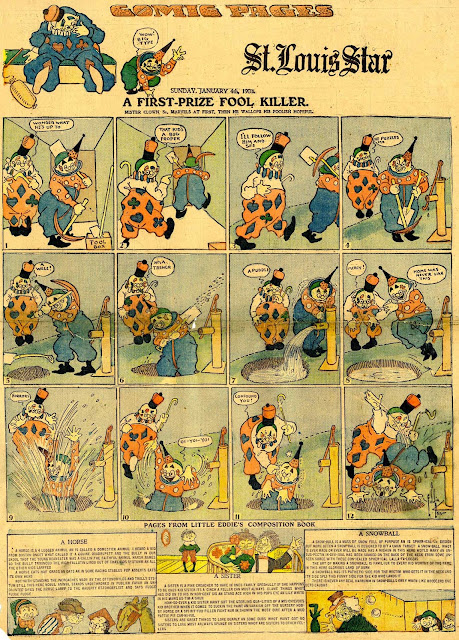 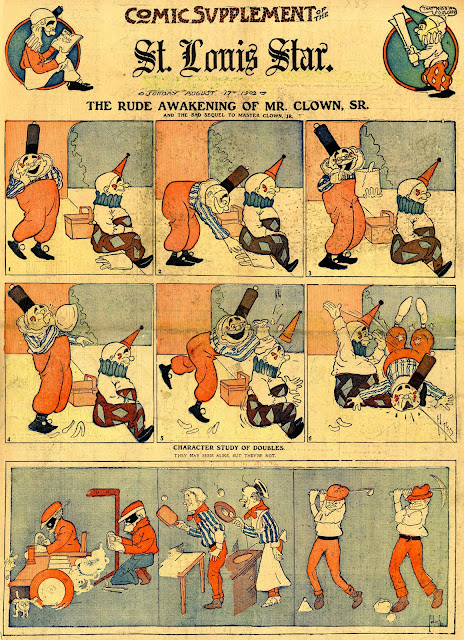 Here's a series loosely called Mr. Clown Sr. and Master Clown Jr, by that amazingly odd cartoonist Eddie Eksergian. This is a particularly unfunny series, even by Eddie Eks standards. I can't even tell which character is supposed to be which, not that it would help the gags along anyway. Thankfully these couple of pages aren't a complete loss for the Eddie Eks aficionado, as the masthead on the top example is vintage Eks -- "Wow! Big Type". Now that is the sort of meta-weirdness that makes our boy's work worth perusing.

The strip appeared in the St. Louis Star from August 17 1902 to January 4 1903, and then one last time on February 1 1903, this time signed by one G.V.H. rather than Eddie Eks. Who that might be I haven't a clue, but it's hard to imagine someone wanting to filch a series title from Eddie Eks, so he probably had some screws loose himself.

Comments:
I can't imagine that even in 1902 this was amusing! It's ugly and baffling...

Always great to see more of Eddie Eksergian's work. Lavish paintings by his father and uncle sometimes show up in online auctions.