Obscurity of the Day: The Up-To-Date Uncle Tom's Cabin Company 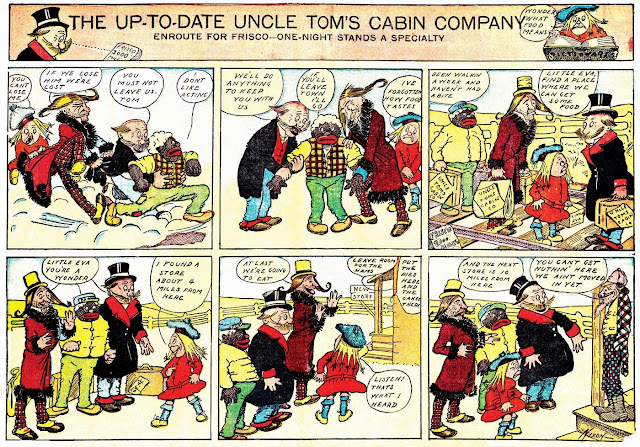 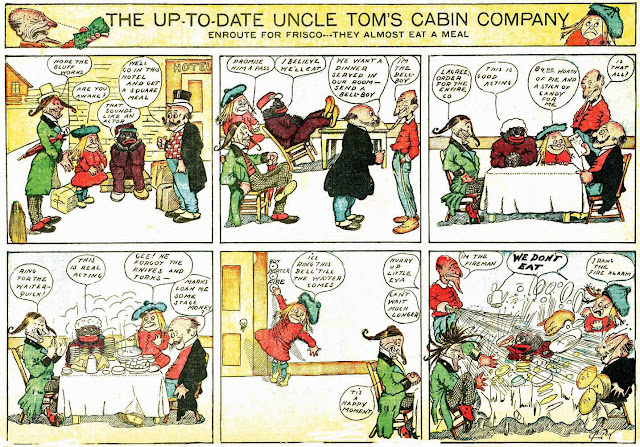 In 1905, when World Color Printing's boilerplate color comics section was becoming a very popular option for medium-sized newspapers -- those too poor to have color presses or to purchase the higher end products from Pulitzer or Hearst -- a promising newcomer named Nixon came onto the scene. No, no, not that fellow who could find Commies under every bed in America, but a looney-toon of a different stripe who submitted some very wacky comic strips to the growing syndicate.

The Up-To-Date Uncle Tom's Cabin Company follows the harrowing story of a two-bit troupe of actors trying to get from the east coast to San Francisco, where they hope to play a gig. The troupe apparently limits their repertoire to stage adaptations of Harriet Beecher Stowe's classic novel, and so they travel with a black actor to play the title role, and a young girl (maybe a midget?) to play the angelic Little Eva. They haven't a cent to their name, so transportation is by foot, food is as scarce as finding a free meal, and perhaps worst of all, the star of the show does not want to be an actor and is constantly trying to escape.

Mr. Nixon's cartooning and writing skills are certainly in their awkward teenaged years here, but he shows an innate if somewhat primitive genius for the form. I have little doubt that if he had stuck to newspaper cartooning, he would have produced a lot of memorably crazy material in an era when that sort of thing was welcomed in the funnies section.

The Up-To-Date Uncle Tom's Cabin Company ran in the WCP comic sections of February 26 to April 2 1905.

Thanks to our late benefactor Cole Johnson, who supplied the scans.

Comments:
Another one of those early comics in which the balloons read right to left.