Obscurity of the Day: Obadiah Fry 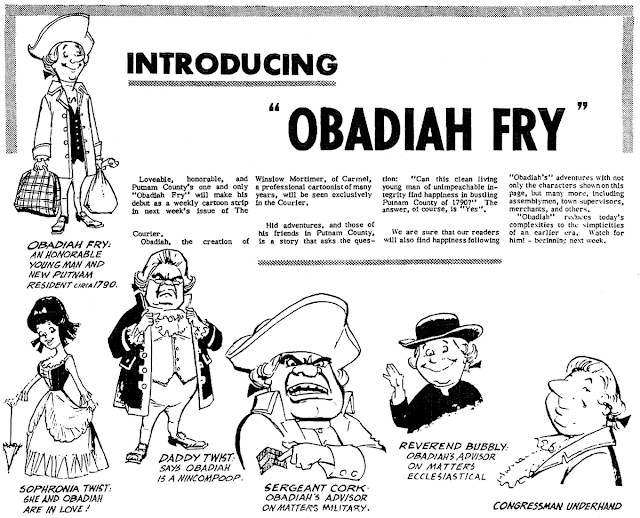 Thanks to the dedicated sleuthing of Mr. Alex Jay on that fershlugginer Fulton County Postcards website, we bring to you today a neat obscurity by a well-regarded newspaper and prolific comic book artist, Win Mortimer.

Mortimer was a busy bee, working for both Marvel and DC comics in the early 1970s, but somehow found the time to also create a weekly comic strip for the Putnam County (NY) Courier. The strip Obadiah Fry was set in colonial America and starred a little fellow with daringly modern ideas. The strip mixed a 1970 sensibility with the world of 1790, and the result was actually pretty good, especially considering this was a cartoonist who was not, as far as I know, generally known for his comedic ability.

I could definitely see Mortimer submitting material like this to Crazy or Cracked and easily making the sale. Since Mortimer was an old hand with syndicated comic strips at this point in his career, I imagine he submitted this strip to the syndicates and was turned down. I find that at least a little surprising, as the syndicates were really interested in colonial America at this time, what with the bicentennial coming up. Several strips on that theme sold, and I don't think they had quite the panache of this one.

With Mortimer's heavy workload you'd think that Obadiah Fry would have been a short-term experiment. However, the strip began appearing in the Courier on August 11 1971, and was still running at the end of 1975, when the Fulton website runs out of the paper. When they resume their run in July 1978, the strip has disappeared. My guess is that the strip probably ended shortly after the bicentennial, when the whole country was thoroughly overdosed on this colonial stuff. That means that the strip would have had an impressive five year run, a long time even for a weekly.

Thanks to Alex Jay for finding the strip and sending me a big batch of PDF samples!