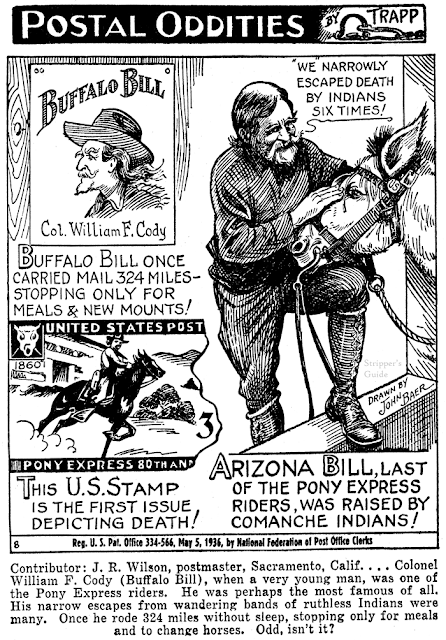 I've lately heard vague rumblings from Tom Heintjes that lead me to believe that Hogan's Alley #20 is to be published soon. And soon, on the Hogans' Alley schedule, should mean sometime before the next presidential election. Well, good things come to those who wait. And wait. And wait.

When issue #20 of that fantabulous magazine is published, you'll be regaled by, among other lesser material, my article about the many imitators of Robert Ripley's Believe It or Not. My favorite Ripley imitators are the advertising and public service rip-offs, and you'll get a heapin' helpin' of those for sure. And here's one to wet your whistle.

Postal Oddities was a Believe It or Not imitator whose subject was limited to post office-related matters. Why would a newspaper run a feature of such limited interest, you ask? The answer is simple. It was offered free to newspapers by the National Federation of Post Office Clerks. Tougher question is why the N.F.O.P.O.C. (whew!) felt the need to produce and distribute it. The fact is that many organizations considered it good public relations to produce features like this, and they're not at all uncommon to find in newspapers, mostly of the 1930s to 1950s. These freebies were a real boon to small weekly and rural papers, which used these things to flesh out their issues and provide some much needed graphic interest.

Postal Oddities took a strange circuitous route to the newspaper. It began in a post office clerk trade publication, and was then picked up, believe it or not, as a surprisingly popular radio show. After that, the panel was revived and offered to newspapers from 1937 to about 1945 (freebies like these are nearly impossible to assign definitive start and end dates, as they could sit in an editor's slush pile for years).

The panels were copyrighted 1936 throughout, but that copyright seems to refer to the year the radio show was airing, because I have never seen a sample of this feature appearing in papers earlier than 1937. Earlier panels have a long text piece (see top two samples), but later the text content was slashed way back (bottom sample). The panels were also numbered, though most papers routed that out, and my impression is that the numbering doesn't really mean much anyway.

Postal Oddities was produced by writer Trapp (gotta love the graphic by his credit) and cartoonist John Baer. I'll leave their interesting stories to the capable hands of Alex Jay, whose Ink-Slinger Profiles of them will appear in coming days.

Comments:
I've read that Ripley made up a lot of his items...wonder if the honorable postal clerks did, too?

For many years, Baer drew a tepid editorial cartoon for a bland monthly union newspaper called Labor. It was anything but a radical paper, at least not in the sixties when I remember it.
It was aimed at a family readership, and Baer's creaky style was the object of derision. Elsewhere a column of jokes, the stock of which hadn't been replenished in decades, had gags featuring ice men and "speed Cops" catching "scorchers" going forty miles an hour.
You'd get it free if you belonged to the union, and worth every cent.