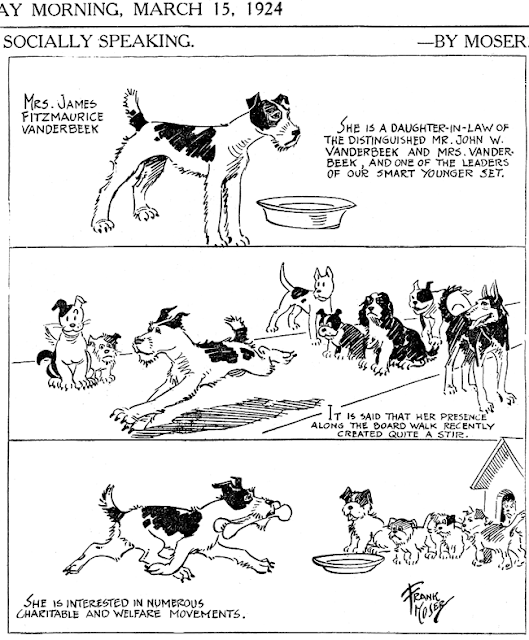 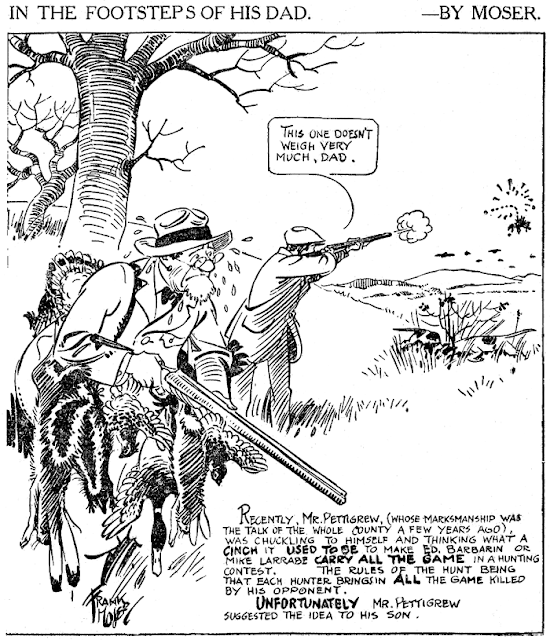 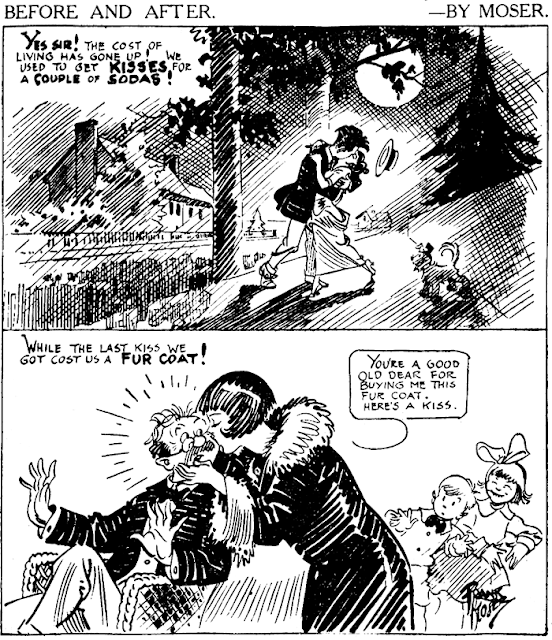 I previously posted about this subject in 2013; this post represents new information gathered since.

Frank Moser, much better known as an animator than a newspaper cartoonist, got his start in newspaper cartooning, and tried to go back to it several times. His last known attempt seems to have been an untitled series he penned for Associated Newspapers in 1924. The series, if it really is one, is so obscure that I have never once found a newspaper that ran it on anything like a consistent basis, and hence for years I haven't been sure if it was an actual series or just an occasional feature. When Cole Johnson sent me some sample scans (above) and suggested I look into the matter a few years ago, I gave it the ol' college try but came up pretty dry.

There is conflicting information about the series from secondary sources. Here is an announcement that ran in Cartoons Magazine in April 1924:


That sounds like a bona fide series. But here are the Editor & Publisher syndicate directory listings for an Associated Newspapers offering:

1924: Cartoons (Human Interest) (no frequency or size given) -- Fields, Moser, Terry, Scar, and others

This listing sequence certainly seems to speak to a very loosely defined series, perhaps even one in which freelance cartoonists submit cartoons in hope of making individual sales. Thankfully, the inclusion of Robert Ripley's name helps us out a lot. We know that his well-researched career was at low ebb in these years, and he was contributing to the Associated Newspapers on a less than daily basis. So now things are starting to gel. Evidently there was not a Frank Moser cartoon series per se despite the article in Cartoons magazine, but he was a regular contributor to a multi-creator series.

That information sends me back to the (virtual) microfilm, and I finally find what I need in the 1925 issues of the Hamilton Journal-News. Starting from a single Frank Moser search hit, pointing to a cartoon appearing on their editorial page, I start looking at the editorial pages for surrounding dates, and what do I find but cartoons by Ripley, Fields, Sid Greene and Scar appearing there in the same space every weekday.

The cartoons are of the human interest variety, as advertised, and also what I would call 'editorial lite'. What I mean is cartoons that appear to be editorial in nature, but are so general and unpointed that they can run in any paper at any time -- like complaining that Washington is a sea of red tape or that taxes are too high.

Before October 1924, the Journal-News unfortunately was only running cartoons from this series occasionally. They also ran more topical editorial cartoons from Cargill, Bushnell and others, and only used the Associated Newspaper 'human interest' crew when they felt like it. However, by looking around for instances of the series, I find Moser and Terry cartoons all the way back to 1923, and I can locate Fields cartoons back into 1922. Cole Johnson mentioned finding Moser and Terry cartoons in the Boston Evening Globe in 1922. I also find a regular contributor to the series named Dewey in 1924 -- I guess he was the 'etc' in the E&P creator list. Dewey's style sure looks a lot like Art Helfant to me.

I also find that creator Terry turns out not to be Moser's fellow animator Paul Terry as I would have guessed, but his brother John (later creator of the comic strip Scorchy Smith). I confess I do not know who the Fields chap is, though his work is decent.

In what I reviewed of the late 1924 series, when the Journal-News started using it consistently, it seems that Moser, Fields and Dewey are offering the lion's share of the cartoons, with occasional appearances by Scar and Terry. In 1925, Ripley starts contributing but he certainly doesn't appear at the high frequency I might have assumed. By 1926, the Journal-News has lost interest in the series, and rarely uses it after mid-year. I tried finding another paper that ran the series consistently, but I had no luck.

So, there you have it. An untitled series with an inconsistent list of creators, that was offered on a daily basis but rarely run that way by any newspaper. I suppose I do now have enough information about the series to include it in my listings, but just barely! I have to believe now that the announcement in Cartoons magazine, though, is a red herring -- maybe Moser was just trying to drum up some publicity for the ongoing series to which he contributed.