Obscurity of the Day: Mama's Darlings 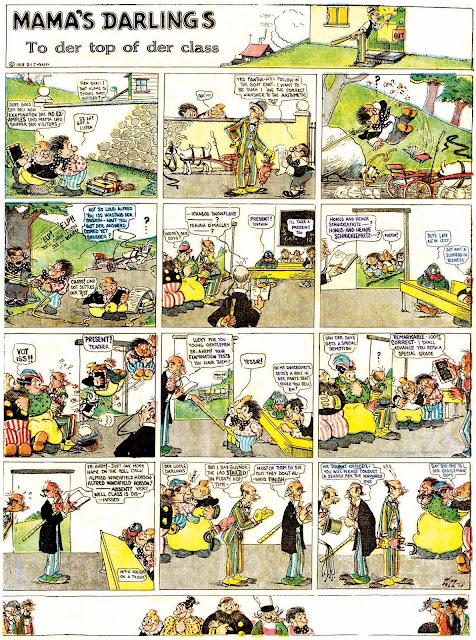 Despite a large field of competitors, I think Mama's Darlings may well take the prize for Most Blatant Rip-Off of the Katzenjammer Kids (I disqualify Captain and the Kids from the running since it is by the creator of the Katzies). Creator Oscar Hitt, who penned this series for the Chicago Herald's J. Keeley Syndicate, has made no other attempt to make his series differ from the original model except to rename the players -- surely naming the kids Honus and Heine Schnicklefritz will throw anyone off the scent, right?

Hitt certainly had the qualifications to produce this faked up version of The  Katzenjammer Kids. He was, in fact, drawing the real Katzies at the same time! Hitt was in charge of the short-lived daily version of that strip, which ran in very few papers from 1917-1919. In fact, Oscar Hitt did such a great job of drawing both real and fake Katzies that he later got the job of ghosting art for Rudolph Dirks on Captain and the Kids in the 1920s. Proves there's even a happy ending to plagiarism sometimes.

Mama's Darlings appeared in the Chicago Herald Sunday comics sections from June 24 1917 to April 28 1918. The strips were later sold in reprints to a few backwater papers by an unknown syndicate.