Obscurity of the Day: Raffles and Bunny the Amateur Cracksmen 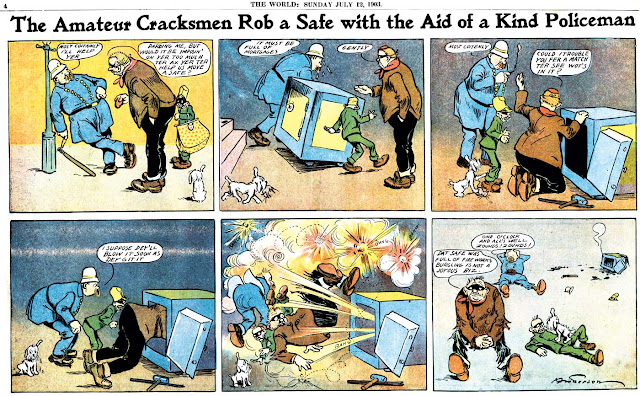 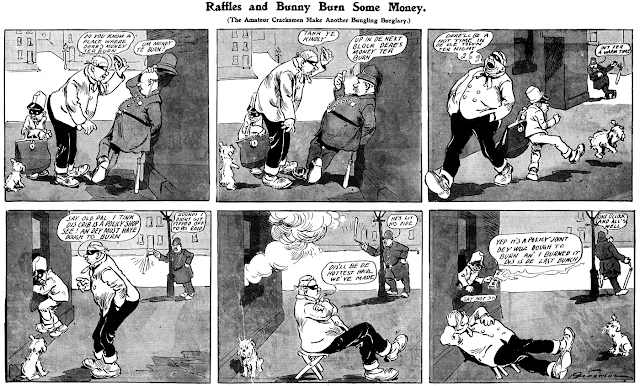 Here's an interesting feature from Carl Anderson, who is better known as the creator of Henry, much much later in his career.

In the late 1890s there was a highly popular series of stories published about a British burglar and safe-cracker named Raffles, whose adventures were supposedly chronicled by his pal Bunny. Raffles and Bunny were the creation of E.W. Hornung, who came up with them as a sort of photographic negative of his brother-in-law Arthur Conan Doyle's literary creation, Sherlock Holmes and Watson.

Why Carl Anderson felt it was within his rights to appropriate the names of these popular characters for a 1903 strip series about a couple of thuggish Brooklynites is anyone's guess, but steal them he did. The New York World seems to have not batted an eye over the misappropriation either.

The strips feature the dim-witted duo plus an even more brain-dead cop who aids and abets them in their criminal activities. A cute dog is the final character, his sole role apparently to get kicked by Bunny in each strip.

A bit of interesting slang in evidence here -- I had no idea that "crib" as a reference to a home was this old, but a trip to the dictionary reveals that usage dating back to the early 19th century. A "policy house" is a betting parlor, specifically one in which numbers games are the feature attraction.

Raffles and Bunny the Amateur Cracksmen ran in the New York World's Funny Side comic section from February 15 to October 4 1903.