Obscurity of the Day: Adventures of a Bad Half-Dollar 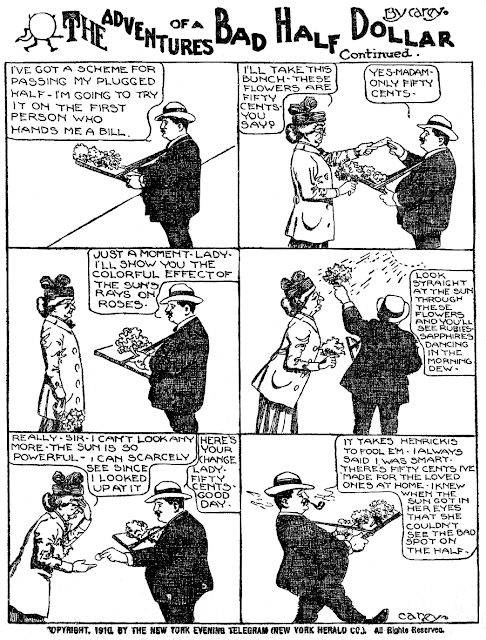 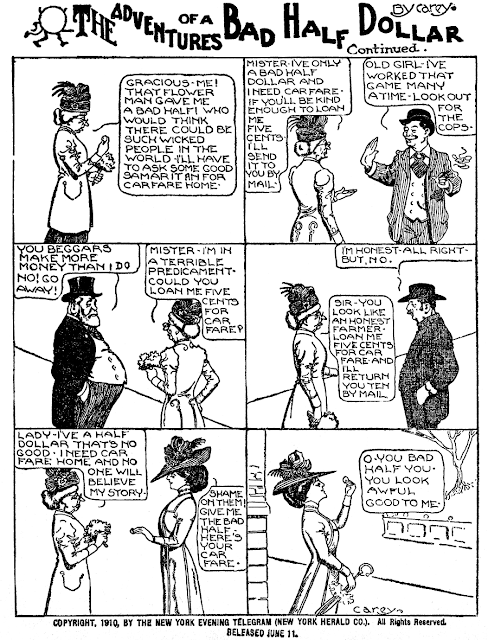 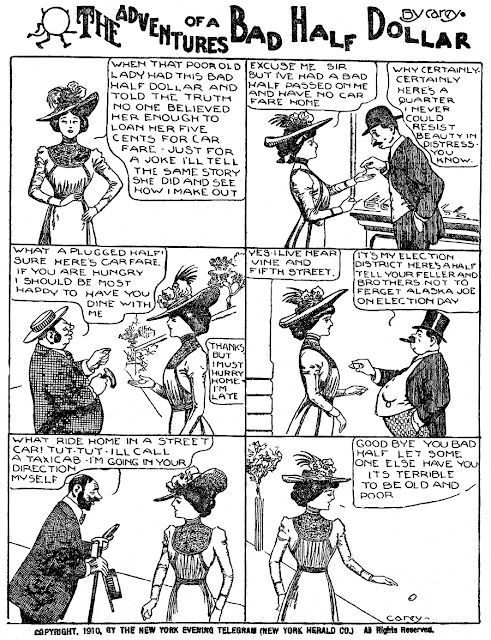 Here's a superb series from the accomplished cartooning pen of Ed Carey, titled Adventures of a Bad Half Dollar. This continuing series, rather than featuring a human star, instead traces the comings and goings of a counterfeit coin. Carey uses this framework to explore with a jaundiced eye the many shortcomings of humanity, and boy does he have us pegged as a bunch of miserable, self-serving, egocentric, hypocritical schmucks. Spot on, in other words!

While you may think the idea seems sorta neat but extremely limited, Ed Carey was able to dream up all sorts of interesting situations and personality types to be saddled with the bum coin. The best part, though, is that he made it a true continuing narrative, with the coin having to pass from one situation to another in the strip itself -- the coin doesn't just flit from one situation to the next unexplained. The series ran on a weekly or more frequent basis in the weekday editions of the  New York Evening Telegram from October 30 1909 to June 18 1910, quite a long run for a series in that paper.

If that seems like a substantial series, though, an imitator of Carey actually managed to outdo him. In 1930, when the Chicago Tribune instituted a new policy that their Sunday comics would include topper strips, Frank King of Gasoline Alley came up with That Phoney Nickel, an outright copy of Ed Carey's by then long-forgotten strip. The only change was the denomination of the coin. The inexpensive coin made the stakes much less dire, and King kept his narrative in a lighter vein. Carey's fifty cent piece in 1909 was a pretty substantial amount in a time when an unskilled laborer might be paid less than ten dollars per week, but a nickel in 1930, even in Depression dollars, wasn't all that much.

What also interested me about this strip is the coin itself. I wondered if a 'plugged' coin, a term used often in the strip, was a counterfeit or something else. You've certainly heard the phrase "not worth a plugged nickel" to mean something utterly worthless. But my online research about the subject has not really led to definitive answers. It turns out that a plugged coin is one that has had a hole drilled in it, and then the hole has been patched, usually with a cheap metal. Although there is a pretty good consensus online that this was at one time done in order to remove a plug of expensive metal (gold or silver) from the coin and substitute a cheap one (lead or tin), there's a problem with the story. When I search for actual examples of plugged coins online, all I can find are ones that have had a small hole plugged --- these are obviously coins that were drilled out to be strung on necklaces, not to remove a comparatively tiny bit of the metal. If you were going to try to turn a profit on drilling out coins, you would certainly make a bigger hole than in the ones I saw.

That then brings up a side issue. If a coin had a hole drilled in it, for jewelry or any other reason, did that make it no longer legal tender? Why else would anyone bother 'plugging' a coin (sometimes quite artfully, I might add), but so that it could be used in commerce? That theory doesn't seem to pan out, though. According to the U.S. Mint, as long as a coin can be identified as such -- in other words, not utterly and completely defaced beyond recognition -- then the coin is valid tender, and if it is so bad that merchants will not accept it, the bearer can take it to a federal bank to trade it in on an undamaged one. Of course that's the rule now. What it might have been a hundred years ago I haven't been able to determine.

The question that I think makes for an interesting little etymological mystery, is whether people referred to outright counterfeit coins as 'plugged' in those days. Perhaps the term, which originally meant a drilled coin, was gradually redefined as a bad coin of any kind. There was certainly no shortage of counterfeit coins then. If you wonder why counterfeiters would bother with the seemingly tough job of making faking coins, as opposed to running fake paper currency off of a hand-crank printing press, the answer is simple -- in those days coins were worth comparatively a lot more than they are today, and people were less likely to carefully examine a coin, as opposed to paper currency, before accepting it. Therefore, there are lots of known examples of coins counterfeited back then, many so well done that even coin collectors are often fooled by them.

Comments:
The idea of following the adventures of an inanimate object had quite a vogue in the 18th Century, when there were many of what scholars now call "it-narratives" actually told by the objects in question. Charles Johnstone's 1760 "Chrysal, or The Adventures of a Guinea," narrated by a coin, was one of the earliest and most popular it-narratives, and supplies a precedent for Mr. Carey's strip.

Fascinating info, Patrick! Sounded like an interesting read and I found an online source for that novel:

But on reading the first few pages, I was already drowning in that purplest prose. I guess I'll stick to Ed Carey's version.

I'm downloading it as I write, and I'm sure I'll read it, since I have a very high tolerance for 18th Century prose - lit professor and all - and I have never read this one.

A plug nickle refers to a small plug of silver added to the centre of the at minting to bring it up to face value. A plugged coin is a coin that has had that piece of silver removed.
Dan.

Great strip by the way.